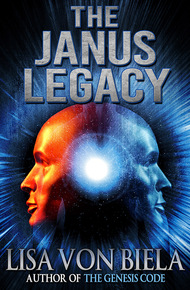 Lisa began writing dark fiction just after the turn of the century. Her very first short story appeared in The Edge in 2002. After working in IT for 25 years, Lisa dropped out of everything—including writing—to attend the University of Minnesota Law School. She graduated magna cum laude in 2009, and now practices law and writes in the Seattle area. On the writing front, she's made up for lost time since law school and is now the author of the novels THE GENESIS CODE, THE JANUS LEGACY, BLOCKBUSTER, BROKEN CHAIN, DOWN THE BRINK, INCIDENTAL FINDINGS, and SCORCHED EARTH, as well as the novellas ASH AND BONE, SKINSHIFT, and MOON OVER RUIN.

Jeremy Magnusson's life changes forever when his estranged father, the renowned physician Ivan Magnusson, is unexpectedly killed in a plane crash. Recently dumped by his girlfriend and suffering from a serious, likely fatal disease, Jeremy faces a choice: Take over SomaGene, Ivan's highly successful custom organ cultivation and transplant operation, and inherit all his wealth. Or turn the job down and inherit nothing.

Only later, once he's assumed the position, does Jeremy realize his father left him more than the company. He's left Jeremy a special gift. A gift with the power to bring him everything he wants in life, but one that comes at a horrible cost, with repercussions and consequences he could never imagine, and that could very well change not only his life, but the lives and deaths of millions across the globe.

THE JANUS LEGACY—is it a gift or a curse? Does it bring life or death? Is it a miraculous new beginning for the human race or a step closer to the end of everything?

Some doors should never be opened…

The Janus Legacy by Lisa von Biela (dubbed "queen of the medical thriller" by reviewer Josef Hernandez of The Examiner) follows the inexorable logic of Ishiguro's Never Let Me Go to its bleak conclusion. When the scion of a pioneering bioengineer inherits his father's wealthy organ culture and transplant operation, he finds out that it comes with unpalatable strings. However, the heir cannot deny the fruit of the poison tree, because he suffers from a degenerative disease that only his father's research can forestall. But what nobody knows is that the ramifications of this research, poised to be globally monetized, go beyond the physical. – Athena Andreadis

His eyelids fluttered open. Bright lights flared and stabbed at him. He shrank back from the unfamiliar, painful sensation, but something hard and unyielding seemed to confine him.

Of their own volition, his knees drew toward his chest, toward the universal posture of comfort and security, but something unseen limited his range of movement. He opened his mouth and gasped for air as panic seized him.

He heard voices, but couldn't understand them. Something reached into whatever container imprisoned him and fumbled with something. A haze settled onto him, dulling his senses. Then he heard a sound, a sound so distant now, like two solid items gently striking each other. The fresh air vanished, as did the harsh light.