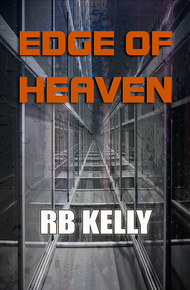 RB Kelly was born and raised in Northern Ireland, in a home where Star Trek re-runs were rarely off the television and the bookshelves were well-stocked with Terry Pratchett. Her debut novel, The Edge of Heaven, was published by NewCon Press in 2020. It is a winner of the Irish Writers' Centre Novel Fair and has been shortlisted for the Arthur C. Clarke Award. Her short fiction has appeared in a variety of publications, including Andromeda Spaceways Inflight Magazine, Deraciné, and Aurealis, and has been shortlisted for the Bridport Prize. She lives in Northern Ireland with her husband and children. On the Brink, the sequel to The Edge of Heaven, will be published by NewCon Press in 2022.

Edge of Heaven by RB Kelly

2119: The bi-level city of Creo Basse towers over the wastelands of central France. Built as a permanent relocation centre for the dispossessed, Creo has become a hotbed of simmering resentment and unrest. The authorities keep tight control, not least because outlawed a-nauts (artificial humans) are known to hide among its citizenry. In the dark, honeycomb districts of the lower city, Boston Turrow is searching desperately for black-market meds for his epileptic sister when he encounters one of the many ways Creo can kill a person. His unlikely rescuer is Danae Grant, a woman recently made homeless when the bloc she lived in was condemned. Danae knows people, Boston knows where she can stay...

The tinderbox that is Creo catches light when a deadly plague erupts among the populace. Is it really a terrorist weapon unleashed by the a-nauts as the authorities claim, or does that just hide a deeper, darker secret? Danae and Boston are determined to survive, if only to discover the truth; of course, that might be easier said than done...

Edge of Heaven by RB Kelly (winner of the Irish Writers Centre Novel Fair award and shortlisted for the Clarke award) is a fascinating Blade Runner sibling: its replicants, the a-nauts, are equally disposable but gengineered for purposes closer to those of the robots in WALL-E. Both "regular" and "constructed" humans live short, brutal lives in a physically and socially stratified, resentment-riddled domed city in the wastelands of France after climate change has drastically curtailed humanity's options. But now a virulent plague has erupted, ascribed to the a-nauts, while two besieged young people inadvertently meet, fall in love…and, between them, may unearth the truth about the epidemic. – Athena Andreadis

Dawn in a bilevel city was not the kind of breathless wash of amber and coral that might send a poet spiralling into fits of literary greatness, even if Creo were the sort of place that had poets. On a good day, from the suburbs of the upper city, it might be a watery yellow smear across the haze where the horizon ought to be. The lower city, shrouded from the sky by a thick blanket of aluminoconcrete and a honeycomb network of supporting walls, was where the sun never shone at all.

Creo, as its residents would cheerfully agree, was a shitty place to live. Creo Haute was bad enough, with its permanent veil of smog and its disturbing tendency towards unpredictable pockets of subsidence that were liable to open up a road-swallowing crater in a vigorous rainstorm. The city was sixty years old, which was twice as old as it was ever supposed to be, and it was showing its age, in the manner of a functional human settlement that was built on top of another functional human settlement, with a four-thousand-foot gap between the foundations and the desert floor. Fissures and sub-surface collapse closed off a block or two every few months, and some of the older buildings were so structurally unsound that you wouldn't want to sneeze on the same street, let alone try and set up home. There was barely room up top for the people who lived there by the time the city fathers closed the doors to immigration, almost two decades ago. These days, when the transports arrived, new citizens found themselves ushered perfunctorily into Creo Basse, where the roof might be getting closer but the ground at least was solid.

For most of them, when the great northwestern gates closed behind them, it was the last time they saw the sky.

As the sun crept softly across the dusty scrubland of central France, a billion tiny sensors buried in the heavy aluminoconcrete skin flipped the city's circadian routines to day, and the dawn cycles kicked in across the dark streets. Scattered across the districts, peppered along the district walls, chasing the shadows up towards the high city roof, the light-bands that striped the paintwork of the upper storeys began the slow rumble up the colour wheel from syrupy blue-black to sunrise coppers, and daylight broke quietly across the sunless city. It crept over the street stalls of downtown Delphi, the seventh district, huddled in tight against the southeastern perimeter wall, and over the constant wash of freight trains through The Wharf in district eight. It climbed the high towers of Victoria's financial sector and the casinos of South District and Parnasse. It made its way lazily across the mobile city streets, across the permanent tide of human traffic that ebbed and flowed and never quite dried up – heads turned up into the holoscreen pergola that flashed a kaleidoscope of news and commerce above every thoroughfare, heads turned down towards the streets because you never quite knew what might be lying abandoned on the sidewalks of the lower city. It glanced off the teeming rain of Dog Island, poured through the south west wall of the twentieth district into Mère de Martyrs, where a scattering of burnt-out cars testified to an interesting evening's entertainment. It flowed north along smoke-dusted streets, through a set of aged gates that reached up past the light-bands and into the darkness, and into the nineteenth district, which was known to the locals, somewhat Byronically, as Limbe do Cielo. The edge of heaven.

Limbe do Cielo was not the worst place in the world to live. Granted, an objective observer might suggest that it would be possible to number the worse places using the fingers of one hand; two, if they were feeling generous. Some of those places were also in Creo. A charitable assessment might call it 'colourful,' and it would be difficult to tell, from context, whether that was colourful like an explosion or a bloodbath is colourful, or colourful like a chimeric cultural melting-pot. Certainly, it was possible to walk the streets of Limbe and hear a different language every time you turned a corner. It was the sort of place where casual insults were traded as terms of endearment, where outsiders were met with a black wall of hostility and resentment, and insiders wore their belonging with the kind of pride that could start a war.

And it was raining. It was raining with the sort of slow, focused concentration that spoke of a backed-up precipitation cycle that had threatened to empty for days: the kind of determined, persistent vertical wall of water that soaks through coat and clothes and skin and settles into the bones. It was raining hard. And it was currently falling on Danae Grant, who was glaring up at the ceiling as though sheer force of hatred could stop a downpour.