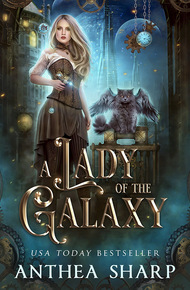 USA Today bestselling, award-winning author Anthea Sharp grew up on fairytales and computer games, and melded the two in her award-winning Feyland series. She makes her home in the Pacific Northwest, where the mystical forests provide inspiration for her newest series, The Darkwood Chronicles. Find out more at www.antheasharp.com

A Lady of the Galaxy by Anthea Sharp

Steampunk with an intergalactic twist! Enter a fantastical world filled with alien spacecraft and Victorian sensibilities, formal balls and travel to the stars.

When Lady Elizabeth flees Earth, she assumes a new name and persona—but her noble family is still searching for her. With the help of a few friends and a feline companion, she stays one step ahead of the bounty hunters, but the future has a few surprises in store…

Explore this alternate world from USA Today bestselling author Anthea Sharp in four tales filled with ball gowns and nano-tech, steam power and aliens, and the timeless nature of the human heart.

Apparently, I was there at the birthing of this series of stories, featuring Liza Roth and her "feline companion," who sounds less like a companion and more like a boss…oh, wait! That's what cats do. They take charge. Anthea wrote the first story in this series at one of our workshops, and then expanded the series to include novellas and a novel. So if you like this (and I'm sure you will), you'll find a lot more good reading ahead. And one last thing: this book is exclusive to the bundle. – Kristine Kathryn Rusch

Alone in Suite Four, Liza watched the gray cat devour the biscuit. It was a dainty little creature, even in its obvious hunger, licking up any stray crumbs and then grooming its whiskers when it had finished. The wings on its back rustled softly.

At the sound of her voice, the cat looked up, regarding her with unblinking purple eyes. At least it wasn't afraid of her, but Liza dreaded what was coming next.

She knelt down by the cat and laid out the pillowcase she'd nicked from the vast ship's linen closet. As the creature watched, she reached into the pillowcase and tucked the second biscuit into the back corner.

"You're going to have to trust me," she said, holding the pillowcase open. "I can carry you out of here with the laundry, but after that, things are going to get complicated."

By all the bright stars, this was so risky—yet she had to try. She prayed that her solution for smuggling the cat off the ship was the same way the animal had been brought on board—the animal's life signs concealed by the warmth and beat of a human heart. Hopefully, Liza wouldn't bear claw marks for the rest of her life.

The cat tilted its head, then stood and slowly walked forward. It sniffed Liza's hand, then continued into the tent Liza had made. Fur the texture of spun silk brushed her hand, and she got a good look at its hindquarters as the cat went all the way into the pillowcase.

Carefully she gathered up the case. The cat let out a barely audible purr, the needles of her claws lightly pricking Liza's arm through the fine cotton. Step one, accomplished.