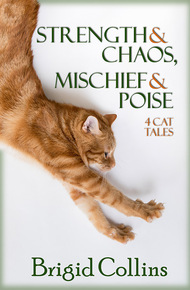 Brigid Collins is a fantasy and science fiction writer living in Michigan. Her short stories have appeared in Fiction River, Uncollected Anthology Volume 13: Mystical Melodies, and Mercedes Lackey's Valdemar anthologies. Her fantasy series Songbird River Chronicles and her dark fairy tale novella Thorn and Thimble are available in print and electronic versions wherever books are sold. You can sign up for her newsletter at https://tinyletter.com/HarmonicStories or check out her website at www.backwrites.wordpress.com.

Brigid Collins is a fantasy and science fiction writer living in Michigan. Her short stories have appeared in Fiction River, Uncollected Anthology Volume 13: Mystical Melodies, and Mercedes Lackey's Valdemar anthologies. Her fantasy series Songbird River Chronicles and her dark fairy tale novella Thorn and Thimble are available in print and electronic versions wherever books are sold. You can sign up for her newsletter at https://tinyletter.com/HarmonicStories or check out her website at www.backwrites.wordpress.com.

From the domestic house kitty lounging on the couch to the big feline prowling the wilderness, cats capture our hearts every day. These four tales portray some of the faces these graceful creatures wear as they move through our world.

A shelter cat uses her fighting spirit to defend others.

A stray stows away on a ship bound for the stars.

A witch's familiar makes a deal with the fairy king.

And a tiger lives on despite his losses.

Brigid Collins writes the most unforgettable cat stories. She has one, which is in this volume, which I think is one of the most powerful cat stories I've ever read. "Honed, Sharp, and Ready," is an amazing story, by an amazing writer. This book is also one of our exclusives. You can't get it anywhere else. – Kristine Kathryn Rusch

A cat has only three weapons: her claws, her teeth, and her fighting spirit. With these, she finds her strength and gains access to Forever.

Sour odors of urine and feces floated from the inadequate litter box behind Meemee, and crumbs of kibbles grew hard as rocks in her food dish. The few she'd swallowed during the night had left a stale coat on her blunted teeth.

To her left, the single window at the end of the double rows of cages let the rising sun slosh orange rays in to splash off the speckled gray linoleum far below. To her right, the bottom of the silver door leading to the clinic and the Play-n-Greet flared with electric light, and a shadow appeared in the filmy window.

Meemee flexed the stumps of her toes against the cold metal bottom of her cage.

Up and down the lightening hallway, the yowls of cats finishing their first night at the shelter rose and fell as hope gave way to fear. Meemee remained silent as she had all the waking night, reminding herself of the code she lived by and preparing for the possibility that morning would bring the cart man to her cage.

The most important of these weapons is your fighting spirit, her mother lectured from Meemee's kittenhood. If Meemee let her eyes drift closed, she would feel her brothers and sisters huddled beside her as they listened together.

You may lose your claws, or your teeth may fall out, but never, never give up your fighting spirit. It's your key to Forever.

Meemee shifted, curled her tail closer about herself. She'd had Forever once. When her two humans had brought in a tiny third, she'd been asked to give up her claws and the sharpness of her teeth in the name of protecting it. But she would never release her death grip on her last remaining weapon, and as the tiny one obtained its own fighting spirit, Meemee got mean and reclusive.

She'd clung to her fighting spirit until finally her Forever had packed her up one last time and dumped her at the shelter. She still clung to it, even as she questioned what good it could do her now.

They'd called her unfriendly, unfit for a young family that wanted to snuggle a complacent ball of fur. Well, fine. Let them pick out a broken cat. Maybe one of these, who'd handed over their most important weapon after only one day at the shelter, would prove cuddly enough.

The silver door swung open, and the fearful noises of the newcomers disappeared under the rattle and clatter of the cart man's steel cart. The rubber wheels squeaked, and the harsh chemical scent of the painful medicines he worked with rose in sterile wisps. Through the bars of her cage, Meemee observed as other cats cowered when he rolled near. She watched them melt in relief as the cart trundled beyond them. Their day to vanish through the silver door lay somewhere in the future.

Granted, some cats vanished via a volunteer carrying them to the Play-n-Greet, going with families that may or may not be their Forever. Meemee had seen some cats come back from those.

Nobody came back when the cart man took them out.

The cart man pushed his squeaky, rattly vehicle along the hall until its front end dipped into the puddle of sunlight just to Meemee's left. He leaned over and peered into Meemee's cage with a dour face and sagging eyebrows.

The cart man sighed and pinched the metal prongs that held her cage shut. He reached in to drag her out by the scruff of her neck, and Meemee, still dizzy from her failure, swept her stubby paw at him with what shreds of strength she could dredge up.

Her clawless jabs prompted no response, and a yawning sinkhole of despair formed beneath her. It sucked at her, yanking on her tail like the tiny one used to, until she felt the pull through her haunches. She couldn't fight against a creature someone else had already defeated. She ought to give up.

The spiritless cart man transferred her to the empty cage on his cart with mechanical motions, closed the door, and deflated himself with another sigh before wheeling towards the silver door.

The sucking sensation grew within the confines of the smaller execution cage, pulling on Meemee's tail, whiskers, fur. Give up, it growled. Turn over your last, useless weapon.

Meemee trembled in the center of the cage, not with fear, but with the tightening of her grip on her fighting spirit. It might be useless against what awaited her beyond the silver door, but without it she would get no Forever.

The front of the cart banged against the silver door, and the pull of despair used the jolt to throw her against the back of the cage. There is no Forever; it's a lie. You know it, just like every other cat in this shelter. Give up!

Through the opening doorway before her, Meemee saw the long white flare of light from the clinic's ceiling reflecting off the metal table and all the implements awaiting her there. The air on the other side hung cold and heavy with a too-sterile odor that scoured the insides of her nostrils. But as the cart man pushed Meemee's cage closer to the doorway, the air within the bars darkened. It coalesced around her like a specter, reeking of hatred and sulfur. She tasted her own whiskers burning. It roared in her ears so she couldn't hear the squeaking of the cart's front wheels as they bounced over the threshold of the silver door.

All that awaits you is death. Give UP.

Meemee snarled and arched her back. Never.

Then the front of the tiny cage passed through the doorway, and crackling energy skipped along her spine. Blue light blinded her, but though fear lashed at her, she kept her eyes open and her nose pointed straight ahead.

The light receded to reveal the front of her cage melted away, and a forest glade in full bloom before her. The energy still crackled over her tail, but without a backwards glance at the shelter or the cart man, she gathered herself and leapt into the Forever that her fighting spirit had unlocked.

If she had looked back, she'd have seen the shock on his face melt into the tiniest spark of relief.