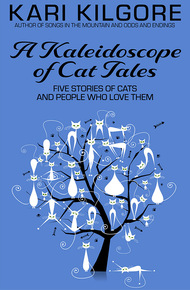 A Kaleidoscope of Cat Tales by Kari Kilgore

And their irresistible charms inspire their human companions to spin yarns almost as varied and wonderful.

Join cat-owned human Kari Kilgore on a journey through the genres and joys of cats and their stories.

Includes The Inn, the Black Cat, and Two Halves of the Same Heart, In Service to a Superior Species, Wicked Bone, Survivors of the Malance, and The Magic Cat of the Hidden Springs Inn and Spa

Kari Kilgore also writes amazing cat stories, some of them set at the Hidden Springs Inn and Spa. The cats there have magic…or maybe they're just cats, and I'm being redundant. This volume is one of our exclusives. Pick it up here, because finding it elsewhere is impossible, even with feline assistance. – Kristine Kathryn Rusch

A Kaleidoscope of Cat Tales

...imagine turning a magical kaleidoscope that gives you a different sort of cat (and cat story) with every view...

The Inn, the Black Cat, and Two Halves of the Same Heart

Sometimes a Change in Perspective Makes All the Difference

Lafayette rumbled against Suzie's chest, then turned onto his back. He batted at her carefully arranged side ponytail, then at the huge swinging earrings that matched her necklace.

When she laughed, both Lafayette and Lloyd drew back in the same sweet, surprised way.

Which made her laugh even more.

This could turn out to be a fantastic way to spend the day, with a nice guy and a sweet kitty.

"I'm pleased to meet you too, Lafayette. How do you get him to leave those trees alone?"

Lloyd rolled his eyes. "Now that would be a trick. He's obsessed with knocking ornaments out. We'll probably spend the afternoon picking them back up again."

A Chance for Survival, or the End of Everything

Thora clucked her tongue to get Derwyn's attention before he ranged too far ahead and forgot what they were out here for. The gen mods to make these domestic cats larger and more suitable for hunting or protection left them markedly different from typical housecats. But they were still quite capable of being distractible, and stubborn about focusing again.

Filan raised up on her back legs, pushing her broad head into Thora's palm. Pointedly reminding Thora that while Derwyn ranged ahead after those silly fluttering birds, Filan was right by her side, doing what she was supposed to.

Watching out for threats. Keeping her eyes and nose out for game. And checking for traces of the PureHuman settlement that was supposed to be out here.

"Yes, you're a good big kitty," Thora said under her breath, rubbing Filan's head. "I expect you'd be off like a shot if a raccoon ran in front of us, but we won't worry about that right now."

Both Filan and Derwyn stood with their backs as high as Thora's knee, and they could easily reach her waist when they stretched. Her hand covered the tops of their massive heads, but not by much. Their huge, rumbling purrs were wonderful to go to sleep to.

Katie groaned. "Why can't you wait until Ken gets home?"

Pashmina blinked her seductive, languorous blink and purred even louder.

"Good kitty," Katie said under her breath. Ken said she had to praise Pashmina for her excellent hunting feats, no matter how messy or how often. "Brave kitty. Clever girl."

Pashmina rolled onto her back, but Katie had finally learned not to fall for that trap. Cat requests for a belly rub came with claws and sometimes teeth right behind.

The ways of the tiny house panther's hunts were still foreign and mysterious to Katie, and she thought they always would be.

In Service to a Superior Species

After stopping to send up his perky greeting to each of the relatively happy cats, Bitu stopped in front of Moxie's home away from home. Rather than raising his head and calling out his version of "Good morning," he sat, wrapping his tail around his feet.

He purred softly, watching the bars the whole time.

Janet walked over just as quietly, peering inside instead of reaching for the bars right away. Moxie had scooted her bright pink cushion as far away from the front as she could get it, nearly blocking the door to the litter box area. She'd piled a purple fuzzy blanket up on one edge like a tiny barricade, so only a hint of sleek, pure black showed.

After a few seconds, Moxie raised her head. One orange eye opened, then the other. She slow-blinked at Janet, lifted her slender tail in a dainty greeting, and snuggled down behind the blanket again.

The Magic Cat of the Hidden Springs Inn and Spa

Exit to the Best Holiday Gift of All

"Then let me welcome you to the Hidden Springs Inn and Spa. I'm Henry, and that overly friendly kitty at your feet is Zortea. Want me to help bring your bags in now, or are you hungry? Wait, she doesn't like…"

The words died in his throat as Zortea snuggled in the strange man's arms. The rather handsome strange man. She purred loud enough for Henry to hear over the music.

"Zortea, huh? Little Zee? I'm Steve, and you're about the sweetest magic cat I've ever met." He looked up at Henry. "Just show me where the food is, Henry, and I'll help myself. I'm about half-starved."

Henry shook his head, trying not to stare at Steve.

At Zortea. He was trying not to stare at Zortea.