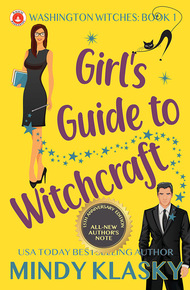 USA Today bestselling author Mindy Klasky learned to read when her parents shoved a book in her hands and told her she could travel anywhere through stories. As a writer, Mindy has traveled through various genres, including light paranormal, romantic comedy, hot contemporary romance, and traditional fantasy. In her spare time, Mindy knits, quilts, and tries to tame her to-be-read shelf.

Jane Madison has a problem. Or two. Or three.

She has a desperate crush on her Imaginary Boyfriend, a man who doesn't know she exists. Her doting grandmother insists she meet her long-absent mother. She's working as a librarian, trapped in absurd costumes and serving up lattes in a last-ditch effort to keep her employer solvent.

In lieu of a well-deserved raise, Jane is allowed to live in an ancient cottage on the library grounds. She soon discovers a hidden chamber filled with magical books that awaken her inner witch.

Will magic—and David—solve Jane's problems? Or only bring her more disasters?

Mindy Klasky's urban fantasy is a classic in its own right. If you've never read A Girl's Guide to Witchcraft, you're in for a treat. This is an anniversary edition, with a new introduction by Mindy. Feline familiars, magic, and a hapless heroine, learning the ropes. This novel will make your day, if not your week. – Kristine Kathryn Rusch

A wooden reading stand occupied the center of the room. It was made out of the same dark wood as the bookshelves, finished with the same soft gleam. The surface was slanted toward me, and I was reminded of those high-end architect's desks that seem like they'd be the ultimate in elegance and sophistication, but which I'd always feared would lead to a strained neck, a backache, and a checkbook full of buyer's remorse.

A single book rested on the stand. Its leather cover was stained and weathered, as if it had been caught in more than one rainstorm. Its pages rippled between the covers, sheets heavier than ordinary paper. Parchment, then. I looked for a title on the spine, but there was none.

My search took me to the side of the stand, and I discovered a statue crouching beside the high table. It looked like an Egyptian cat with its tail curled around its front paws, a guardian from a mummy's tomb, but it was huge. The thing came up to my waist, and as I took a step back, the cat's eyes seemed to stare out at me, somber and unblinking. They were made of glass or plastic or something, and they glittered as they reflected my candle. I resisted the urge to put my hand on its head.

I was afraid it might be warm to the touch.

Instead, I looked around the rest of the room. In addition to a couple of thousand haphazardly strewn books, there was a large hump-backed chest in the far corner. It looked like a steamer trunk, with peeling leather and a broken padlock that made me think of the Titanic.

And there, against the far wall, was an armoire. One door stood open, revealing a tangle of clothes—velvet and satin and a twisting length of feather boa. Both the trunk and the armoire were made of the same mahogany wood as the shelves and bookstand. They were all bare of any decoration, any initials, any design that might hint at who had owned them or left them there.

Next to the armoire was a huge couch—ancient black leather that was cracked and battered as if the furniture had come through a storm. Half a dozen pamphlets were strewn across its cushions, and I wondered who had last read them. Who had—apparently—expected to return in short order.

My cell phone chose that moment to fade to black. The static buzz sharpened to a screech as the screen died. I bit off a shriek at the mechanical sound, combining the beginning of a scream with the middle of a gasp, and I ended up sounding like a hiccuping cow. As an eerie, static-free silence filled the room, I couldn't help but glance over my shoulder, to make sure there was still a clear path to the top of the stairs.

Skirting the statue of the cat, I moved around to the front of the tall, tilted bookstand. My hand reached out toward the book. No, I didn't reach for it. I'm not stupid enough to reach out for an unknown book in an unknown library, with a creepy, glass-eyed cat statue staring at me like I might be the Invading Mouse Queen from Hell.

But my hand just didn't recognize the danger it was in. We were in. We, my hand and I.

It reached out, and it turned back the cover, and it flipped past the first creamy, empty sheet of parchment. It brushed against the words spelled out on the title page, words that were dark and strong and printed in that pointy, ornate, gothic font that people use for tattoos that say DEATH or FEAR or some other life-non-affirming thing.

I had to squint to make out the second word. Magicarum? Magic?

The clammy sensation that I'd always associated with the cottage chose that moment to trace my spine again, making my skin dance along my vertebrae. If anyone ever asks you, your hair really can stand on end. At least the short hairs at the base of your neck. And there's no amount of rapid breathing that will make them lie down again. Not while you're afraid. Not while you think something might jump out at you from the shadows.

I made myself laugh, even if the sound came out pretty shaky. Pretending to be defiant, I turned the page, expecting to see more information—the name of the author, or a statement about who had printed the book, something about its provenance.

The next page, though, was filled with script. Carefully scribed Ye Olde English letters marched along, row after row. They made me think of monks sitting at long tables, holding quill pens and shivering as they reproduced countless bibles.

No monk, though, would have written the words that were etched across the top of the page: On Awakyning and Bynding a Familiarus.

A familiarus. A familiar, surely.

I had read about the Salem witch trials. I knew about those poor old women who were accused of speaking to the devil through black cats. (Yes. Black cats. Like the statue beside the bookstand. That chill rippled down my spine again.)

I told myself I couldn't run upstairs now. It wouldn't do any good. Not now. Not after I'd learned about these things in my basement.

I put the cell phone down beside the book. As I brushed my hair back from my face, my fingers felt clammy on my forehead. I cleared my throat and touched my voicebox, as if the chill would slow my beating heart. I spread my hand across my chest, willing myself to calm down.

When that mental command did no good, I resorted to one of the things I did best—laughing at myself. Purposely making my voice creak like an old soothsayer's, I ran my fingers beneath the words and read aloud:

Bring me your power, your strong second sight.

Hear that I call you and, willing, assist;

Lend me your magic and all that you wist."

There was a flash of darkness.

But this was an explosion of darkness.

My candle flame disappeared. The meager light from the stairs disappeared. The sight of my fingertips, pressed against the jet black word "wist" on the parchment page, the book itself, the table, the room—all of it just disappeared.

And then, it jumped back into existence. But everything was more than it had been before. Everything was sharper, clearer. I felt like someone in the projection booth of my life had just responded to an audience member's drunken roar: "Focus!"

This time, I didn't try to swallow my scream, but I still didn't manage a full Friday-the-Thirteenth Chainsaw Massacre shriek. More a startled exclamation: "What the hell?"

And those three words changed everything. One moment, I was alone in my basement, surrounded by an impossible collection of books, holding a wavering beeswax candle, and trembling in my bunny slippers. The next, I had company.

The statue beside me awakened.

At first, it moved like any other waist-high cat you might choose to imagine. It uncurled its tail from around its paws and stood from its seated position. It shook its head back and forth. It stretched its front paws forward, digging its claws into the crimson and indigo carpet and extracting them one by one. It opened its mouth in a gaping yawn, showing me the ridged roof of its palate and its hand-long fangs, sharper than the knives I'd thrown into the kitchen drawers upstairs.

Before I could speak or move or even think of retrieving my cell phone, the cat tucked its head toward its chest and bunched all four feet together. It arched its back like a Halloween symbol, a rigid curve of spiky fur.

But when it came out of the arch, it was no longer a cat.

I found myself looking into a man's eyes. In the candlelight, I couldn't decipher their color—they might have been green or amber or hazel. They were slightly almond-shaped, complementing strong, angular cheekbones that I would have given my own eyeteeth to possess. His hair was jet black and very short, standing on end as if it had been gelled. He wore the most close-fitting black T-shirt I'd ever seen and a pair of black jeans that were stretched so tight across his crotch that I glanced away immediately. His shoes were sleek leather, vaguely European.

He surveyed me from head to toe, taking a long moment to linger over my bunny slippers. He took his time licking his lips before he settled his right hand on his hip and shook his head. When he spoke, he sounded sadly shocked. "Oh my," he said, drawing out the second word in an amused sing-song. "We have got to get you some better shoes."