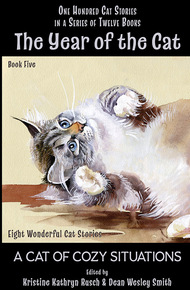 Cats find themselves in all sorts of situations, sometimes comic, sometimes scary, sometimes just plain headshaking. In fact, for some reason, cats tend to draw crazy situations to themselves like the old cliché, moths to a flame.

But nothing attracts cats like a good mystery, particularly of the cozy kind. Cats love crime; they love to solve crimes, to observe humans trying to solve crimes, and occasionally even to commit crimes, because, you know—cats.

The felines in this volume do all of the above and more. Grab a comfy chair and a purring feline, and dig in.

In 2020, Dean Wesley Smith & I did a cat-oriented Kickstarter. We thought it would be great fun to publish 100 cat stories. This, Cat of Cozy Situations, pairs well with Bonnie Elizabeth's book. You'll find two of my stories in here as well. I had a blast editing the Year of the Cat books. If you like this one, go here and pick up the volumes you've missed. – Kristine Kathryn Rusch

Cats find themselves in all sorts of situations, sometimes comic, sometimes scary, sometimes just plain head-shaking. In fact, for some reason, cats tend to draw crazy situations to themselves like the old cliché, moths to a flame.

Actually, I think that is one of the many reasons humans love cats so much. They can go from boring and asleep to wild and in danger in a matter of seconds sometimes. You just never know with cats.

Cozy is a sub-genre of mystery, and cats are a staple of that area. But they are also a staple of all mystery and crime areas.

Kris thought cat stories not limited to cozy, but to all mystery or crime areas, would be fun and I agreed.

That opened up a great deal of stories that we knew about and just picking eight was a challenge.

But it was also great fun. We found many that fit in all the other books in the series, but we felt these eight fit here perfectly.

Here are titles of the twelve volumes of cat stories we are putting together.

A CAT OF A DIFFERENT COLOR

A CAT OF PERFECT TASTE

A CAT OF DISDAINFUL LOOKS

A CAT OF STRANGE LANDS

A CAT OF COZY SITUATIONS

A CAT OF HEROIC HEART

A CAT OF ROVING NATURE

A CAT OF ARTISTIC SENSIBILITIES

A CAT OF FANTASTIC WHIMS

A CAT OF FERAL INSTINCTS

A CAT OF ROMANTIC SOUL

In the earlier volumes and in coming volumes, there are cats in cozy situations that involve crimes. And many stories that have cats in crimes. Seems cats and crimes go together, not only in just the cozy sub-genre. So if you liked the focus of this volume, there have been and will be more in this series. Just the nature of cat stories, after all.

We hope you'll enjoy the ones we picked for this book.

And now dive into mystery, crime, and of course, cats.