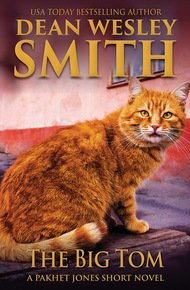 Superhero Pakhet Jones works in the world of cats. She never faces murderers or real evil. At least not until now.

With the help of her partner Diane, superhero detective Sky Tate, and two ghost agents, Marble Grant and Sims, she might be able to solve some of the mystery.

But her best help comes from the big, orange tom cat who ran the downtown area of the city.

Dean has a series featuring the Pakhet Jones, the superhero for cats, in a world of interesting superheroes (the Poker Boy universe, run by Lady Luck). I love the Pakhet Jones stories, and encouraged Dean to write a book about her. He did, and finished it just before this bundle went live, which makes it something no one has seen before. And you'll never forget the Big Orange Tom, after you've been introduced. – Kristine Kathryn Rusch

The large, black tuxedo cat sat calmly on an eight-inch window ledge nine stories in the air. It didn't crouch or even act afraid, although it didn't move. It just sat there like it perched nine stories in the air every day, calmly looking around. Problem was that none of the windows in that area of the condo building opened. Not on that floor or the floor above or below it.

And there were no balconies close at all.

Behind the cat was an expanse of dark window and heat radiated off the glass and the building in shimmers.

I had no idea how the cat got there, but it just looked around like it owned the entire downtown area of Las Vegas on this hot summer afternoon.

My name is Pakhet Jones and I am a superhero in the world of cats. Honestly, I don't just think I am, that is actually my job, and has been now for well over a hundred years. I work in the world of cats. Big cats, small house cats, you name it, I work with them and often save their lives or the lives of their owners.

Or as cats like to call them, their companions. Cats refuse to be owned. Can't say as I blame them.

I am over six foot tall, scary thin, and completely bald. Always have been, which is not that usual for a woman, but a natural state for me, which I had to cover with wigs back in my first hundred years as a superhero. Now I just keep a deep golden tan all over and enjoy the looks I get.

My name is after an Egyptian god of war and means, in so many words, "She who scratches." Yeah, you make me angry enough, that is the truth. But mostly my name Pakhet means a lioness of war, and my focus is as a superhero of cats. I have no idea how my parents way back over a hundred years ago came up with the name, since I was born a long time before I knew, or anyone knew, I would be a superhero of cats. And my grandmothers were named Grace and Edna. Go figure.

I had just teleported into my condo in the Ogden and had changed into my skimpy bikini to head to my "office" at The Beach in the Mandalay Resort and Casino. My office on beautiful sunny days was an air-conditioned cabana on the sand, looking out over the water and waves and tourists that filled the large pool area. I loved to lie in the sun there just like any cat. As a superhero of cats, I also had a lot of their traits, something I didn't mind at all.

Around me my condo was bright, with light brown shades and white cabinets and off-white walls. I liked light and brightness and my two-bedroom condo reflected that.

I had just put on my cover up and a thin silk robe that didn't cover much of anything, and was about to jump to the women's room at the Mandalay Resort when I heard a faint, "Little help would be appreciated."

Now I can hear a cat's thoughts when they are directed at me. Can't hear people's thoughts, thankfully, but I can hear cats. Just one of my many superpowers.

And I can sort of tell which direction the cat's thoughts were coming from. So I went outside onto my balcony on the fourteenth floor looking over the City of Las Vegas and looked down and there was the black and white tom cat.

"How in the world did you get there?" I asked out loud, directing my question at the cat.

I studied the ledge the cat sat on. It was very narrow, not much larger than the cat, and ended in two concrete pillars on either side. Basically it was a window ledge to a set of massive windows of a condo. But those windows did not open.

And who knew who lived behind those windows and if they were home.

At this point that ledge had to be getting very warm, considering the temperature at the moment was climbing past 100 degrees and was scheduled to top out over 110 this afternoon. That black and white cat stood no chance in that direct sunlight and heat for much longer than another hour, if that.

And more than likely the big cat knew it, which was why it asked for help. Cats, by their very nature, hate asking for help under any circumstances. I understood that trait as well.

I studied the ledge as best I could. I could teleport down to the cat, pick him up and teleport back up here before I fell off, but I would be visible to anyone who was looking that way for the few seconds it took me to pick up the cat.

I didn't like that at all. That had to be a last resort. Since I was tall and very thin and had deep golden skin and a completely bald head, I was very recognizable. Especially wearing a bikini and a sheer cover-up.

I was going to need to find a way to get that cat off the ledge without being seen. And I had to do it soon.

I looked off to the right of the cat and a floor down to where a handsome guy with broad shoulders wearing a deep blue dress shirt sat sipping a drink on his deck, shaded by an overhang. He seemed to be talking to two others in empty chairs, and I realized who I was looking at.

That was Canyon Stevens, a superhero working in the area of business. From what I had heard, he was living here in the Ogden as well with two ghost agents named Marble Grant and Sims.

For years I doubted such things as ghost agents existed, but lately stories I had heard from trusted friends told how ghost agents had helped Poker Boy and his team save the world a couple of times.

I had never met a ghost agent. There were a lot of things in my hundred years as a superhero that I hadn't done.

"Be right back with help," I thought at the cat.

That was not a good sign. Cats did not get impatient unless their lives were on the line. Clearly this cat knew the heat would hurt him very soon.