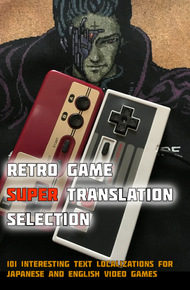 Either you were there when "All your base are belong to us" became a favorited gaming meme, or you need Retro Game Super Translation Selection I. Kalata compares lines from Japanese games and their English translations, and explains where, why, and how changes were made. – David L. Craddock

A good translation might give you some insight into the process that goes into localization. A bad translation may be humorous, while unusual expressions might come from knowledge obtained by learning English or Japanese. Text alterations can be an example of the differences between Japanese and American/European gaming culture, and so on. We have a total of 101 "omoshiroi" translations from various 8 and 16-bit games, so even if you're intimately familiar with game localizations, hopefully you'll learn something you weren't previously aware of. Furthermore, books focusing on retro games are common these days, but there aren't many that focus on localization. I hope this book can be useful to deepen everyone's knowledge on the subject.

English: "Now, I have but one command to give you guys, "WIN"

The above lines are displayed at the beginning of the final chapter, "Last Stand". Crea is actually the hero's girlfriend, so she tells him with an uneasy look to "Come back alive". On the other hand, the face isn't displayed in the English version, leaving it unclear as to who's speaking. Based on the dialogue, it seems to be the Captain, since it's more forceful. It actually sounds a little more inspiring this way.

Typically, Japanese games wouldn't use a masculine captain in cases like this. The industry, and the audience, usually wants to see conversations between a manly soldier and a cute girlfriend. However, American and European gamers may be more motivated by a fierce speech from their commander. It's an interesting translation that shows the differences between Japanese and American gaming culture.