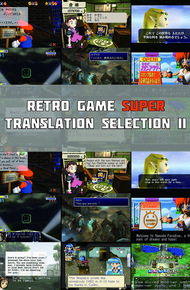 A sequel to the first Retro Game Super Translation Selection book originally published in 2017, this volume analyzes even more lines of dialogue from classic video games, compares how they were localized, and includes some explanation for the business or cultural reasons surrounding such changes. Originally authored by a professional video game translator, this is a localized version of a doujinshi released at the Game Legend retro game event in late 2019, and features a unique perspective rarely seen in the English speaking world! The new volume focuses on games for the PlayStation, Saturn, Nintendo 64, and Game Boy Color.

There's no shortage of entertaining, questionable, and otherwise memorable translations in video games—and that's a good thing for fans of Hardcore gaming 101 founder Kurt Kalata, who returns to explain more of the business, cultural, and other reasons for such changes. – David L. Craddock

It's been three years since the publication of the previous volume. The difference from the prior book is the era of games that we're focusing on. The first volume focuses on the 8-bit and 16-bit era, for games on the NES, SNES, TurboGrafx-16 and Genesis, while this volume deals with the next generation, focusing on the PlayStation, Nintendo 64, and Saturn, along with the Game Boy Color.

Overall there were many more games for these platforms, and many more of them were localized into English as well. We've included a number of popular (in Japan) titles as well as some lesser known games, so hopefully you'll be exposed to something new and interesting.

In the Saturn strategy game Dragon Force, there's a military commander for the Tristan Empire who was once the leader of a group of bandits. In the Japanese version, his name is Joshua, but his name has been changed to Scar for the English version. This seems to be because of the large scar on his face, which may seem a little obvious, but there's another interesting point about his name.

Joshua's face was scarred by a female warlord named Grace, who is part of the rival Fandaria Empire, who singlehandedly annihilated Joshua's bandits. In order to avenge himself and his former compatriots, he decided to join the Tristan Empire to gain the power necessary to fight back. In the English version, Grace's name has been changed to Scythe. The two names contrast each other - Scythe and Scar - as "The person who dealt the wound" and "The person who has been wounded". Also, it may be coincidental, but both names also begin with "sc", creating a unifying dynamic not present in the original Japanese text.