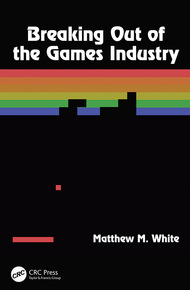 Dr. Matthew White is a game developer, data scientist, professor, and entrepreneur. Managing Director of Whitethorn Digital LLC, Matt spends most of his time making games and consulting for various entities in the games industry. Previously at Volition, Playstation, Penn State, and many startups, Matt has spent over 10 years making games in one way or another. In his free time, he also reads, plays games, homebrews, and tries his best to have a social and family life. He's an educator originally, and still does his best to teach students how to make things that make people happy - though how successful he is in this endeavor is a matter of some debate. With two other professors, Matt developed Penn State's game development program, which helps students augment their degrees by applying their major concentration to the games industry. The program grew over 300% during his employment there.

Breaking Out of the Games Industry by Matthew M. White

This book offers a perspective into a phenomenon becoming more and more common: AAA developers 'going indie'. Written through the personal story of the author finding his way into the AAA games space, only to retreat back to indie games and consulting work and finding a new-old life making games for himself, and finding fulfillment in doing so. It is both a word of warning to creatives seeking a corporation and a call for disillusioned developers to break free and do something wild, creative, and unexpected. It is critical of common industry issues such as structural crunch, health issues, work life balance, and more, but is also a personal story of mismatched needs in doing creative work.

We've come a long way from "Press A to Jump"—or have we? Matthew White follows triple-A (big budget) game developers who left the megahit space to develop indie titles. What's the same? What's different? How can one succeed in so creatively diverse a space? It's an excellent read for developers considering the same move. – David L. Craddock

Before diving right into this book, there are a few laundry items I'd like to get out of the way.

• Game developers are people first, professionals second. This means that when discussing their personal anecdotes, they may say things that offend, have opinions that are unpopular, or otherwise upset you. While I of course made sure these interviews are professional, they have not been edited for content in any way. There is also some profanity, particularly as the interviews drag on. We're foul folks; what can I say?

• This book is designed to read as a guide to making a major change in your game development career and life. It's not here to advance any one "type" of game development as more "real" or "authentic" than any other. It's also not here to single out any company, genre, company size, budget, monetization model, or otherwise. If you're looking for a book to bash what you see as woebegone trends of the industry, this isn't that book, though we'll certainly delve into those topics.

• A large chunk of this book is devoted to the curious, interesting, and odd personal, first-person stories of people who were working in games and decided it was time for a change. Some of these come from a place of positivity and creativity, others, not so much. The stories are told as the developers remember them, and as such are not meant to represent guaranteed facts or statements from either the developers or their current or former companies. Nothing in this book is to be taken as an official statement or stance of any of the companies or entities mentioned herein.

Somewhere between lunch and sunset, I was having my hair cut in a trailer in a sun baked parking lot in southern California. The company had conveniently arranged for a barber to be brought into the lot once a month so employees could line up and get a chop. God knows, it was the only opportunity you had to do so. Somewhere between your regular (games industry regular) working hours, the grueling commutes, and trying to maintain any semblance of a personal life, your options were pretty much limited to getting a $40 haircut in an aluminum fifth wheel, or swallowing your pride and asking your spouse to just shave your head and buy you a skullcap.

A certain absurdity took me by surprise. The guy wasn't a bad barber. It wasn't a bad trailer. It wasn't even a bad haircut. It was the series of events that led me to sit in the trailer that had me feeling a little spacey. You have a lot of time to think when you're unfortunate enough to have an untalkative barber. Skilled though he may have been, this guy surely did not like to talk. The barber shop is also one of those rare occasions where you can't really access your phone, tucked away under the tarp that catches your hair trimmings. So, in a modern rendition of The Scream, I was sitting here, stuck inside my own head with no memes to derail my internal monologue. Save me, doge.

My logic went something like this: the reason I was in the trailer was because I needed a haircut, and getting a haircut myself simply wasn't an option. I was in the office before seven in the morning, and I wasn't out until after five most days. Most barber shops operate in that time frame, so they'd be closed. There were a few others open, but have you ever tried to commute downtown after work in southern California? If you haven't, let's just say getting a haircut was not worth getting home to my wife at three o'clock in the morning. I pondered on.

Eventually, the darker, snarkier part of my brain took hold, as it often does in the postfood three o'clock caffeine lull. Everything about this place, my workplace, was designed so that you never had to leave, or at least so that you wouldn't want to. Food trucks regularly rolled in, the company provided you with snacks and coffee, there were games to play, there were couches to relax on.

Now on the surface, these seem like amenities. Certain "nonsalary perks" any employee should be grateful to have—and that's certainly the case. Believe me, nobody appreciates free coffee more than I do.

There exists, though, a spectrum of employers. Some at the bottom of this spectrum force you to bring your own instant coffee cups, toilet paper, and pencils. On the other hand, some at the top of the spectrum are invested in literally building you a village to live in, deducted right from your salary, effectively closing the loop of ever having you take your cash out of the company. My employers have always been somewhere right in the middle.

After I left the trailer, I started Googling. Other companies, both in my industry and others, did this kind of thing all the time. Bring in a dentist, provide you with an onsite therapist, onsite child care, cafeterias that link directly to your paycheck, education services, professional development services, company stores, even mobile body fat scans and doctor visits.

For whatever momentary malevolent touch of madness that had stricken me, I suddenly saw all of this as a personal invasion. War on my personal life waged by my company, my industry, and the choices I'd made that had led me here.

In that moment, I didn't think of the donuts in the cafeteria as a fun way to reward a week of hard work—suddenly, I thought of them as a very subtle, but very stern, request not to stop for donuts on the way in—in fact, just skip breakfast altogether. The free food and lunch rooms were an invitation to eat quickly and get back to your desk, or if you were feeling ambitious, eat at your desk. The board games and couches? Stress relief to offset crunch and long hours. Some places even have a pseudo-bar on site, and you'll regularly find alcohol bottles cluttering games industry desks, played off as being a perk of working in an industry that isn't "uptight," but masking a much less pleasant reality. Even the apples in the cafeteria and the mobile doctors started to feel like a half-baked apology for making you sit in a chair in a cube for 14 hours a day for your entire adult life. An ultimately hollow attempt to clean the conscience of a middle manager somewhere watching her workforce gradually turn gray and plump.

Every little "service" given to me, in that moment, felt like another erosion of my life that had happened so gradually I hadn't noticed it at all. My personal moments—silly freedoms, like moments at the barber shop, half-intelligible open-mouthed conversations at the dentist, hell, even venting at therapy, were all available to me through my workplace. I started to hyperventilate inside of my climate-controlled carpet cube.

In reality, and I'm sure you'll be relieved to hear, neither this realization nor this book are about the barber in the parking lot. Rather, both are about a certain discordance between my goals and where I'd somehow ended up, and how both I and others have managed to wriggle our way out.