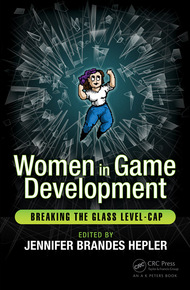 Jennifer Brandes Hepler has been in the games industry for 18 years, starting as a writer for tabletop games before joining Bioware as a senior writer on the Dragon Age series and Star Wars: The Old Republic. After two years as the lead writer on Disruptor Beam's Game of Thrones Ascent, Jennifer is now working on serious games for Kognito Interactive, using game dialogue to teach empathy and communication skills. Jennifer has spoken on gender and game writing at GDC, Games For Change, Geek Girl Con, and EA University.

Videogame development is usually seen as a male dominated field; even playing videogames is often wrongly viewed as a pastime for men only. But behind the curtain, women have always played myriad important roles in gaming. From programmers to artists, designers to producers, female videogame developers endure not only the pressures of their jobs but also epic levels of harassment and hostility. Jennifer Brandes Hepler's Women in Game Development: Breaking the Glass Level-Cap gives voice to talented and experienced female game developers from a variety of backgrounds, letting them share the passion that drives them to keep making games.

Key Features
• Experience the unique stories of nearly two dozen female game developers, from old-school veterans to rising stars.
• Understand the role of women in videogames, from the earliest days of development to the present day.
• Hear first-hand perspectives from working professionals in fields including coding, design, art, writing, community management, production and journalism.
• Get tips for how to be a better ally and make your company and teams more inclusive.
• Learn about the obstacles you face if you're an aspiring female developer, and how to overcome them.
• Meet the human face of some of the women who have endured the industry's worst harassment… and kept on going.

Hepler's entertaining and insightful book is one of the most comprehensive yet. Featuring chapters devoted to studying the works of legendary women in the games industry such as Brenda Romero and "Burger" Becky Heineman, Women in Game Development is a must-read for girls and women eyeing the industry, and for any creator in fan seeking out information on industry heroes, many unsung. – David L. Craddock

"Full disclosure" is a term that gets thrown around a lot recently regarding game journalism. So, in the interests of full disclosure, let me say that I knew none of the amazing women in this book until quite recently. In fact, until they began to face a sustained campaign of harassment to try to drive them out of gaming, it's safe to say that most women in the industry toiled alone, knowing they loved games and wanted to devote their lives to making them, but not how many other women were harboring the exact same dreams.

But as women have been targeted, harassed, threatened with death and rape on a regular basis, faced with an anonymous mob of so-called "fans" who want to drive them out of their jobs, the natural thing has been to reach out to each other. Those who were the earliest victims reached out to comfort those suddenly in the spotlight. And communities of support sprang up everywhere.

Suddenly, instead of working alone, women in gaming were part of a vast network of supporters reaching out to them, face-to-face or online, across companies and countries, publicly on Twitter, or behind closed doors. #1reasonwhy became a Twitter phenomenon that let women voice the horrifying things said or done to them as a result of wanting to be in the game industry. But that gave way to #1reasontobe, an outpouring of women's love for games, which spawned panels at places such as Geek Girl Con and GDC1 to give women a chance to voice what they love best about game development and why they stick with it.

And people whose lives were turned upside down by harassment emerged to find themselves celebrities, a new thing in the world—celebrity feminist game developers!—and in turn reached out to others, to encourage them to keep trying for their dreams. So, though the dreaded "feminist illuminati" never really existed, that very fear has now created a community of female game developers determined to see each other succeed. A group of women who reach out to each other when someone is targeted, who support each other through Patreon and other services during the endemic post-project layoffs. A group of women who come from every discipline in gaming, from industry veterans who have weathered gaming's ups and downs since the 1980s, to rising stars who have burst onto the scene in the last few years.

This book just scratches the surface of the thousands of intelligent, talented, hard-working, and opinionated women who can be found in the ranks of nearly every game company. They have come together to tell you their stories—why they wanted to be in games, how they broke in, the obstacles they've faced, and what keeps them coming in to work every morning, even on the bad days.

If you are a woman, working in or hoping to break into game development, this is the chance you've always wanted to corner some of your inspirations at a conference and hear what they have to say in an unguarded moment. If you're a man in the industry, these are the stories your female colleagues want you to hear, so that you understand that the struggles they face working in games are different than what you see, and they need your support. And if the first time you heard about women in gaming was on The Colbert Report or Law & Order: Special Victims Unit, these are stories you should hear to understand how one of the twenty-first century's fastest-growing forms of entertainment can sometimes be so hostile to the women who create it that they have had to flee their homes in fear of their lives.

In these pages, 22 women in game development tell you their experiences in their own words. In addition, this book provides further information about the latest research on related topics, such as how unconscious gender bias affects people during hiring and corporate reviews, what Imposter Syndrome is and how it can affect talented women, and what really happened during the ongoing harassment campaign known as "Gamergate." And if you're one of those crazy enough or passionate enough to pursue a career in games despite the costs, you'll find tips for breaking into many fields of development, from design and writing, to programming, art, community management, production, and quality assurance. And you can go in armed with the knowledge that even if it gets bad, there are women who have fought those same battles for years and they will welcome you with open arms.

So, pull up a chair, turn the page, and imagine you're at GDC, at the best mixer ever, where no one interrupts and the music isn't too loud. And you're getting the chance to meet some of the best and brightest ladies in the industry, one-on-one. What can they tell you?

Is This a Feminist Book?

Is this a feminist book? How could it not be? Feminism is the belief that women are equal to men, that their ideas and experiences are worth hearing about, that they deserve and will succeed at any of the same opportunities given to men. Writing this book is an act of feminism just like voting, or sending your daughter to college, or celebrating your wife's promotion. This is the feminism that the great majority of both men and women in the developed world believe in, often without thinking about it.

However, there is also the more academic meaning of the word feminism. This is the feminism of Gender Studies classes, and while it is important, it can tend to operate in a rarified sphere of specialized language that can be confusing or off-putting if you're not used to it.

This is one of the biggest misunderstandings about feminism. There are those who see, for example, two female game developers, one criticizing Grand Theft Auto and one loving it, and call that proof that feminism is meaningless. That couldn't be further from the truth. The truth of feminism is that women are people, with tastes and opinions as wildly divergent as men's.

So is this book feminist? of course it is. No book designed to highlight the achievements of women could be anything else. But it is, first and foremost, a "boots on the ground" view of game development, written by women actually working in the field.