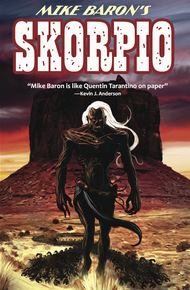 A ghost who only appears under a blazing sun.

Vaughan Beadles, Professor of Anthropology at Creighton University, is at the top of his game. Married to the beautiful Betty, with a baby son, Beadles has just taken possession of the largest uncatalogued post-Anasazi Indian collection in the world. Creighton has long maintained the existence of the Azuma, a previously unknown and extremely belligerent southwest Amerindian tribe.

When a scorpion crawls out of a bowl and bites Beadles' student, his world turns upside down. The university charges Beadles with theft and the police charge him with homicide. He loses his job, his wife, and his future. Beadles' only chance at redemption is to prove the Azuma existed, setting him on a path that will inexorably lead to a terrifying confrontation in the desert with a creature beyond belief.

SKORPIO is included here because – like many – archaeology and the study of the past has always fascinated me. The reason for that fascination is the mystery – the symbolism – the hints of legend and magic. In this novel, the reality of such powers leak straight through into one man's life with harrowing, unforgettable results. – David Niall Wilson

Heat lingered in the desert, even at dusk. The VW bus, wedged between two dusty pick-ups outside the Last Chance Bar & Grill in Gap, AZ, was plastered with Grateful Dead stickers, peace symbols, and flowers, a relic from the dawn of rock and roll. The symbols were barely visible through the patina of dust that descended on any vehicle on the plateau. Even vehicles kept in closed garages were covered with dust.

The Last Chance itself was an adobe structure with viga poles protruding from its brow, a plank porch that ran the length, and a landscape window in which the neon Last Chance light flashed over the small Budweiser. The bar had once been pink but now, like everything else exposed to the Sonoran desert, it was sandy beige. Constant wind whipped through the streets sandblasting everything in its path. It was ninety-eight degrees outside, the only living thing an old dog on the bar's porch, which got up and circled five times before settling down on a filthy blanket. A hand-made Navajo bowl held water.

The only sounds were the wind, the whine of the rooftop air-conditioner, and very faintly, Jefferson Airplane's "White Rabbit."

Inside, Curt Mayweather and Ronnie Potts, seniors and roommates at Creighton University in Creighton, IL, sat at the bar. They were stoned to the gills. Each had a sixteen ounce glass of Rattlesnake IPA before them, ten percent alcohol. Curt hunched over the bar, ballpoint pen in hand, sketching in a Bristol board pad he carried with him at all times. Ronnie looked at the stuffed rattlesnake and coyote over the bar, the tin signs celebrating defunct motor vehicles, WW II nose art, and shootin', the sawdust-covered plank floor, the dart board, and the patrons themselves, four cowboys in boots, Stetsons, and bonnaroo belt buckles the size of Texas, and thought, how cool is this?

Ronnie was five eleven, second of three children belonging to Marge and Daniel Potts of Evanston. Daniel Potts of Stankle, Murphy and Crowder, Attorneys at Law specializing in corporate litigation. Ronnie was a varsity wrestler at 170, working toward his bachelor's degree in Anthropology. After which he would go straight for the Masters while trying to hitch a ride on every archaeological dig he could find.

Curt bent over his drawing. He majored in psychology but was toying with the idea of changing his major to art. He had always drawn, ever since he was a child. He drew in the margins of his books in grade school. He created little flip books by drawing the same image over and over again—with slight variations—so that when you gathered the pages between thumb and forefinger and let 'em rip, you saw a tiny skeleton dance the hoochie-coochie.

His teachers tried to discourage him at first but by the time he reached Junior High, it had become evident to all, even his parents, that Curt could draw. He was an only child. His father was an accountant for Sheldon Property Management in Evanston, and his mother worked as a librarian. Curt was a round-shouldered hulk with a beer belly and a beard. Unlike the other patrons, the students' faces were as smooth and unblemished as freshly laundered sheets.

The interior winked and gleamed through its gloom—Christmas tree lights surrounding the bar, the neon in the window, and the bubbling Wurlitzer in the corner into which Ronnie had plugged a buck in quarters, a full album's worth. He'd searched among the Hank Williams, Johnny Cash, Johnny Paycheck and Merle Haggard that dominated the little rotating selection menus. Nobody so much as looked up when Grace Slick began to wail.

Herders and cowboys, the patrons were taciturn and tolerant and frankly grateful for a change from the usual fare. The bartender was a middle-aged half-Apache with "Muriel" stitched on her blue bowling shirt in red script. Her long grayish hair was tied in a ponytail and she wore a silver and turquoise brooch around her neck. Her skin was the color of brick yet remarkably smooth. Like the regulars, she viewed the two college kids with bemusement. They were so obviously "not from around here" in their cargo-shorts, high-zoot hiking shoes, and backpacks.

Muriel wandered over to where the boys were grooving and looked at Curt's sketch. Even from upside down it was readily apparent as a butte, beautifully rendered in pencil with shading that looked almost real.

"Whatcha drawin' there, hoss?" she said.

Curt reversed the notepad so she could look at it right-side up. "It's this place I keep seeing in my dreams."

A faint shiver trickled down Muriel's spine. She looked up. Damned condensation from the ancient AC. It seemed to her that she'd seen the butte too, but couldn't recall when or where. Maybe in her dreams.

"You ever see this place?" Curt asked.

"Now how would I see that place?" Muriel said. "You couldn't pay me to go out there. I hope you boys isn't goin' out there."

"That's why we're here!" Ronnie gushed. "I mean, I'm an anthropology major and we hear there are all sorts of glyphs out there." He did not mention the other reason, that they had both read Aldous Huxley's The Doors of Perception and wanted to trip in the desert like Timothy Leary and Cary Grant.

"Huh," Muriel said. "Thought you was here for the eclipse. You know not to look directly at the sun, right?"

One of the regulars eased out of his booth against the front wall and ambled to the bar, slightly bow-legged from years of ranch work. He had a face like a Shar-Pei and a white handlebar mustache. He set a glass tumbler on the counter.

Pete gazed over Curt's shoulder at the drawing, which had returned to its original position. "Seems I seen something like that once."

Curt looked up. "Where?"

The old cowboy nodded his head to the east. "Out there. Back when I was young, dumb and fulla come and we used to ride dune buggies out there. Nothin' out there but sand, rattlesnakes and scorpions."

"That's what I'm tellin' 'em, Pete. This here's an anthropologist."

Pete took the kid's soft hand in his rough one and shook it. "Anthropology, huh? When I was a boy we studied ranching, business, and water management."

"Ain't that the truth. Well, you can call me Pete. You goin' out there?"

"Ahuh. Take plenty of water. I mean plenty. Take twice as much as you're thinkin' of takin'. Got any guns?"

Ronnie's grin went wide-screen. "No, of course not. We're students."