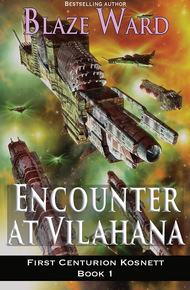 Encounter at Vilahana by Blaze Ward

Now, as a First Centurion, his mission will take him to the distant west, into the very darkness between the galactic arms. He plans to visit those people who live so far away from Aquitaine as to be merely legends.

At Vilahana, he encounters new cultures, new weapons, and new dreams. And makes enemies who try to destroy an entire world unless Phil—and Ground Control herself—can stop them.

Book One of a new Republic of Aquitaine Navy series: First Centurion Kosnett. A sequel to The Jessica Keller Chronicles. Be sure to continue the adventure with Consensus at Aditi.

•Blaze Ward's characters are multilayered, driven, and immensely interesting—much like Blaze himself. His epic scifi series, like the Jessica Keller Chronicles, tell exciting stories spanning a vast tapestry of alien environments…always revolving around a central character in whom the reader can't help but invest. This book, the first in a new series, is the perfect jumping-on point for the universe of Blaze Ward (the Blaze-iverse?) and will get you hooked on his unique storytelling in nothing flat. – Robert Jeschonek

For a long moment, he felt like he was back on the bridge of CS-405, deep in the old Altai region of Buran, before that mad god had finally been slain. Trapped behind enemy lines and deciding to take the war to them instead of surrendering, or just escaping.

However, the moment passed quickly.

Phil had been home for more than seven years now, yet there were still nights he woke in a cold sweat. Tonight, it was probably all the strange bodies all around him.

Given his druthers, he would have done this low-key. A night with close friends and family, since he wasn't likely to be home to celebrate his birthday with everyone for a while.

But First Lord had absolutely put her foot down on this one. And it hadn't been worth yelling at his boss over. Probably.

Phil was having second thoughts as he looked around.

The cake was gone. Cakes. His new Master of the Wardroom had decided to go all in on impressing the new Fleet Centurion who would shortly be in command. Centurion Bottenberg was a hard character to really get to know. They were one hell of a fantastic chef.

Right now, Phil had managed a lull. He'd been exuding bonhomie for the last two hours because the party was huge, spanning two decks and at least seventeen rooms, with spillover guaranteed, as many bodies as Petia had apparently invited.

Was anybody actually at work?

Now, he was tired.

He had a glass of red wine in one hand and was using his height and mass maybe a little more offensively than necessary to plow through shorter and smaller bodies. Still it had gotten him to a quiet corner in a room with no chairs. Not many people in here, and most of them looked like bitey introverts, so they'd leave him alone if he didn't try to suck all their energy out.

Phil smiled and nodded amiably. Probably as good as it was going to get.

The man was much quieter when he stepped into the room, after all the dirty looks and hostile glares he was getting, Fleet Centurion or not.

Phil had found a comfortable spot against a wall, and gestured the man over. They could talk here, if they were quiet. At worst, the folks in here might leave. Nobody was likely to yell at the Guest of Honor, after all.

Fleet Centurion Raizō Tanaka. Commander RAN Kongō. One of the new Bedrov-designed Heavy Dreadnoughts, like Keller had taken to war with Buran when she commanded RAN Vanguard.

An old friend from the Academy, and later from when they were both assigned to the light cruiser RAN Kamakura, where Phil had been First Officer right before taking command of CS-405. And sailing into the history books. Or something.

"Happy birthday, Phil," Raizō said in a much quieter voice as he got close. "Good luck."

Phil nodded. They touched glasses for a quick toast and drank.

"How's Xui Yi taking all this?" Raizō asked with a twinkle in his eye.

"A bit grumpy," Phil replied with a sad smile. "If Yi Wen and Yong Sheng were a little older, I could have seen her coming along on this mission, but the kids are both in high school and finally settled for the first time in their lives. And on Ladaux, so uprooting everyone for this was a little too much. They're all around here somewhere."

"She stuck me at the Academy for three years to hide me from everyone while she built the ship and the squadron, Raizō," Phil laughed. "Had to have me doing time in grade as a Fleet Centurion so she could work on various Senators to finally give me the fifth stripe."

"Like that was ever in doubt?" his old friend chuckled.

"Lots of people on the shore now," Phil said with a sigh. "Too many officers for too few billets. Be glad they built a new ship in Kongō and gave you something to do."

"I had heard a rumor that they considered attaching Kongō to your mission," Raizō smiled. "That would have been fun."

"Maybe," Phil countered. "But this is an exploration mission, and everything we've been able to find out third hand suggests that nobody over there is within maybe a century of where the Republic is technologically, after our two hard wars. Three if you measure how close we came to a civil war over the Horvat Incident. Showing up with a Heavy Dreadnought sends the wrong message."

"When you take out the Bubble Gun and two of the Type-4s, the ship is a lot less intimidating, and it opens up a huge amount of space, so we could haul a massively oversized Ambassadorial force, as well as install a complete arboretum to trade plants and seeds with whoever we meet out there."

Raizō fell silent for a moment. Phil did likewise. His old partner in crime from the Academy days had an evil look in his eyes.

"Who would have imagined where we're end up," Raizō said. "What ever happened to that one girl you were dating, back in school?"

"Unhelpful," Phil glared at the man. "Which one?"

"The planetary development expert, you know, the blonde from New Georgia? What was her name?" Raizō asked.

"Not the marrying type?" Raizō pressed, studying him.

"Maybe, in another life," Phil said with a shrug. "If I'd ended up in academia, or maybe gone into government service as a bureaucrat or diplomat instead of being a sailor. She had never struck me as the type that would happily remain at home alone while I was off flying starships. Too vibrant. Too smart. Too alive."

Phil shrugged. Add that to the other things that occasionally haunted him. Far less fearsome than a broken JumpSail in enemy territory. Probably. Alison had been one hell of a woman.

"There you are," another voice intruded.

This time, the restless stirring turned into bodies suddenly in motion towards the door.

Phil figured that a Senior Centurion would likely be getting yelled at by a Master Chief, if the ranks in this room were different. But he was a First Centurion, Raizō a Fleet Centurion, and the First Lord of the Fleet had just walked in.

Or rather, gotten stuck in the hallway as bodies rushed the door to escape all the damned noise.

Petia Naoumov. She was tall for a woman, almost as tall as Phil. The long, black hair that had been her signature for so long was coming in mostly gray now, but Phil didn't know if that was the stress of the job or maybe she'd always dyed it before finally deciding she didn't have to anymore.

They were close, but there were some questions you didn't ask any woman you weren't married to.

"No, don't go anywhere Tanaka," Pet said as they suddenly had the small room to themselves.

Phil suppressed yet another sigh and considered his boss.

His current boss. It was no secret that she would retire soon, having mostly held on this long so she could send Phil into the darkness on this last great mission. Arott Whughy would take over as First Lord after Phil left, unless something revolutionary happened in the Republic Senate.

"Time for official pictures, Phil," Pet said with a smile. "I need something for my brag wall."

Phil laughed out loud. Nils Kasum had won the war with the Fribourg Empire, but Pet had topped it and beaten Buran. As well as held the Navy and the Republic together when Horvat nearly broke both. All Phil had done was face down an Imperial fleet big enough to grind his little squadron into paste, deal with the future Imperial Consort, Vo zu Arlo, and supply the paperwork that brought down his own entire government and eventually watched several death sentences be commuted to life imprisonment for formerly-important Senators.

"Why me?" Raizō asked with a hint of a teenager asked to clean his room. But he'd been another of Pet's projects over the years.

"Everyone Command Centurion and above," Pet ordered. "Plus everyone who ever served with Phil, whatever ship or command. We're making history here, so we should record and remember it. This group will never assemble again. Besides, I'm the boss and I get to order you mere Centurions around."

But all beginnings require endings. This might truly be the end of two centuries of near-constant warfare for the Republic, that they could send a Survey Dreadnought, a Survey Cruiser, and a support squadron deep across the belt of darkness marked Galactic West on standard nav charts.

Once you got beyond the galactic arm then stars became thin. Spread out. Neither Aquitaine nor anyone else had really expanded that way, when there were so many stars the other directions.

Now, with peace everywhere, it was time to finally look out there and see what there was to behold.

And he got to be the one to go.