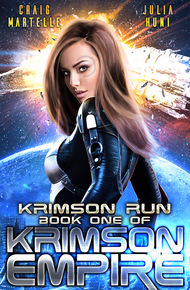 Craig Martelle is retired from the Marine Corps, spending time both as enlisted and as an officer. Then he went to law school, took his law degree into business consulting where he became a business diagnostics specialist and leadership coach. He retired from that at age 52 because he was away from home way too much. That's when he started writing full time, and he had not looked back since. This is a great ride! He has a variety of stories since he's been at this for a little while, lots of short stories so you can see if you like his style. He has a number of bestselling novels in categories that matter to him - space opera, military sci-fi, Space Marine, colonization, and genetic engineering. As a serial daydreamer, it's nice to finally get the stories on paper (virtual and digital paper, that is).

Julia Huni grew up in the Pacific Northwest. After college, she served nine years in the US Air Force. Over the years, she's been an IT guy, a stay-at-home-mom, a college professor, a NASA executive assistant, a NATO branch director, and that lady at the information desk in a tourist town. She's also played piano at church and studied Tae Kwon Do.

The Federation will make you pay for your crimes, even the fake ones.

Tony, a spy from a rival star system who is the scion of a galactic crime family. Quinn, falsely accused former military, betrayed by her husband. A conspiracy that intertwines their lives.

Where did the government go wrong? When they separated Quinn from her kids. She vowed to do whatever it would take to find them and rescue them. They should have let her. Instead, they made her fight. Now Quinn and Tony will make the Federation wish it had taken the easy option.

•High-powered scifi with high stakes, great characters, and tons of surprises; that's what you can expect from this book, and anything written by these authors. Craig—architect of the renowned indie publishing group 20Booksto50K—and Julia—an actual onetime rocket scientist—have brought their A-games to Krimson Run, which is really saying something. I know you'll thank me for including this dynamite book in this bundle, so I'll say "You're welcome" in advance and let you get on with savoring this awesome offering from these two truly stellar talents. – Robert Jeschonek

Tony Bergen hated the capital city of the United Federation of Planetary Societies, but the weather always raised his spirits. Bright sunshine, but not too hot. A light breeze with a whiff of sea salt, but no trace of dead fish. He wasn't sure how the Federation managed it, but Romara's weather was perfect.

The same could not be said for the company. Like all Federation cities, the metropolis was overrun with UFPS security. He'd counted forty-three uniformed agents and twelve undercover. None of them had taken a second look at him, so life was good.

He strode down the perfectly-fabricated cobblestone street—every square meter included one stone set a half-centimeter higher or lower than the rest. The effect was meant to be charmingly random, but anyone with an eye for patterns could see the careful planning. He shook his head. It would have been cheaper—and easier—to hire humans to install the darn things. But the Federation automated everything.

Halfway down the street, he tripped over a raised stone and stumbled into a wall. That gave him a chance to glance behind without being obvious. Twenty meters back, a well-dressed couple chatted as they strolled. In a nearby alley, two children played a game involving a ball and a stick. A small, furry creature sat on a doorstep—obviously someone's pet. A pretty young blonde carried a bag of groceries toward him.

Tony's eyes narrowed. If Federation Security was watching for him, this was where they'd strike—a narrow street, nowhere to run, and few witnesses. He straightened up and strolled onward, whistling an old tune as he walked. The blonde girl smiled at him and slid her hand into her pocket.

Tony's heart rate increased. Was she reaching for a weapon? The children had disappeared. He sidestepped and glanced back. The couple had stopped talking and increased their speed, closing in with a deceptively smooth gait. Tony picked up the pace.

The girl approaching him pulled her hand out of her pocket. Something metallic glinted in the sun.

With a piercing scream, the young woman dropped her groceries and her silver communications tablet. Round, green fruit bounced out of the bag, scattering across the narrow road. The pet hissed and scrambled up a drainpipe.

The well-dressed couple broke into a run and thundered past both Tony and the girl, shouting incomprehensible code as they ran. The woman's left heel pierced one of the green fruits, but she ran on, oblivious to the new ornament on her bright red shoe.

Tony stepped out of the doorway, smiling sheepishly. "That was terrifying."

"You're telling me," the girl said. "I wonder who they were after."

Tony shrugged, then crouched to help her gather the spilled fruit. "These don't look too bad," he said. He picked up the silver device. "Here's your comtab. Good thing you have a high-density case."

"It's weathered a few drops," she replied with a slight smile, taking the comtab. "And the fruit are for a sauce, so it won't matter if they're bruised. Thanks for your help."

She rose and continued up the street. Tony slid the thin, silver chip that had been attached to the comtab into his pocket and strolled in the other direction.