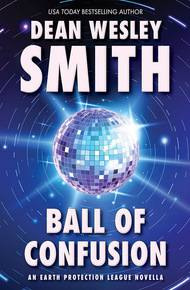 A giant round spaceship the size of Jupiter flashes in from outside the galaxy, clearly out of control, headed directly for the Earth system.

Captain Friday "Disco" Franks and Captain Emma Dakota meet in a nursing home on Earth where she feeds his stroke-ravaged body three meals a day.

Then the Earth Protection League tasks them with not only stopping the giant ship to save Earth, but exploring it.

Another fun romp into the depths of the Earth Protection League space.

•Dean Wesley Smith is a writing machine, pouring his wild imagination into unique stories across a wide range of genres. This one's an example of Dean just having a blast with an out-there science fiction premise…and taking the reader along for the ride. There's plenty of futuristic action in this adventure, plus more than a little wish fulfillment as elderly humans from Earth become young, vital champions in space, fighting the good fight for the preservation of civilization among the stars. – Robert Jeschonek

For two months now, Friday Franks had admired Emma from a distance at Bryant Hills Nursing Home. Usually across the clattering dishes and smell of boiling chicken noodle soup that filled the lunchroom as an attendant fed him the green and brown goo they laughingly called his lunch.

Since he would choke on anything solid, it was the best he could do. Besides, his taste buds had vanished with his ability to move caused by his stroke three years ago, so it really made no difference at all. He just wished the food looked better.

For a woman two years younger than his ripe old age of sixty-eight, Emma had a real glow about her. She kept her long gray hair pulled back into a ponytail, which made her look younger, and she had fairly smooth skin and a smile that could light up the entire sad lunchroom.

Her laugh often drifted over the sound of dishes and light talking like a breath of fresh air over a death scene in a play, almost as if it didn't belong in such a serious event as feeding lunch to the near dead.

She always wore a blue dress that looked more from the eighties than anything else, yet was festive and bright against the white aides outfits and the older clothes of the residents. She always wore just a touch of makeup that accented her blue eyes.

He, on the other hand, wore the same gray T-shirt, old jeans, and a stained bib to catch the food that didn't get dripped into his mouth. Yup, they were a pair.

She just didn't know it yet.

She wasn't a resident here like he was. She was a volunteer. The Earth Protection League had researched her on his request and found she was widowed now for fifteen years, lived alone in a small ground-floor apartment and was allergic to pets. She had no real family and her best friend had just died a year ago, so no real connections.

She was also one impressive person. A former pilot in the Air Force, she had spent twenty years as an airline pilot in a time when not that many women held that position. He knew she still had her own Cessna she called Freedom and managed to get some flight time almost every weekend.

He knew for a fact she would be a great recruit for the Earth Protection League. She had that drive and that intelligence that it took and the skills the League needed. And the League had agreed with him.

So now it was up to him to talk her into joining up. The first trip out into space was always the hardest.

So the League had pulled some strings and got her assigned to feed him at lunch and dinner and today was the first day. He couldn't swallow or move his arms or legs much at all, but thankfully he could still talk, still had his deep, rich voice.

And even at his age, he still had most of his long black hair from his youth. It had thinned some, but the aide that dressed him kept it combed back like he used to wear it in the 1970s, his disco days.

The attendant pushed him into position at the stained lunch table and another put his plate of green and brown goo in front of him. He watched Emma as she worked her way through the tables toward him, smiling, a smile he could come to really enjoy being around. She had the ease of movement of a dancer, just like he used to have.

Just like he still had out on the frontier.

Damn, she actually made his heart race some. Not even in the heat of battle against the damn alien dogs, both blasters spouting fire, did his heart race like this.

"Wonderful to finally meet you, Emma," he said, giving her a smile as best her could. "Call me Friday."

She smiled and sat down. "Friday Franks? I love that."

"Thanks," he said, wishing he could smile a little more. "Actually a lot of my friends called me "Disco" back in the day, so I go by Friday "Disco" Franks."

He didn't add that actually he was Captain Friday "Disco" Franks of the Earth Protection League. With luck, she would know that soon enough.

"Now that's fun," she said, the wonderful smile really reaching her eyes. "I loved disco when I was younger. Those were wonderful years."

He looked her right in the eyes and they held that for a long moment.

A surprisingly long moment, where even the clatter of the lunchroom around them faded into the background.

There really was a connection.

And after a moment she actually blushed, then looked down and picked up the spoon and said without looking up at him, "You ready for some lunch?"

That broke the tension, she laughed, and they started into the humiliating routine of her easing green or brown mush into his mouth and then with a napkin gently wiping away the excess.

What a meet-cute if he had ever seen one.