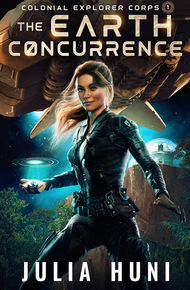 Julia Huni writes hopeful science fiction full of heart and humor. She studied Computer Science and National Security, both of which she ignores completely when making up stories involving computers and politics. While serving in the US Air Force, she worked on NASA's National Launch System to develop a heavy lift launch vehicle, and thus calls herself a rocket scientist.

Julia's published books include the Colonial Explorer Corps series, the Space Janitor books (beginning with The Vacuum of Space,) and the Krimson Empire series (with Craig Martelle.) She's also recently ventured into serial writing with Amazon's new Vella program, for which she is writing a sci-fi secret-agent rom-com set in space called The Phoenix and Katie Li.

She has a spouse, three children, a house that could really use a few cleaning robots, and a dog named Pippin the Wonder Westie.

The Earth Concurrence by Julia Huni

A hero with big expectations. A daughter who doesn't want to live in his shadow.

Siti Kassis, daughter of the "Hero of Darenti Four," doesn't know what she wants out of life. A lot of her friends are taking time to travel and see the galaxy. But her father wants her to attend the Academy and follow in his footsteps.

Then the Hero is offered one last assignment: take a team to find and explore the deserted homeworld of humanity. It's a twenty-year mission, and he doesn't want to leave his only child behind. Siti's going, whether she wants to or not.

It's an exciting mission and a chance to make history—even if twenty years in deep sleep is a bummer of a way to start her "gap year." But when they arrive, nothing is as they expected. Surprising finds and dangerous conditions cause her father to overreact, trying to keep Siti on a tight leash. When unknown enemies rear their dangerous heads, Siti must take matters into her own hands. Can the hero's daughter save the day?

•When the blurb for a book has you dying to know more, you know you've got something special on your hands. That's how it was with this novel by Julia Huni (an actual onetime rocket scientist, by the way). The plot involves a 20-year journey to the abandoned homeworld of humanity in the distant future…a visit that reveals Earth isn't so abandoned, after all, and is crawling with secrets and mysteries. Doesn't that make you want to read more? Best of all, this is book one in a series, promising even more fun, suspense, and danger to come. But can Julia Huni deliver the goods? Let me just ask, can there be any doubt that an author rocks when they've also written a Space Janitor series, and book one was titled The Vacuum of Space? – Robert Jeschonek

"Make a hole!" a voice called over the rumble of conversation. I stepped to the side of the corridor, glancing over my shoulder as I moved. A squad of men and women jogged in formation, their faces focused. As soon as the group passed, those of us pressed against the bulkheads relaxed and returned to our business.

"I wish they'd stay in the gym," a man in front of me muttered. His coverall identified him as a ship's engineer.

"They say it's too crowded now," a woman wearing lieutenant's bars replied with a hint of disbelief. "I think they just like to make the rest of us feel inferior. We haven't woken that many of them, yet."

"How many we got this turn?" the engineer asked.

"Fifty," the woman said. "Plus his excellency and the princess. We'll wake the other fifty when we park."

Anger kindled in the pit of my stomach. His excellency and the princess?

"His excellency?" the man asked. "You mean Kassis? Who calls him that?"

The woman glared at her companion.

The woman's glare faded. "Just something I heard at the club. Don't spread it around. I'll deny saying it."

"He seems okay to me," the man said. "And that nickname sounds kind of derisive. Sir."

"There are a few people who don't love Kassis," the lieutenant said. "And don't forget it." She gave the man a hard look, then caught me glaring from behind him. Her eyes widened a little. "Good morning, Ms. Kassis."

"Good morning, Lieutenant," I replied as I pushed past them. "Sergeant."

"Did she hear us?" the sergeant muttered as I sped away. "Sir?"

I stepped out on the recreation deck and headed for the gym. The passageway rumbled with a dozen different conversations. The ship's crew bustled around me, everyone moving with purpose. They hurried past, discussing scrubber status and drive vibrations and dilithium crystals.

Not really. Dilithium crystals aren't real. They're from an old vid series my dad liked to watch on Ancient TēVē. I thought it was pretty hokey—transporter rays, phasers, and warp drives. And the effects were terrible. But he liked the characters. He said it was a remake of an even older series that originated on ancient Earth. That's why he studied it, I guess.

My name is Serenity Kassis, and my father is Nathanier. Yes, that Nathanier Kassis. The guy who discovered the first sentient non-humans in the system. He liked to tell people it was a team effort, but he was the commander on that expedition, so he gets the credit. And, to be honest, he really was the one who spotted them first.

Exploring new worlds takes a toll, so Dad decided to retire on a high note. But when they offered him one more mission—this mission—he couldn't say no. I wondered why that lieutenant disliked him. I'd keep my ear to the deck and see what I could learn. I'd also access the crew's directory and find out who she was.

This ship, the ECS Return in Glory, was a long-distance vessel run by the Colonial Exploration Corps. The Glory was one of the largest explorer ships, capable of carrying colonists as well as EC teams. We didn't have any colonists aboard this time because the planet we were exploring wasn't open for colonization. Yet.

Usually, the EC sent smaller vessels, like the one my dad commanded on that famous trip to Darenti Four. But a mission of this importance required a larger team. So, the EC refitted the Stalwart and gave her a snazzy new name. She carried a hundred CEC Explorers plus a public relations team. The ship's crew, under the command of Captain Tisha Hydrao, ran the ship, and Dad led the exploration team.

The exploration team, including me, Dad, and the PR guys, had been asleep for the last twenty years while Captain Hydrao's crew flew us to our destination. The crew did shorter shifts in the deep sleeper, but Captain Hydrao stayed awake the whole time. An EC captain could spend half of their career on a single mission. Not the way I'd want to spend my life, but Captain Hydrao seemed to like it. Not that I spent a lot of time chatting up the captain.

The gym overflowed. Long deep sleep required regular exercise to recondition the muscles. I hated working out, but Dad would check my health stats, so I had to keep it up. I slapped my hand on the access plate to log in and wandered to the Refit class.

"Hey, Siti." A young explorer stood by the door. Her red curls stood out from her face in an uneven, frizzy blob. A generous serving of freckles covered her pale nose and cheeks, making her look younger than her twenty-two standard years. She yawned. "I'm still so tired."

"Hey, Marika," I replied. "Me, too. Porter told me the effects wear off after a few days."

"I've been awake for a week, and I'm still yawning all the time," she said, demonstrating again. "There must be something wrong with me. Maybe they didn't give me enough jazz juice."

I laughed. "The system is automated. I doubt they got your dose wrong," I said. "Besides, I'm not sure it works that way. Either you wake up or you don't."

We both shuddered. Deep sleep had been perfected over the centuries, but most civilians didn't know how safe it was. They remembered the horror stories from history class about the early deep sleep colony ships. It didn't help that the techs were required to warn us about the one guy out of four hundred who didn't wake up. Although, with a hundred of us on this ship, that meant one of us had a twenty-five percent chance of not making it. Or something like that. Math isn't my strong subject.

"Have you heard anyone using a nickname for my dad?" I asked Marika as we moved to our stations. "His Excellency?"

Marika sputtered a laugh and clamped her hand over her mouth. Her wide blue eyes peered over her fingers. "N-no."

I narrowed my green ones.

She rolled hers and sighed. "You have to admit it's kind of funny. I mean…" She trailed off.

According to some of the explorers who were with him, the Darentis tried to make Dad their king when they finally understood what he was and where he came from. The Corps had kept that under wraps, but rumors swirled.

"I've never heard anyone in the Corps call him that," she said, pulling her hand away from her mouth and holding it vertical, with the palm out, in the Corps salute. "Who was it?"

"Some lieutenant. Ship's crew, not Corps." The display at the front of the room flashed. I read it and groaned. "I don't want to do deadlifts."