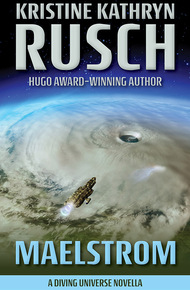 Nedda Ferguson-Lithe lost her father on the Gabriella's final mission. The ship's disappearance remains one of the great mysteries of the sector.

But as Nedda interviews the crew's survivors, she finds more questions than answers.

No one knows who or what causes the maelstroms that make exploring Nájar Crater on Madreperla so dangerous. But everyone knows that the rumors of the crater's riches prove far too tempting despite the danger.

Every time a ship ventures into that crater, a maelstrom drives it out. Or destroys it. Nedda hopes to find out which fate met the Gabriella—and her father.

•A true giant of the written word, Kris Rusch's influence and reputation span genres—though I have to say, she has a special flair for science fiction. Her Diving Universe series has been captivating fans—myself included—for some time now, and this latest adventure keeps the awesomeness coming in spades. As a writer, I love how she brings her characters to vivid life while building suspense amid richly detailed and exotic otherworldly environments. As a reader, I adore the cool factor of the premise—gutsy space travelers seeking lost artifacts and secret truths—and the thrilling, high-stakes payoff of each story as it unspools and connects past and present with an action-packed, mysterious future. – Robert Jeschonek

One-hundred-and-fifty years ago, before plans for the star port on Ius Prime were finalized, ships launched out of Ciudad Orilla on the northern-most edge of Yaguni. One of those ships, the Maria Segunda, took off on a Monday to explore the rim of the deepest crater on Ius Prime's largest moon.

The early inhabitants of Ius Prime named the moon Madreperla because of its luminescent qualities. Even in Ius Prime's intense daylight, the moon glowed.

Rumors floating around Ciudad Orilla promised vast stores of untold wealth inside that crater on Madreperla, from sea creatures with bones made of the finest glass to minerals needed for every single engine. The water that filled part of the crater, the stories went, contained healing properties, and had more nutrients than anything that humans had concocted thus far.

The Maria Segunda, a ship that had land-to-sea-to-space capabilities, set out to learn which of those rumors had a basis in fact.

She arrived on the rim on a Thursday, set down on what her crew thought was an ice shelf, and by Friday morning, found herself in the midst of what the crew later described as an ice storm.

Only it was unlike any storm they had ever seen. A massive wind swirled around them, and they were caught in the center of it. But that didn't stop ice pellets, rock, and other materials that seemed harder than rock from hitting the outside of the ship. The Maria Segunda had defensive shields but they were rotating shields, built to stave off laser weapons. The normal heat and weather shields that any space-to-land ship had were not up to dealing with this particular anomaly, whatever the heck it was.

In the space of an hour, the damage to the ship's exterior was so severe that there was a good chance the ship might not make it out of the relatively weak atmosphere of Madreperla.

The captain, Angela Nájar, ordered the mission abandoned, and then the ship started the lengthy process of attempting to launch in the middle of that storm. The ice shelf—or whatever it had been—collapsed as they fired their engines—and in that moment, the crew learned that the water, which all reports had said filled only part of the crater, was suddenly lapping at the rim.

The ship managed to hover, but couldn't get purchase on anything for a ground-to-orbit launch. Fortunately, Captain Nájar had piloted the Maria Segunda for nearly a decade, and knew how to handle a water launch.

She shifted the controls from ground to orbit to water to air, and somehow managed to get the Maria Segunda away from that rim. The ship also activated its distress beacon as it headed off the planet, a move that saved the crew.

The storm extended from the crater to the outer edges of the moon's narrow atmosphere. No matter what the crew tried, the Maria Segunda could not get away from the ice, rock, and whatever else pounded the exterior of the ship. The storm itself exerted force on the ship, trying to draw it inside the crater, so the Maria Segunda's engines worked twice as hard as normal.

The ship's sensors went down first, followed by its defensive shields. Thankfully, the heat shield held until the ship reached space.

The Maria Segunda limped into orbit, its ability to communicate gone, its hull compromised in all but a few places, its engine damaged, and its crew demoralized. They huddled in the interior storage areas, all except Captain Nájar and her first officer Asima Chandy, who remained on the bridge, attempting to repair what bits of the ship they could using what few resources they had.

The rest of the crew survived, as did all of the ship's logs. The destruction of the Maria Segunda provided the founding brick of information about the mysterious "weather" surrounding what came to be known as Nájar Crater.

Other ships, attempting to mine the rumored vast riches of the crater, also experienced these storms, but none as severe as that which enveloped the Maria Segunda.

Scholars believe that the Maria Segunda received the brunt of some kind of weather system on Madreperla that somehow caused the hail of debris that ended up compromising the ship, and ultimately destroying her.

These storms are called maelstroms because there was nothing else like them anywhere in this sector of space.

No scientist has gotten close enough to study the maelstroms in depth. Any probe sent into a maelstrom gets destroyed within seconds.

Some scientists believe maelstroms are caused by interactions between the engines of any kind of ship and the strange materials inside the crater.

But other scientists dispute that. They note that the ships that got caught in maelstroms were all different, powered by different kinds of engines, and of differing sizes and strengths. There really isn't enough information to uphold any theory on the maelstroms.

But a maelstrom has a powerful effect on those who experience it.

The survivors of the Maria Segunda, to a person, quit working exploration vessels. All but five of them quit working in space altogether. The rest returned to a more regulated and crowded area of the local solar system, preferring to work at lower-level jobs or running schools to train others in space exploration, rather than exploring anything themselves.

Most spacers of the previous century believed what happened to the Maria Segunda was simply bad luck. Ships encounter bad luck all the time, and not all ships survive it.

Essentially the waivers give the rescue units from Ochoa Star Port the legal cover to decide whether or not to attempt a rescue of any ship that has traveled to the Madreperla.

People die on that moon.

But the lure of riches, some of them proven to exist, still tempt ships, ship captains, and crews to that moon, and that crater.

The lure of riches and the promise of adventure.