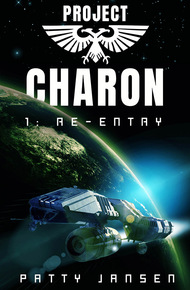 On the backwater world of Cayelle, Tina Freeman runs a shop with her son Rex: fifteen years old, half-human, half-android with a massive chip on his shoulder about having been born without arms or legs.

The shop makes a modest profit, but when a creditor turns up wanting his money back, everything goes pear-shaped.

She needs money, and needs it fast. Another creditor is impossible to find. That leaves her one option: to return to the world she fled fifteen years ago and Kelso Space Station, where her spaceship has languished for over fifteen years, and finally sell the thing.

Tina worked as scientific officer in the Federacy Force's top secret Project Charon, and was forced out when she rang alarm bells about particles that escaped out of a rift to another universe.

As it turns out, the alien dust has been infecting people in her absence, causing profound changes in human behaviour.

When Tina re-surfaces at Kelso, her presence is a threat to those who still defend the project, including her ex-husband, and they want to shut her up, but her continued silence may well mean the end of civilisation.

•This book had me at the mention of sentient cacti…I admit it. As someone who loves to write about offbeat characters, I can't resist a tale that features something bizarre yet intelligent, like this one. Coming from a land of many strange and wonderful lifeforms—Australia—Patty Jansen is a natural at creating such unique species…and she's even better at spinning exciting, character-based yarns around them. I predict this first Project Charon book will win you over in a heartbeat, so make sure your e-reader device or app is ready to load up on the other books in the series as soon as you finish this one. – Robert Jeschonek

Tina was doing the books when the doorbell to the shop rang.

The old-fashioned tinkle was music to her ears. It meant customers, and there were never quite enough of those.

She gladly abandoned her tangled finances, shoving the computer in the drawer with the bookkeeping module still on the screen.

The man who came in, tall and broad shouldered, was not a local but he looked vaguely familiar to her. It wasn't unusual for strangers to come into the shop, even if it was located twenty minutes out of Gandama and only thirty people lived in the remote hamlet of Dickson's Creek.

People around here went to all kinds of lengths to live their lives out of the neighbours' view. It wouldn't be the first time that someone had moved in with family or married a local, or someone had died and the house had been sold and the community only found out months later.

That was how people rolled around here.

She couldn't see his face because he was backlit by the light that streamed in from the window. It was late afternoon and the desert sun was coming in straight from over the dusty fields where the neighbour's farm robot moved backwards and forwards, raking rocks out of the soil.

The stranger wound his way between the shelves and tables displaying electronics and security equipment without stopping to look at any of it.

Tina made herself look taller behind the counter of the shop. She quickly rearranged a box of the latest sensors that she had obtained from a dealer in Peris City last week, hoping he would buy a handful of them. Someone had done that just this morning. Like everything that came from off world, they weren't cheap.

The man came up to the shop counter and placed both his hands on the surface.

Strange hands they were, too. His fingers were stubby and very short. The skin was mottled and his fingers were covered with little elongated flaps of skin, like warts. He had so many of them that he looked like a toad.

His nails had grown in a curved fashion, like the claws of an animal. He had filed the ends into points.

He wore a long-sleeved jacket despite the heat. The top of the zip fastening was open, revealing a glimmer of body armour. Around his waist he wore a belt with large metal eyelets—a pirate belt. Typically, members of the pirate—or Freeranger—gangs wore one of these, usually with an array of weapons dangling from it.

Those belts had become fashionable in Peris City recently, but it still made Tina do a double take when she saw one.

"How can I help you?" she asked, her heart still thudding.

She reached under the counter for the fence post she kept there as a weapon, although it would do little against high-quality armour like that, if thuggery was the purpose of his visit. And she wasn't sure. He looked too clean and civilised for that.

His voice was deep and gravelly, but again, she sensed she'd heard it before. His face, equally covered in warts, was utterly strange to her. The only part of him that didn't make Tina's skin crawl was his eyes. They were brown and clear.

"I haven't applied for a loan," Tina said. Since when did lenders send people who dressed like pirates, no matter how fashionable the attire?

"It's not about me giving out more money. It's about getting my money back."

"I don't understand. Who are you? I don't owe you any money."

"You don't have a loan for this shop?"

"Why should that be any of your business? I don't even know who you are."

"I do, but I have never missed any payments." Because getting tangled up with unscrupulous lenders was one of the ways people got themselves into trouble in Gandama.

And it was only at this point that she figured out who he was.

When she had started the shop, Tina had borrowed money to buy the premises off one of the town's loan brokers. The money came from a rich citizen of Gandama. She had met the man a few times, but he had later moved to Peris City, leaving the administration of the loan to a broker. For years she had made regular payments.

Was this really the same man?

She couldn't clearly remember what he had looked like back then, but she would have remembered if he had all those strange warts on his face. What sort of horrible condition was this?

She stammered, "I'm sorry. I didn't recognise you."

And, looking at his face, she still didn't recognise him, his disfigurement was that bad. But now that she thought of it, she did recognise his name.

He snorted, but didn't comment on it. "Yes. It's unusual for the lender to ask for a return of the funds, but I have a situation where I need the money quickly. It's medical, you must understand."

"Yes, I understand." Shudder. Whatever was wrong with him?

"Good, then I want the entire amount repaid in full within three days."

"Sorry—I didn't hear you properly. Did you say three days?"

"But wait. Where am I going to find that kind of money within three days?" Tina's heart was hammering. Three days was ridiculous. "Can't you give me a bit longer? Nothing in Gandama moves fast."

"I'm afraid that's not my problem. I simply need the money fast. You can find a loan broker to get you a different loan from someone else."

Yes, but who else would lend her the money? Gandama was doing badly enough. All the people who used to have successful businesses had left in the last few years. With all the unsavoury business and thuggery that was going on, the only business that was still close to making a profit was that of selling security equipment. And that business was hers.

Then he added, "There is another solution."