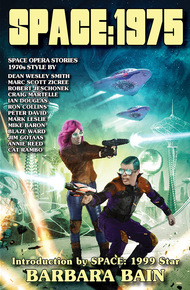 The 1970s are back! What better decade to inspire a new anthology of space opera stories than the one that gave birth to a certain epic set long ago, in a galaxy far, far away?

Every story in this book features the distinctive style of the 70s, transported to thrilling new worlds, fleets, and conflicts in the farthest and most exciting reaches of the universe. Groove to tales of cosmic heroes in bellbottoms and platform shoes…alien ships like glittering mirror balls…soundtracks of gritty soul, disco, and hard rock. You'll find everything from kung fu fighting to streetwise private dicks…all souped up with incredible ray gun/rocketship action brought to sizzling life by some of the most talented scifi scribes of today and tomorrow.

•Who can resist an anthology of scifi stories told with a 1970s twist? I couldn't, which is why I decided to edit this particular volume. To say I'm happy with the result would be the understatement of the century. With unique, 70s-style tales by such authors as Peter David, Marc Scott Zicree, Ian Douglas, Cat Rambo, and Dean Wesley Smith—not to mention an introduction by Barbara Bain, aka Dr. Helena Russell of the iconic 70s TV scifi series Space: 1999—this book became something truly special. The era of disco, glitter balls, leisure suits, and mood rings has never looked so out-of-this-world. – Robert Jeschonek

No sooner had Agent Lyssa Bonne Nuit darted through the hail of dial telephones and cheese whiz than her chrono-bike raced into a blizzard of Saturday Morning Cartoons.

Instantly, the lilac-skinned woman in the black carbon mesh jumpsuit was engulfed in churning waves of bright primary colors and limited animation. Images of snickering dogs, teenagers, and superheroes moved stiffly around her as she worked the bike's controls with all six hands, fighting to catch up with her quarry…and the treasure she'd chased halfway across the time-realm of When, all the way from the Everarium.

Suddenly, the giant image of a singing cartoon duck and rabbit appeared in front of Lyssa, jarring her attention…but she didn't slow down. The duck's orange bill seemed to swallow her whole as she squeezed the accelerator and bolted through it.

Zipping out the other side, she saw the burst of speed had been worth it. Pyre Ransom, the object of Lyssa's pursuit, was up ahead, hurtling through a rippling curtain of colorful characters—everything from cartoon bears to cavemen to cats and mice.

Pyre zoomed through it without ever looking back. The fugitive—a gold-skinned female android—was focused only on getting away with her prize: the decade dubbed the 1970s by the extinct species known as humanity.

Agent Lyssa was determined to take that prize away from her at any cost. Its containment cartridge was steadily leaking Saturday Morning Cartoons and other sociocultural flotsam from the 70s, causing havoc in the skies and streets of When.

One more burst of speed, and Lyssa tore through the last rippling curtain of cartoon characters in Pyre's wake. This time, she emerged in a storm of streakers—images of naked human beings sprinting through the silvery mist, body parts bouncing wildly with each loping step. Every one of them was grinning, an expression Lyssa had come to associate with human joy or pleasure…though she had never met a human and never would.

Because every human being had died out ages ago.

The human race lived on only as echoes in the Yesterplex of the Timekeepers—hyper-rez snapshots of life on ancient planet Earth captured at intervals throughout human history. These flawless log files recorded every detail of entire decades on compact cartridges like the one in Pyre's pack.

These decade backups—known as decalogs—were stored in the vaults of the Everarium, a repository considered impenetrable until Pyre's daring heist. Decalogs were priceless beyond all words, especially in the case of a species like humanity that no longer existed.

As the streakers bounded past with organs flopping, Lyssa fought to stay on track. She lost sight of Pyre up ahead because the gaggle was so dense—also because she was distracted by seeing so many life-size humans in one place. Over the years, Lyssa had studied humans at length and formed a special bond with their long-gone species. They had something in common, something she connected with on a very deep level.

As a final surge of virtual streakers poured past, meaty bodies jiggling, Lyssa saw she had a clear shot at Pyre, who was less than fifty meters away.

Yanking the Was-Gun from the holster strapped around her thorax, Lyssa pointed it at her golden target. Quickly taking aim, she squeezed the trigger, unleashing the weapon's payload.

The barrel of the gun disgorged a deadly Past-Blast—a roiling mass of temporal detritus sucked from multiple eras of a chosen species' history. As always, Lyssa's own sidearm was set to tap the past of humankind, the object of her greatest fascination.

The ejected mass hurtled through the mist, a cyclone of ancient Roman swords, World War II machine guns, furiously kick-stomping boots, and exploding Molotov cocktails. The mass was moving so fast, it looked as if it would consume Pyre's bike at any second.

Before that could happen, though, Pyre dove from its path and swooped away. The Past-Blast spun harmlessly off through the mist, its howling/booming/clanging growing fainter with each passing second.

Cursing, Lyssa dove after Pyre, pouring on as much speed as she could. Still staying out of reach, Pyre dropped into a bank of crimson clouds, kicking up bright red wisps in her wake.

Only when Lyssa plunged through those same clouds and burst out the other side did she realize where the thief was headed.

"Oh no." The violet antennae and feathery pink cilia on her head flickered madly. "She's heading for the Yesterplex!"