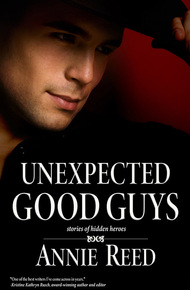 Quiet heroes. The ones who don't call attention to themselves.

The ones who make a difference. Who make life better for strangers they never met.

Or who avenge the innocents society can't or won't protect.

Exactly the kind of heroes this world needs. That's what you'll find in the seven stories in this collection by award-winning writer Annie Reed.

I love Annie Reed's work and have now for at least twenty years. Her stories always surprise me, sometimes shock me, often make me think. And her characters are wonderful to follow and be with, even in her darkest stories.

This collection of her stories focuses on the quiet heroes, the ones who don't call attention to themselves, but end up getting justice in one form or another for those they are helping. Check out her bio for a lot more about her and where to find her work. This is an author you want to follow closely. – Dean Wesley Smith

The gunshot snapped Burnett back to the here and now.

Instinct made him want to duck and cover. Ready his rifle and run for high ground.

But he was in Vegas, not Afghanistan. He'd left his rifle and his squad and parts of himself he could never get back thousands of miles away on the other side of the world. Random gunfire in the middle of the night here didn't mean someone was trying to blow his brains out.

He hadn't heard the whine of a bullet. The ping of a slug striking concrete.

The shot hadn't been meant for him.

Just a slice of modern life in a country in love with its guns.

He breathed in the hot night air and held it for a beat. Did it again and again until he felt his heartrate slow down.

At least some of his old sniper skills were good for something in civilian life.

The unrelenting desert heat had driven him out of his low-rent motel room an hour ago in search of a breeze. The motel's air conditioning had been out for the last week. Even at quarter to three in the morning, he'd felt like he was going to drown in bed in his own sweat.

You'd think the heat wouldn't bother him after Afghanistan. But since he'd been back in the States, he'd gotten used to the amenities of civilian life.

Not having to kill strangers on a daily basis.

The night clerk had looked up at him from a battered paperback when he'd walked past her window. She sat there behind bulletproof glass night after night waiting for late night check-ins.

Burnett had been a late-night check-in himself. No car, only a duffel full of stubborn dreams and a guitar he couldn't quite make himself get rid of.

She'd knocked on the glass to get his attention.

"Pretty late for a walk," she'd said through the window's tinny speaker.

Cigarette smoke had pooled around her head like an angry thundercloud. A half-empty bottle of Mountain Dew sat on the counter next to her along with an ashtray full of lipstick-stained butts.

Gloria had her vices well covered.

She'd introduced herself during his second week at the motel. Pretty woman. Smooth skin darker than his own. Curves in all the right places. Hints at a life lived hard in the lines at the corners of her eyes and mouth.

After his third week at the motel, she'd given him her cell number.

He didn't want to make her life any harder.

"Dangerous out there," she'd said. "Man like you alone at night in this neighborhood, get yourself killed."

He knew what she meant. Black man in a bad neighborhood full of gangs and drugs and boarded-up businesses.

He'd been through worse.

He thought about showing her his left hand.

He always shoved it in the pocket of his jeans. Kept it carefully out of sight. He'd had enough of people staring at it. Doctors poking at it. Giving him their sad diagnoses before suggesting rehab and retraining.

Dangerous had blown away half his hand and along with it, everything he'd mapped out for himself when he got back to the States.

He'd been humming that tune to himself, walking on Sahara toward The Strip, when he'd heard the gunshot.