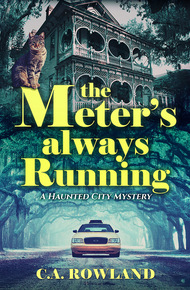 C.A. Rowland has always loved traveling and exploring new places, from neighborhood empty houses to foreign lands that draw her. Having lived in many of the states that make up the southeast, Savannah Georgia holds a special place in her heart. If you are visiting, keep a lookout since you might find her searching out new ghost stories to pull into her fiction or exploring the history.

Carolyn writes historical fiction, science fiction, fantasy, and The Haunted City paranormal mystery novel series. She comes by her interest in ghosts, myths, legends and the paranormal naturally, having spent hours in cemeteries with her grandmother as a child.

You can keep up with Ms. Rowland's upcoming novels, collections, short stories and travel adventures and her cat, Kayla, at www.carowland.com and www.ShadowDancePublishing.com.

Born and raised in Savannah, Georgia, taxi driver Trisha Reede knows all the haunts and legends of the city built on the dead. After a long day of ferrying tourists, Trisha ejects a late evening out of line fare. But when he's found murdered, she questions her decision to let him out in such a seedy neighborhood. As the police investigation steers her way, she puts on the gas to solve the crime. As if she didn't already have enough baggage to deal with, newly dead Aunt Harriett shows up, helpful but cryptic, more dreamlike than real, warning of an enraged spirit searching for Trisha.

C. A Rowland sent me The Meter's Always Running, a fantastic novel about a cab driver named Trisha Reede who gets mixed up in a murder. And because Carolyn writes the Haunted City paranormal mystery series, a ghost shows up to help. Well, maybe help. I found it a perfect book on getting justice and it fit perfectly in this bundle. Carolyn also writes a lot of historical fiction and science fiction as well as a lot of travel adventures. I would suggest following her because you never really know what wonderful book or story she will write next. – Dean Wesley Smith

A woman inviting a total stranger into her car might not be the smartest idea, but that was my job as a taxi driver. It sounded a bit crazy, I know.

I knew something about crazy. My aunt Harriett always said she could hear the whispers in the live oaks gracing the twenty-two squares within the Savannah downtown historic district. Sometimes the murmurs of the trees raised goose bumps on my arms, and I wondered what they were saying that my body understood but my mind couldn't yet comprehend.

I inched forward, now first in the taxi cab line at the Savannah/Hilton Head International Airport, glad to not be sitting in a desk in an office somewhere, even in the heat of early fall. And glad this was my final fare of the day. I could almost taste the wine spritzer I'd pour myself at home later tonight, sliding over my tongue and down my dry throat.

I preferred driving in the historic district across cobblestone streets filled with tourists enjoying the history of my city, both real and imagined. I could tell the fares great ghost and otherworldly stories involving the older homes, including my family's home. Today, I found myself outside this massive concrete island from which metal and glass grew, surrounded by asphalt roads and runways, waiting for tired travelers to emerge. I sat, wrapped within the idling purr of the SUV engine, cool air flowing out and around me, a contrast to the humidity outside, where jet fuel fumes mixed with vehicle exhaust.

Watching the doors for the crew.

The terminal door opened, and the flight crew from the DC shuttle to Savannah exited.

Traveler's Taxi was their preferred taxi service, and two of the five company cabs always picked up each flight crew. Secure, reliable fares.

I shut off the engine, climbed out to meet them, and immediately noted the new guy. A wiry pencil-thin guy whose strut screamed for someone to notice him. The uniformed women in the flight crew were pointing toward my SUV and sending him my way.

As he swaggered over, he stared intently at what I guessed was my figure, almost to the point of being offensive. I'd dealt with lots of different people, and I'd found the best way to deal with this was to ignore what was happening and just be nice. Sounded a bit cliché, but I didn't know what they'd had to deal with, so I did my best to make their day a bit easier.

"Can I help you with something?" I asked.

The man didn't even blink as his gaze rose to meet mine. "Not really." He moved toward the other cab again. Kinda rude, but whatever. Maybe the other driver would squeeze him in.

I got all kinds of looks from people, surprised I was a woman driver—from those who stared at the pink hair extensions for breast cancer month to mouth-dropping stares. This guy's look made my skin crawl, and I was glad he wouldn't be in my cab.