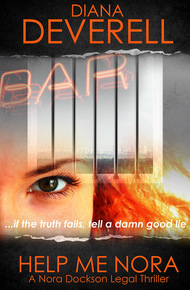 A native Oregonian, Diana Deverell was a US Foreign Service Officer and served in Washington DC, San Salvador, and Warsaw, before she moved to rural Denmark to write fulltime.

Her latest release is Lay Bare the Lie, the sixth book in the Nora Dockson legal thriller series, featuring a woman ex-con turned appeals lawyer. "Mercy Find Me", a story spun off the Nora Dockson series, was a finalist for the 2019 Derringer Award for short mystery fiction.

Diana debuted as a published writer in 1998 with 12 Drummers Drumming, her first international thriller. The latest thriller in the series is China Box. The four-book series spans seventeen years in the career of her heroine, State Department intelligence analyst Casey Collins.

Diana has also written the political thriller Bitch Out of Hell starring security pro Bella Hinton and told in Bella's own salty words. Bella is the heroine of "Payback is a Bitch," named by Otto Penzler as a distinguished mystery story of 2018. Before shining in stories of her own, Bella played a supporting role in several international thrillers taking place from the Cold War to the present.

Help Me Nora by Diana Deverell

Lawyer Nora Dockson swore to tell the truth. But will she stick to her oath when only deception can save her innocent client?

An ex-con, Nora pulled herself out of the gutter and became an appeals attorney. She works only for convicted felons, rescuing innocents trapped by the flawed process that put them behind bars.

For seven years, she's tried to convince the court that her client didn't kill the victim. She failed again today.

She thinks the real murderer died five years ago. Truth is powerful. How difficult can it be to dig it out?

Native Oregonian, Diana Deverell now lives in Denmark and writes full time. Mostly she writes thrillers of various kinds, from international thrillers to legal thrillers and a lot between. I was really happy to get Help Me Nora for this bundle, which is the first book of her bestselling Nora Dockson series of legal thrillers. No way better to get justice for someone than have an ex-con turned lawyer represent you. Help Me Nora will keep you reading to the last page and then scrambling to get the next five books in the series. – Dean Wesley Smith

Nora hadn't cried over a judge's decision since she was eighteen years old.

She hadn't wept in court today when the judge sent Gus back to Washington State Penitentiary with a new date for lethal injection.

But hours later, when she entered Channing Palmer's Spokane townhouse and her best friend wrapped her in a consoling hug, the sympathy ambushed her.

She couldn't choke back her tears.

"Gutless shithead," was what she tried to respond, but the words came out garbled.

From the back of the house came the sleigh bell sound of ice tinkling against crystal and high-spirited laughter. The stereo blared "Frosty the Snowman".

Channing's great room had to be jammed with colleagues from the Legal Resource Center and friends from the public defense offices—all bubbly with holiday booze and idealism. Revering The Law as though it were a sacred totem.

She pulled free from Channing's embrace, hunched her shoulders, and headed up the staircase. She smelled the piney scent from evergreens draping the bannister.

She heard Channing call to her husband Clayton, putting him in charge of answering the door. The light tap of footsteps behind her on the uncarpeted stairs told her Channing was following.

Nora dropped her parka on the master bedroom floor and collapsed on the canopied double bed.

"I wasn't expecting you," Channing said, sinking onto the quilted coverlet. "Not after what happened in Hammond County this afternoon."

"Don't worry," Nora murmured. "I won't go down and spoil the holiday mood."

She sat up, grabbed a tissue from the box on the bedside table, blew her nose. She raised both hands to push ginger curls off her forehead.

"I'm not looking for someone to cheer me up. This setback means I have to concentrate on Gus. I don't have time for anything else. I need to let Quinn know."

Channing plucked a pack of cigarillos from where they nestled next to the bedside ashtray.

"I talked to him right after you called," Channing said. "He wants me to drop everything I'm doing and rewrite the brief you drafted for Gus."

"Of course it has to be revised," Nora stuffed down her irritation. She was pissed at Quinn, not her friend. She could write a decent brief.

She fumbled in her purse for her own cigarettes and lighter and lit both their smokes. "I know Gus's case better than you. I'll do it."

Dark hair fanned out across his shoulders. He stepped into the room, sniff-testing the air—the reformed pack-a-day man getting a secondhand fix.

"They told me I'd find you two up here," Quinn said. "Nora, I need you digging into the Jared Nelson files full-time."

She was off the bed and on her feet.

"I'm not pulling you off his case," he said. "But I have to keep you as co-counsel for Jared. Channing will fix your brief. She breezes through the constitutional issues faster than anyone else at the Center."

"Gus's case is at a critical point." Nora hardened her voice. "I need to move fast and hit hard. I can't live with myself if I drop him now."

"But now is when I need you." Quinn paused and when he resumed, any trace of pleading was gone from his tone. "You saying you can abandon Jared and live with yourself?"

"I made a good start reviewing the evidence in his case. Let me concentrate on Gus for two more weeks. I know I can find a way to beef up my arguments."

"Sorry," Quinn shot back. "Jared's deadline is only sixteen days away. You have to find me something I can use."

She tried once more.

"Nobody I need to talk to for Jared will be available over the holidays. I can't do any serious investigating until after New Year's. At least give me till then to come up with a new angle for Gus. As his lawyer, I owe him that."

Quinn's eyes narrowed as though reckoning her height.

She straightened her backbone, standing her tallest. Determined to measure up.

Channing was standing, too, her gaze flickering between them.

"Until New Year's. After that, you're on Jared only. And whatever you do for Gus better not have blowback. We don't have enough manpower as it is. I can't afford to lose any funding."

She widened her eyes.

"I'm at war on behalf of the wrongfully condemned. So—I'm not supposed to piss anybody off?"

"Don't piss me off," he growled and turned toward the door.

"Merry Christmas," she called in the direction of his back.

He grunted acknowledgement and disappeared down the stairs.

She lifted her clenched fist in a victory salute.

Channing pulled it down.

"Not your smartest move," she told her. "You'll be working through the holiday. You said you were going to spend Christmas with your grandmother."

"If I get right to work, maybe I still can."

Nora reached for her purse and pulled out her cell while explaining.

"I've been playing phone tag all week with a cop. He mentioned me to a couple of people. Said he's got the inside dope on one of my clients. He could mean Gus. Maybe I can catch him tonight. Name's Harper."

"A State Trooper? Kent Harper?" Channing made the same face she did when she smelled milk gone sour. "I know him. A hundred percent cop. Hates us. He'll screw a defense lawyer any way he can."

"I'd meet with the devil if he'd help me get Gus out."