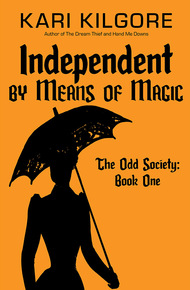 Kari Kilgore's wanderlust and imagination lead her all over the world on grand adventures, especially to locations vibrant with clues about life, love, and challenges in the past. Her heart and family bring her home to her native Appalachian Mountains of Virginia. From that solid base, she and her husband Jason A. Adams bring those adventures to life in fiction.

Kari writes mystery, fantasy, science fiction, romance, and contemporary fiction, and she's happiest when she surprises herself. She lives at the end of a long dirt road in the middle of the woods with Jason, various house critters, and wildlife they're better off not knowing more about.

Independent by Means of Magic by Kari Kilgore

Victoria Haversham leads a life of privilege. A luxurious home. Beautiful gowns and jewelry. Even a fine education.

But her father's single-minded determination to marry her off transforms Victoria's pleasant life into torment. He never suspects Victoria means to create her own future.

Police Inspector Rob McDuff patrols London with a keen mind and a heavy burden. Caught in never ending routine in a city full of crime.

Then he discovers a misdeed unexplainable by normal methods. An investigation that leads him to Victoria's door.

Will McDuff seal Victoria's fate? Or will their collision create a new destiny for them both?

The Odd Society: Book One

Kari Kigore might be one of the most diverse writers of different genres I know (outside of myself and my wife Kristine Kathryn Rusch.) Kari just writes what she wants, no matter the genre, and thus reading her work is always fun.

When I asked about Getting Justice, she surprised me by saying she did have a novel set in Victorian times, a fantasy novel with a police inspector and a very stubborn woman of her times. Turns out it was perfect for this bundle about getting justice. And a fantastic read as well. – Dean Wesley Smith

Some plans are best laid in secret “There may be no good time for such things,” Victoria’s father said. “I’m afraid I have terrible news, Victoria. It’s about your wedding.” “What’s happened, Father? I do hope Wilfred is well.” “My dear, that word can have many meanings,” he said, his mouth and eyebrows deepening into a scowl that lifted Victoria’s heart. “He is well finished with polite society. That means he’s well finished with any daughter of mine.” “Is there no hope?” her mother said, tears standing in her eyes. “No salvation?” “None. An inspector will likely be round to ask whether we have anything to contribute to the investigation. I told him we had no secrets of Mr. Abernathy’s or our own to keep. I am sorry, Victoria. Other suitable arrangements will be made, I can assure you of that.” “Yes, Father,” Victoria said, her voice and face reflecting her mother’s heartbreak perfectly. “I’ll speak to the inspector if it will help. I trust it will all work out for the best in the end.” Victoria stood, holding her napkin to her face, and walked quickly out of the room. “Shouldn’t have let him barter me off to the highest bidder, Mother,” she said under her breath. “And you should never have let him bring us back to this awful place.” Connections his mind can’t ignore Another harried young man showed McDuff into Mr. Winston’s office, promising a short wait and apologizing profusely. McDuff had the clear impression the man, barely more than a boy, had been apologizing for his boss all day long. Before anyone else walked in, and before McDuff finished his customary glance around any new space, he froze. Sitting on top of a wooden file cabinet were two clockwork pink flamingos. Nothing else like that was in the entire office. No trace of a toy or anything even as frivolous as a book that didn’t focus on ocean navigation or ship engineering. McDuff rubbed his temples with his thumb and fingers, trying to catch the images flashing through his mind. Every one. Every single one of the strange interviews, the ones that kept him on edge. Each office or sitting room—or bedroom for the girl this all started with—held one of those ridiculous toys. Just like the close associations with Mr. Haversham, this didn’t make the slightest bit of sense. And just like that, once McDuff saw the pattern, he could not un-see it. He was sorely tempted to get up and walk out. He knew exactly how this interview would go. The confused, blank stares, the round-about answers, the failed attempt to hide how little the subject did know. He hated to sit through that again, but trying to work out a reason why he’d disappeared would be challenging at best. While the impressively tall and excitable Mr. Winston talked—just as uselessly and indeed Caribbean-obsessed as expected—McDuff pretended to take notes. He was really drawing in his notebook, two large circles with names in the middle of each. Haversham. Abernathy. He wrote in the names of all the strange interviews, the ones like this one that simply did not make sense, inside the circle they were most closely associated with. Every single one fit into one circle. Haversham.