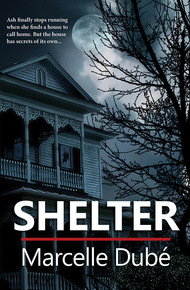 Marcelle is the winner of the 2021 Crime Writers of Canada Award of Excellence for her short story, "Cold Wave," in the Sisters in Crime Canada West anthology, Crime Wave.

After six long months on the run from her abusive husband, Ash Gantry finally finds a place to call home in Albans, Ontario. It doesn't take long for her to fall for the small town with the big heart. But more than the town itself, more than its inhabitants, it's the house on Hawk Street she falls in love with.

But while her heart wants to stay, her head tells her to keep moving. If she keeps moving, her husband will never find her. Only, she's tired of hiding. Tired of running. Tired of being afraid.

Then she discovers that her new home hides a dark secret, one even more dangerous than the man hunting for her. By the time he finds her, she may already be dead…

Marcelle Dube won the 2021Crime Writers of Canada Award of Excellence for her short story, "Cold Wave." She writes numbers of different mystery series as well, so she knows about writing about getting justice.

In this novel full of extreme tension and a fantastic setting, Marcelle gives us Ashe Gantry, a woman on the run from an abusive husband. And when Ashe decides to stop running, the tension really, really mounts. An amazing read. – Dean Wesley Smith

They automatically hugged, then Jake stepped back. "What's going on?"

Maddie sighed. She was heartily sick of this house, too, but Frank Boudreaux paid Albans Realty a tidy little retainer to manage it and until she and Dave decided they no longer wanted that nice check every month, they were bloody well going to manage the damned place.

Or, at least, she was, seeing as Dave couldn't bring himself to come near it.

"I was showing the place this morning, and my prospective client saw someone in the house."

The wind picked up, swirling the leaves on the lawn and sneaking up the back of Jake's jacket. He controlled a shiver.

"Did you see anyone?"

He didn't realize until he followed Maddie's gaze that his hand had strayed to his holster.

Maddie's eyebrow rose. "No. I was just getting here and my client was already on the porch, looking in through the window." She nodded toward the door behind her. "We searched the house—even the cellar—but didn't find anything."

It was Jake's turn to raise his eyebrows. "You searched the place?" Jesus. "Maddie, what if there'd been someone in there? Why didn't you call me right away?"

She shrugged. "I'm sure it was just a trick of the light. She probably just saw a reflection of herself and panicked. She's pretty young."

Jake's gaze strayed past Maddie to the window in the door. He could see the sky reflected in it, and clouds moving past, and the tops of the trees in the front yard. He had seen pictures of the place from when it had been a real farmhouse, on a real farm. It still had the same bones, and the porch could have been plucked straight out of the picture, but just about everything else had been modernized.

He wondered how many people had lived in this place over the decades. He knew for a fact that in the last seven years, at least a dozen people had tried living there, only to leave within weeks.

Maddie placed a hand on his arm. "I've already walked through it," she said gently. "There's no one there."

Maddie smiled sympathetically and moved aside. He opened the door and stepped in, taking a deep breath. The place smelled faintly of Maddie's perfume, something flowery and citrusy at the same time. He closed the door behind him and turned into the sitting room, trying to ignore the sudden feeling of oppression that came over him. It was always this way in this house. As if he was entering a prison.

He moved quickly through the main floor, making sure the French doors in the dining room were locked, then upstairs, making sure to check under the beds and in the closets. Nothing.

When he came back downstairs, he headed for the kitchen again, remembering the cellar. Only once he pulled the trap door up and got hit in the face with the musty, earthy smell did he remember that he'd left his flashlight in the car.

He stared down at the dark hole, his mind completely blank. He didn't do so well in small dark places. Then he sighed and climbed down to the packed earth floor. He had to duck his head to keep from hitting the rafters, but he worried more about the ducts. He'd been down here before and knew roughly where the light bulb was, but not often enough to have memorized the location of the ducts.

He moved away from the light spilling down from the laundry room and stretched his hand out before him and a little above, sweeping it back and forth to catch the string hanging from the lightbulb.

A breath of movement and something cool caressed his cheek. He yelped and jumped, and something brushed his hair. He batted the air above his head and suddenly his hand hit the string.

The light bulb. Thank God. He swept the air, trying to find it again, and encountered nothing but cobwebs.

Then the trap door fell with a loud thump, trapping him in complete darkness.

Something brushed his cheek again and he reached up, grabbed the string, and pulled. Weak light flooded the cellar. He looked around. No one.

He hated this house.