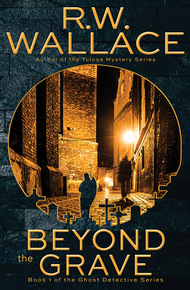 R.W. Wallace writes in most genres, though she tends to end up in mystery more often than not. Dead bodies keep popping up all over the place whenever she sits down in front of her keyboard.

The stories mostly take place in Norway or France; the country she was born in and the one that has been her home for two decades. Don't ask her why she writes in English – she won't have a sensible answer for you.

Beyond the Grave by R.W. Wallace

The forever rebellious Clothilde's gravestone only mentions her first name and date of death. A small bump in the ground next to her grave marks former police officer Robert's last resting place.

And in thirty years, no visitors for either of them.

Confined within the cemetery borders and yearning for closure to move on, the two ghosts can't go after the people who killed them.

Until Clothilde receives her very first visitor — and along with it, the means to escape the cemetery.

Beyond the Grave is the first novel in the Ghost Detective series, following Robert and Clothilde in their search for justice.

I am publishing in Pulphouse Fiction Magazine a series of stories from R.W. Wallace about a ghost detective helping other ghosts get justice. This ghost manages to solve these cases without ever leaving the cemetery. So when I heard she had just published a novel about this ghost detective, I wanted it for this bundle. Getting justice has many different meanings when it is one ghost helping another. I am sure that once you read this fantastic book, you will follow R.W. Wallace to find more. – Dean Wesley Smith

Ghosts are nothing but people who died with unfinished business. Once the business is dealt with, they move on to the afterlife.

Ghosts are also bound to the cemetery they are buried in, unable to escape their confines. Which means that unless the person associated with the unfinished business shows up in the cemetery, the business stays unfinished.

Even when the person does show up in the cemetery, there's no guarantee we can accomplish our mission. Our interactions with the world of the living are severely limited—although not non-existent—and we often have to get creative.

For the most part, we manage.

My friend Clothilde and I have haunted this cemetery for over thirty years and we've helped countless ghosts move on to the afterlife. Murders have been solved, spouses have been forgiven, family secrets have been unearthed. It's become our mission in death to help others move on.

And yet, the two of us remain.

Our graves are close to the squeaking back gate of the small cemetery, with the gray stone wall outlining our field of action at our backs, the small stone church with its bronze spire and large wooden doors at the far end of the cemetery straight ahead, and gray tombstones and mausoleums covering the rest of the area. Some graves are simple and understated like Clothilde's, some are more like palaces with columns and spires and crying angels, while yet others used to be grand but have long since fallen into disrepair and barely show the name of the person who was buried there decades or centuries ago.

There's a certain ebb and flow to the life in a cemetery.

Some days, especially in winter, we won't get a single visitor. The church doors stay closed, the back gate remains silent, and the small parking lot stays empty. When the gray clouds of a southern French winter lay so low we can barely see the top of the church spire, the sounds become muffled, making us wonder if the world of the living is still out there, and water clings to the dark granite of the tombs and runs down the faces of the sculpted angels, letting them shed real tears.

When the sun bears down on us the hardest in summer, the elderly visitors wisely stay away. There's some shade under the plane trees lining the main path or under the large cedar tree, but mostly, the graves absorb the sunlight and send it back to our visitors ten-fold, making a visit to our cemetery a stifling experience. If there's any wind, it's blocked by the wall or the larger mausoleums. Only the most desperate will show up on a day like that.

Other than the obvious crowd for the Day of the Dead in November, we get the most visitors in spring. The temperature is in the agreeable twenties, the sun makes a first appearance after months of hiding behind clouds, and nature is waking up and reminding people that they are alive.

This quite often translates into thinking about the dead, and wanting to bring some life to the graves of their loved ones. So, in addition to all the flowers growing naturally in our cemetery, graves receive roses and daffodils, lilies and tulips. Our cemetery becomes the canvas for the most colorful of flower arrangements.

No flowers have ever graced my grave, or that of Clothilde, because in thirty years, we haven't had a single visitor.

In my case, this makes sense. After all, the only thing marking my grave is a slight bump in the ground next to Clothilde's tombstone, which shows how much—or rather how little—anybody cared about my demise.

I can't say I blame them. The reason I'm still here as a ghost thirty years after my death, after all, is because I have sins to atone for before I can move on to the afterlife. I was a lousy police officer, a lousy brother, and a terrible son.

I wouldn't want to honor my memory, either.

I made my peace with the status quo a long time ago, in large part because I've found a way to work toward a possible redemption. If I solve enough crimes, help enough ghosts, perhaps I can make up for the crimes I didn't solve while I was alive, the people I didn't help.

For Clothilde, the fact that she hasn't had a single visitor makes a lot less sense.

She arrived as a ghost in this cemetery in the late eighties, a few short weeks before my own death, and has hung around here ever since, being my friend but sharing little to nothing about her past. She was twenty years old when she died and will forever be the rebellious teenager. She's moody, mistrustful, and has a terrifically dry sense of humor. She loves perching on tombstones, with her hands under her jeans-clad thighs, and her Converse-covered feet swinging through the stone, completely ignoring the rules of the physical realm.

Her gravestone only has her name and her date of death. No date of birth. No last name.

And yet, every five years or so, a gardener comes to clean the tombstone, removing moss and weeds and repainting the gold of the engraved letters if needed.

I tried asking Clothilde if she knew who paid for this service, but she never answered.

I don't think she knows, either.

Although I guess it would make sense that it was her uncle, who apparently was the one to pay for and arrange her funeral. Not that the man has ever set foot in our cemetery.

Her mother certainly didn't have anything to do with her daughter's final resting place. She came through here as a ghost a few months ago, and was surprised to discover her daughter was in the same cemetery.