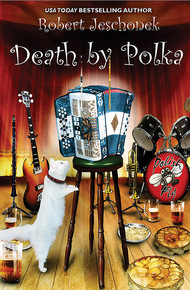 Robert Jeschonek is an envelope-pushing, USA Today-bestselling author whose fiction, comics, and non-fiction have been published around the world. His stories have appeared in Black Cat Mystery Magazine, Pulphouse, Pulp Literature, and other publications. His crime tale, "The Messiah Business," appeared in Fiction River: Risk Takers and was named an honorable mention in Year's Best Crime and Mystery Stories 2016. His novels have won the International Book Award, the Forward National Literature Award, and the Scribe Award.

Death by Polka by Robert Jeschonek

Who killed Polish Lou, the famous Prince of Polka Music? His daughter, musicologist Lottie Kachowski, comes home to the polka heartland of Johnstown, Pennsylvania, to find the answer. Lottie has an unbeatable talent for using music to solve crimes, and she does just that on the trail of her father's killer. But the stakes turn deadlier than ever when another polka legend comes to a tragic end. As the danger rises, Lottie recruits her father's wacky girlfriend, Polish Peg, to help her dig deeper into the wild world of small-town polka. The investigation takes some fancy footwork, as Lottie dances her way through a maze of local rivalries and alliances to unearth the darkest secrets of friends and neighbors. At the same time, she fights to keep from getting dragged back into the polka scene she left behind long ago, though her father's will names her his successor as head of his polka empire. Ducking her legacy while catching a killer is the challenge of a lifetime, but with help from Polish Peg, an old boyfriend, and a mysterious cat called Ghost, Lottie might just stand a chance of cracking the case. Because when you've got polka in your blood, you just know the bad guy's going to face the music.

I am a major fan of Robert Jeschonek and his ability to take an idea or a concept that no one has thought of and make it not only his own, but original and a great read. So when I started to put this Storybundle on Getting Justice together, I asked Robert if he had a book that fit what I was looking for and he said he did and sent me DEATH BY POLKA.

Perfect. Just perfect. And I knew that no one else would send me a book where justice came about because of polka music. I was right. – Dean Wesley Smith

My father had been in the ground only two hours, and people were already dancing.

As I stood outside the door of the Fire Department banquet hall in the West End of Johnstown, Pennsylvania, I could hear the polka music flowing from within. No music was better loved in this part of town where Polish heritage came before all others.

Not that I could claim to be one of the polka faithful. Not after fifteen years in Los Angeles.

I certainly didn't look like a polka chick. Sizing up my reflection in the glass door, I straightened my simple knee-length black dress and adjusted the stylish coil of black hair wound on top of my head. If the coil came undone, my hair would fall below the small of my back...which is quite a ways, as I'm over six feet tall.

Satisfied that I was halfway presentable, I reached for the door handle. When I pulled the door open, a wave of polka music washed over me, punctuated by whooping and yipping. As I stepped inside and took off my sunglasses, I could see the hall was packed from corner to corner. Everyone was dancing, singing, drinking, laughing, or some combination of all the above.

The clothes were about the only giveaway that most everyone had been at my dad's funeral two hours before. Lots of folks were wearing black; some of the women still wore black hats and veils. But some of the dancers spinning around the middle of the hall had actually changed into full polka regalia since the funeral. I counted six middle-aged women in brightly colored skirts that lifted as they twirled across the concrete floor.

I stood at the edge of the mayhem for a while, feeling lost. I knew this was exactly what Dad had wanted, what he'd asked for in his will. They didn't call him "Polish Lou" Kachowski, Prince of Pennsylvania Polka, for nothing.

So why did the whole scene make me feel sick? Like it was disrespectful to be dancing instead of crying? Like none of those partiers deserved to be there?

Or was it me who didn't deserve to be there?

"Lottie?" The sound of a familiar male voice made me turn. I found myself staring at Stush Dudek, a gentle giant with a flyaway gray comb-over and the saddest brown eyes I've ever seen. "I'm so sorry about your father, hon."

As family friends go, Stush was one of the oldest and best. Just his being there made me feel instantly better. "Me, too, Uncle Stush." That's what I called him, though we weren't related. "I still can't believe he's gone."

Stush wagged his big head slowly. He always reminded me of a big Saint Bernard. "It's a terrible thing, Lottie. None of us can believe it."

Suddenly, I felt tears burning my eyes, and I looked away. Focused on the polka band on the stage at the opposite end of the fire hall. It so happened an old boyfriend of mine was playing an accordion solo just then.

His name was Eddie Kubiak, Jr. I hadn't seen him in at least fifteen years. Not since I'd moved to Los Angeles.

He still looked about the same except for the fine-lined sideburns, mustache, and goatee tracing the narrow face below his spiky black crewcut. He still played a hell of a solo on the button box, too.

"At least he went peacefully." Stush gave my shoulder a squeeze with his enormous hand. His dark brown eyes gazed intently into my own. "God bless ya, hon. You know you can lean on me, don't ya?"

Just as he let go of my shoulder, the band finished its song. A deep, gravelly voice boomed over the P.A. system.

It was a voice I remembered well. "Everyone! Everyone!" It belonged to the band's leader, Eddie Kubiak, Senior. He was Polish Lou's biggest rival...and Eddie Jr.'s dad, of course. "Time for a toast! Another toast in honor of the great Polish Lou!"

All around the fire hall, red plastic cups and clear plastic shot glasses were raised overhead. Everyone in the band found a drink and raised it, too.

"To a true friend of all Johnstown!" Eddie Sr. lifted a vodka bottle over his glittering red accordion. His pudgy face was almost as red underneath his slicked-back mane of silver hair. "To a true Polish falcon! A true angel of the polka way of life!"

Everyone cheered and downed their drinks.

Eddie Sr. took a long swig from the vodka bottle and shook it like a spear. "He will be missed! Będzie można ominąć!"

How many people were in the fire hall that afternoon? Three hundred? Five hundred? And every last one of them cheered as loud as they could. Cheered so loud it hurt my ears.

I guess I should've grabbed a drink and joined the toast, but I couldn't bring myself to do it. Because the whole party atmosphere left me cold.

And maybe because I couldn't bear to admit my dad was really gone.

Instead of throwing back a shot or a swallow of beer, I turned and headed for the door. I rushed outside into the late June heat, tears streaming down my cheeks.

While behind me, the band started playing "The Beer Barrel Polka."