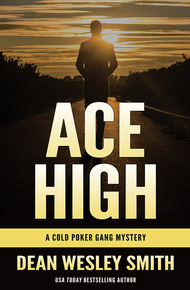 1991. The famous Las Vegas hotel The Landmark scheduled for destruction. A girl's body found in one of the old rooms. Impossible to even tell her identity or what happened to her.

Seventeen years later Cold Poker Gang members Pickett and Sarge take up the girl's long-cold case. And layer by layer they uncover one of the most twisted crimes in the history of the famous sin city.

A crime that still needs to be covered up with even more death.

Ace High wins the award for the most twisted crime novel yet in the series of Cold Poker Gang novels. If you love great mystery books, grab this one.

I put one of my own acclaimed Cold Poker Gang novels in the mix. All eleven of the series books stand alone and feature retired Las Vegas detectives solving cold cases. And getting justice for the victims of the cold cases is the major focus of every book. So I figured I would add it since it really fits. – Dean Wesley Smith

1991. The famous Las Vegas hotel The Landmark scheduled for destruction. A girl's body found in one of the old rooms. Impossible to even tell her identity or what happened to her.

Seventeen years later Cold Poker Gang members Pickett and Sarge take up the girl's long-cold case. And layer by layer they uncover one of the most twisted crimes in the history of the famous sin city.

A crime that still needs to be covered up with even more death.

Ace High wins the award for the most twisted crime novel yet in the series of Cold Poker Gang novels. If you love great mystery books, grab this one.

The Landmark Hotel, or as it was called before it was closed, the New Landmark Hotel, felt more like an ancient ruin to Steven Bell. And as a long-time resident of Las Vegas, that made him sad. In its glory, the hotel and casino had really been something to see, towering proud and gleaming over the valley. Now it desperately needed paint, the windows hadn't been washed in years, and weathered plywood covered all the entrances. It just looked worn out and tired as only a well-used and not-maintained building could look in the desert winds and heat.

Sad, just flat sad, that a building of such importance to an entire city had been left to rot.

He just hoped someone with a lot of money would come in and bring the Landmark back up to use. Maybe not as a hotel, but as offices and restaurants or a something.

But after seeing the inside of the place, he was starting to doubt if that would ever be possible no matter the amount of money.

The Landmark had been designed to imitate the Space Needle in Seattle, thirty stories of tower with restaurants and a show ballroom with a huge dance floor at the top. For the longest time it had been the tallest building in the valley.

Most of the rooms and suites were in the buildings around the casino area on the ground floors, but some suites lined the sides of the tower all the way to the top.

Construction on the place had started in the early sixties, but it wasn't until Howard Hughes bought the Landmark that it opened in 1969. The hotel and casino went through numbers of owners after that, never really getting profitable until finally closing in August of 1990.

Clearly to Steven, no money had been spent at all to keep the place up in the last few years of its existence. Everything just looked worn or broken. The last guests before this place closed must have been disgusted at what they found. He would have been.

Now everything inside was to be liquidated and it was Steven and his crew's job to do an inventory. At first, when the court had hired him, he thought the job sad, but that thought vanished the moment he started through the place.

Old blackjack and craps tables and such in the casino area might be worth something, but the casino had leased all its slots and those were long gone already. He and his crew of four found the beds in rooms were often rotted and the mattresses bug-infested. The wooden end tables and coffee tables in most rooms were worn and scarred. Lamps and their shades often were spotted with age or just broken.

All of the bar equipment was so dated as to be almost antique. And food had been left in the fridges and the pantries to rot when the place shuttered. If this place had sat like this in any other town but Vegas, the entire building would have been overrun by rats by now. As it was, he only saw some minor signs of mice. But who knew what was living in the walls.

He and the four people working for him had focused on the ground floor and casino area for the first few days. Now they were working their way up the tower slowly, leaving all the restaurant equipment and furniture in the top floors for last.

The afternoon of April 3rd was getting warm outside and the inside of the hotel was getting stuffy. He had already shed his outer shirt at lunch and was now in just a T-shirt and jeans. He had a work belt on his waist with most tools he would need including extra pens.

They had started at sunrise to avoid this kind of heat problem and in an hour they would call it a day. He couldn't even begin to imagine what this place would feel like without power and air conditioning in the summer. It would be like walking through an oven.

He was looking forward to getting home to his condo and showering off the smell of mold and rot.

He had climbed ahead of his crew to the twentieth floor, just doing a quick walk around the hall, making sure all doors were open as they should be.

Just as with every other floor, the carpet in the hallway was worn and everything smelled like it had been closed up far, far too long. The beam of his flashlight cut through the darkness of the hallway, with light coming in from the open suite doors to help some.

He stirred up a fine cloud of dust as he moved and the dust floated in the beam of his light. He desperately wanted to go throw open a few of the windows in the suites to get some fresh air in the place, but then they would just have to close them. Wasn't worth the effort to even try to pry open rusted and old windows.

Ahead of him the hallway was even darker because the door to Suite 2017 was closed. He moved to open it, but it was locked. He tried the pass-key, but that didn't work either. More than likely the door was jammed shut.

"Munro, bring the crowbars," Steven said into his radio. "Got a stuck door on twenty."

Steven moved on around the rest of the suite hallway, making sure all other doors were open. They were. So far, he and his crew had been forced to pry open or break open about thirty doors. He was just happy it wasn't a lot more. These old casino doors were solid.

Munro met Steven at the closed door and handed him a large crowbar. Munro was the largest man on the crew. Young, and with a wife and two kids, he never missed a day and was the hardest worker Steven had ever met.

Steven also knew Munro worked out at a local gym every day after work and had muscles on top of muscles. But when it came to heavy lifting and forcing a closed door, Munro was the best.

The two of them quickly had the trim off the door and with both bars jammed between the frame and the door, they managed to shove the door inward.

"Shit," Munro said, stepping back as a wave of dry, rotted-smelling air hit them. "What the hell is that?"

Both of them moved back along the hallway and away from the smell. Steven knew exactly what that smell was. Something had died in that room. He knew the smell of death from his days on search and rescue for the county. And it wasn't the smell of fresh death, but old death.

Steven took out a mask from his tool belt and handed an extra to Munro. "Let me take a look first, decide what we need to do."

Munro nodded. Even in the pale light of the hallway, Steven could see that Munro's face was white. He clearly had never dealt with anything dead before.

With masks on, they went back to the now-open door.

Steven took two steps inside and stopped. Munro stopped right beside him, looking over his shoulder.

It was clear what had caused the smell.

On the bed was a naked woman.

"Shit," Munro said and turned away, going back into the hall to throw up what he had had for lunch.

The mummified body still looked very human in the daylight pouring in through the window. She had long brown hair spread out around her head and she looked peaceful, with her hands crossed over her chest as if someone had placed her there, looking up at the ceiling, legs together. She had been young and thin.

And she had clearly been dead for some time.

In fact, she looked very peaceful.

He backed out of the room, making sure to not touch anything.

Munro was leaning against a wall, trying to catch his breath. The hallway now smelled of old death and Munro's former lunch.

Steven said into his radio to his crew. "Mark clearly where you left off and everyone meet at the truck at once. Don't depend on remembering where you were. We're done for the day."

More than likely they were done for the week. Crime scenes tended to do that to jobs.

Steven then patted Munro on the shoulder and the two of them headed for the staircase.

The hotel had gotten even sadder now. Its last resident was a young dead woman.