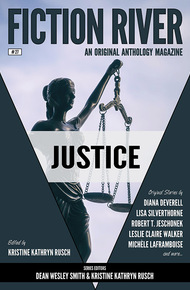 Justice comes in many forms. And the wide variety of stories presented in this latest volume of Fiction River make that case. Of the fifteen powerful stories in this volume, some will twist your heart, others will pound you in the gut, and still others will make you feel like the world has meaning. From a man avenging a wrongful conviction, to heroic women fighting to reclaim their homeland, to kids trying to find justice in the chaotic world of adults, this volume will prove one you won't soon forget.

Table of Contents
"The Ball Breaker's Summer Club" by Valerie Brook
"Grace" by Michael Kowal
"Pariah" by Louisa Swann
"Spoils" by Eric Kent Edstrom
"The Night Takes You" by Leslie Claire Walker
"My Honor to Kill You" by Dan C. Duval
"A Pearl into Darkness" by Lisa Silverthorne
"Mercy Find Me" by Diana Deverell
"Best Served…Salted" by Lauryn Christopher
"Domus Justice" by Michèle Laframboise
"Uncle Philbert" by Dory Crowe
"Bone" by T. Thorne Coyle
"A Vulture Waits" by Rob Vagle
"The Supporters in Panama City" by Brigid Collins
"The Darks of Their Eyes" by Robert T. Jeschonek

15 fantastic short stories by 15 of mystery's top writers. I figured by adding this in, I covered a lot of different ways of getting justice the other writers in the bundle missed. A very powerful anthology. – Dean Wesley Smith

You still need to articulate that theme, though. And when you articulate it, you get an idea of what you want to see in the anthology and what you don't want.

If you're an experienced editor, you know you'll get one or two stories that will completely take you aback, and maybe make you reconsider the entire theme. In the past, I've tailored anthologies around just those kinds of stories—pulling a story from one anthology and using that story to anchor another.

Once you have your list of stories, you have to assemble the volume. That sounds so very easy, but it's not. Because there are a bunch of things to keep in mind.

First, readers read differently. Some readers start with the stories by their favorite authors. Other readers thumb through the volume and see if some story catches them. Many readers read from beginning to end as if the anthology were a novel, occasionally skipping a story that doesn't hold them.

As an editor, you have to keep all of those readers in mind. You can't really edit for the favorite-author readers. They're on their own. The thumb-through people need good titles to hook them, or a great first line, or maybe something in the story's introduction.

The readers who read from beginning to end provide the biggest challenge. Because you can't scare them away with the first story. You can't have stories with the same level of gut-punch back to back to back. Readers need to breathe, and if every story hits them in the chest, they'll take that breath by setting the volume down.

You don't want your readers to set the book down. You want them to go from story to story. So you need the occasional palate cleanser in the volume, something that eases the reader from a gut-punch to a smile and then back again.

But that first story, wow. It's hard to pick. It needs to be one of the most memorable stories in the volume. It also needs to be representative of what's to come. And yet, it can't punch too hard, because if it does, readers will quit even if they love the story.

Then you have to ebb and flow the subgenres, the expected and the unexpected, the light and the dark, making sure the tone varies, the type of story varies, and the emotional load is anything but steady.

Somewhere in the middle, you insert a gut-punch story, so that the reader gets hooked all over again.

The second half of the volume does the same work as the first half, except that the second half is building toward the emotional climax of the book.

If the first story gets you to read the volume, the last story makes you remember what the volume is about (and maybe, in the case of series anthologies like Fiction River, makes you buy the next anthology). So I always save the most memorable story for last.

Usually I can assemble a volume of Fiction River in fifteen minutes once I have the stories. The stories suggest their order from the moment I group them together. I put together the table of contents. Maybe I have to decide if Story X goes before Story Q or vice versa, but that's about it.

I finally called in Dean for help, in his capacity as series editor. He and I stood in our kitchen, moving manuscripts around, discussing those considerations that I mentioned above. And he kept saying, "You have too many spectacular stories here," and by that he meant that all of these stories could have led the volume or ended the volume.

I had to choose where to put the stories based on those readers who read from front to back. I'll explain my thinking (a bit anyway) in the introductions to the stories—provided I can without spoiling the stories themselves.

So, what did I imagine I would get when I asked Fiction River's stable of writers to come up with stories for Justice? I figured I'd get a lot of legal thrillers, stories set in the criminal justice system, stories about crime and criminals. I specifically asked writers to look at different locations and different historical periods.

I got stories set in different time periods. I only got two stories about the law per se, and not a one of them had the point of view of an attorney. (So no modern Perry Mason here.)

What I got—and what pleases me the most—is a wide variety of justice. Most of the writers started with a grave injustice, and then put that injustice to right. What these stories have in common, besides their high quality, is a thread of righteousness that goes through them. Whether that righteousness is deserved, well, you readers can decide that.

I love it when writers make my job hard. And these writers have done so. I'm really proud of this volume of Fiction River. Not because I assembled it, but because it includes some of the best stories I've read in years.

I hope you will feel the same. Enjoy!