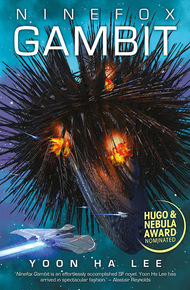 When Captain Kel Cheris of the hexarchate is disgraced for her unconventional tactics, Kel Command gives her a chance to redeem herself, by retaking the Fortress of Scattered Needles from the heretics. Cheris's career isn't the only thing at stake: if the fortress falls, the hexarchate itself might be next.

Cheris's best hope is to ally with the undead tactician Shuos Jedao. The good news is that Jedao has never lost a battle, and he may be the only one who can figure out how to successfully besiege the fortress. The bad news is that Jedao went mad in his first life and massacred two armies, one of them his own.

As the siege wears on, Cheris must decide how far she can trust Jedao – because she might be his next victim.

I got to blurb Yoon Ha Lee's early collection of stories a long time ago, and he's only been getting better and better, so you're in for a serious treat with Ninefox Gambit, his first, incredible novel. If you still somehow haven't read it, you're in luck! – Lavie Tidhar

At Kel Academy, an instructor had explained to Cheris's class that the threshold winnower was a weapon of last resort, and not just for its notorious connotations. Said instructor had once witnessed a winnower in use. The detail that stuck in Cheris's head wasn't the part where every door in the besieged city exhaled radiation that baked the inhabitants dead. It wasn't the weapon's governing equations or even the instructor's left eye, damaged during the attack, from which ghostlight glimmered.

What Cheris remembered most was the instructor's aside: that returning to corpses that were only corpses, rather than radiation gates contorted against black-blasted walls and glassy rubble, eyes ruptured open, was one of the best moments of her life.

Five years, five months, and sixteen days later, surrounded by smashed tanks and smoking pits on the heretic Eels' outpost world of Dredge, Captain Kel Cheris of Heron Company, 109-229th Battalion, had come to the conclusion that her instructor was full of shit. There was no comfort to be extracted from the dead, from flesh evaporated from bones. Nothing but numbers snipped short.

According to the briefing, the Eels had a directional storm generator. The storms scrambled vectors. The effect was localized, but it was troublesome when parallel columns ended up at opposite ends of a road a hundred kays apart, and fatal when movement along the planetary surface sent you underground instead. Too close and the storms might disintegrate your component atoms entirely. Cheris and the other captains had been assured that the weather-eaters would keep the storms contained, and that all the Kel infantry had to do was walk in and seize the generator.

That had been eighteen hours ago. It wasn't that anyone was surprised by the plan's failure. It was the carnage.

Heron Company had left the cover of the southwestern woods a scant eighty-three minutes ago. The intent was to advance in a tedious snaking curve east and then north around Hill 117 because intelligence had indicated that the Eels' vanguard would occupy the ridge nearer the woods and leave the hill route open. It was as Cheris's company made it out of the woods that they saw what had happened to the Kel who had preceded them.

Cheris was unable to organize her first heart-stop impressions of what had been the rest of the battalion. Feet scraped inside-out next to unblemished boots. Black-and-gold Kel uniforms braided into cracked rib cages. Gape-jawed, twisted skulls with eye sockets staring out of their sides and strands of tendon knotted through crumbling teeth. A book of profanities written in every futile shade of red the human body had ever devised, its pages upended over the battlefield from horizon to horizon.

Her company had survived thanks to dumb luck. A field grid error had delayed their advance, so they had missed the brunt of the attack. She didn't know if any other companies, or the other battalions, had made it. Her inability to raise regimental headquarters didn't come as a surprise. Communications going down was nothing new. Orders were orders, however, and it was best to move forward. Once they got close enough, the main body of the Eels would no longer be able to deploy the storms against them, lest they, too, be caught in their area of effect.

Pulses of heat in her left arm alerted her of contacts. Servitor Sparrow 3 reported the coordinates of an incoming Eel battalion, arrival estimated in two hours. The transmission ended in a burst of pain: the servitor had been detected. It was too much to hope that the Eels hadn't recognized it as a Kel servitor, and worrisome that they had let it know that it had been compromised before destroying it. There was no time to mourn Sparrow 3, who had been fond of Kel music; that would have to come later.

"Anything from the other servitors?" Cheris asked her communications officer, Lieutenant-engineer Dineng, over the subvocal relay.

A pause. "Nothing, sir," Dineng said. "Sparrow 8 is investigating the storm ahead."

Cheris frowned at the periodic flickers of reports in the form of visual overlays. If anything, they obfuscated her picture of the situation, but she was used to that.

She monitored relay chatter with half an ear as she compared old maps and new reconnaissance. Certain words crackled out of the soundstream again and again: Eels. Sleep. Storm, fractal coefficient, can't the weather-eaters hurry up. And, for pity's sake, was Kel Inoe going on about his sex life again?

For her part, Cheris wouldn't have minded holing up in the shadow of a rock and sleeping for a week. The week was one of the few time measures the hexarchate didn't regulate. In her old home, the City of Ravens Feasting, they used the eight-day week. When she was tired, it was easy to lapse out of the military ten-day week into the eight. In the furtive tradition of her mother's people, today would be Carrion Day, a reminder of the importance of scavengers. It was difficult to agree.

"Sir." Her senior lieutenant, Kel Verab, brought her out of her reverie. "I don't like the look of the silhouettes on Hill 119." It was southwest of 117. She brought it up on her display and frowned at the complicated silhouette. "Probably an installation of some sort and I bet it's got eyes. I give you odds the Eels will call in the artillery the second they think they can get all of us. Maybe we should keep heading east."

"We can't avoid the heretics forever," Cheris said. "We're going to have to hope that formation defenses hold for us if they start lobbing shells." She addressed the company. "Formation," she said, "Pir's Fan." It had a longer name, but nobody had time for the full names on the battlefield.

Pir's Fan was one of the simpler formations. As its name suggested, it resembled a wedge. It was easiest for Cheris: she held the primary pivot at the van, and everyone adjusted their position relative to hers.

The Kel specialty was formation fighting. The combination of formation geometry and Kel discipline allowed them to channel exotic effects, from heat lances to force shields. Unfortunately, like all exotics, this ability depended on the local society's adherence to the hexarchate's high calendar. And the high calendar wasn't just a system of timekeeping. It encompassed the feasts, the remembrances with their ritual torture of heretics, the entire precarious social order.

Cheris knew the formation's effect had begun to propagate when the world shifted blue and the blacks bent gray. Pir's Fan offered protection against the weather. It was usually better to rely on the weather-eaters, but Cheris had lost any faith that they would be effective on this mission. Unfortunately, the formation wouldn't shield the unit from a direct hit. She hoped to close with the generator before that became an issue.

If the situation changed, there were other formations. The Kel infantry library included thousands, although only a hundred or so were taught as part of Lexicon Primary. You also had to allow for transition time in modulation, especially between less familiar formations. Cheris could feed her soldiers the information through the grid, but it was no substitute for drill.

The march as they swung north steadied Cheris. Here stubby succulents, too low to be credible cover, grew only to be crushed underfoot. The plants gave off a stinging fragrance that attenuated into a watery, cloying sweetness. The regional survey hadn't flagged it as a toxic. Whether the plants had any meaning to the Eels, Cheris didn't know. She would probably leave Dredge, if she left Dredge, without finding out.

Lieutenant Verab alerted her of the enemy sighting via heat pulse. Over the relay, Cheris heard a junior sergeant shouting at someone who had dropped his rifle, a recent recruit who had a talent for botching things.

The Eels' field fortifications, which commanded one of the larger hills, looked like a rough shore in a sea of dust, and their patrols carried themselves with a certain sloppiness. But the distant figures stirred in agitation: Cheris was betting they had thought themselves safe.

Of momentary interest was the Eels' banner, which was of green fire and grim shadow with a twisting motif. The Eels called themselves the Society of the Flourish, although the hexarchate didn't use this name. Taking away people's names denied their power, a lesson Cheris tried not to think about.

Cheris snapped, "Unfurl Kel banner. Advance and fire. I want anything that twitches to die."

The banner-bearers ignited the generator, and fire blazed in the sky. At the heart of the golden flames was the Kel ashhawk, the black bird that burned in its own glory, and beneath it their general's emblem, the Chain of Thorns. Despite Cheris's amusement at Kel design sensibilities – of course the emblem was the flamboyant ashhawk, of course it involved fire – she felt a stinging in her secret heart at the sight of it.