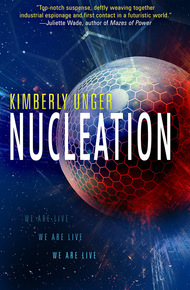 Kimberly Unger made her first videogame back when the 80-column card was the new hot thing and followed that up with degrees in English/Writing from UC Davis and Illustration from the Art Center College of Design. Nowadays she produces narrative-games for VR, lectures on the intersection of art and code for UCSC's master's program and writes science fiction about how all these app-driven superpowers are going to change the human race.

Kimberly Unger lives in the San Francisco Bay Area, where she works in the future of VR on the Oculus gaming platform.

Helen Vectorvich just botched first contact. And she did it in both virtual reality and outer space.

Only the most elite Far Reaches deep-space pilots get to run waldos: robots controlled from thousands of lightyears away via neural integration and quantum entanglement. Helen and her navigator were heading the construction of a wormhole gate that would connect Earth to the stars . . . until a routine system check turned deadly.

As nasty rumors swarm around her, and overeager junior pilots jockey to take her place, Helen makes a startling discovery: microscopic alien life is devouring their corporate equipment. Is the Scale just mindless, extra-terrestrial bacteria? Or is it working—and killing—with a purpose?

While Helen struggles to get back into the pilot's chair, and to communicate with the Scale, someone—or something—is trying to sabotage the Far Reaches project once and for all. They'll have to get through Helen first.

Kimberly Unger – author! Game designer! Futurist! Do you really need a better introduction? Unger is literally working on the future of VR. Most of us just make up stuff for a living! Her debut novel is a fantastic, fast ride into the future. – Lavie Tidhar

The Golfball was reaching the end of its line drive—the hole in one an orbit around an orphan star. No planets depended on that burning ball of resources for life. Nothing would suffer when it launched its payload and started consuming every asteroid within reach. The starship-sized jump-gate would take a year to complete, after which the job of stripping Otlyan23's asteroid ring of every valuable asset could begin in earnest.

"Mark local time 24:48:16." The NAV's voice wasn't in Helen's ear, precisely. She didn't have ears out here. Different bodies took time to get used to, and ears were a luxury item. The vibrations of sound shivered along the walls of the Golfball's interior and filtered through receivers placed along her spine. "Station live. Station live. Station live."

"Live and well, Ted. Operator Helen Vectorovich, personal identifier T4T4-957." She responded automatically, rattling the words and numbers off without thinking. Helen was only the first shift on this year-long project and every shift started this way, every mission, every time. She refocused her vision as Ted worked to unlock the capsule controls from his station in the Fishbowl, a billion miles away. The lights around Helen brightened, moving from hibernation blue to heartbeat yellow. System after system came to life after two years of silent spinning through the black of deep space. From Helen's perspective through the eyes of the waldo, the room opened up like a cathedral, lights and buckypanels rising around her to a point just over her head. In real-world terms, the whole space was the size of a basketball, but from inside the waldo it was oh, so much bigger than that.

"Okay, Helen, let's start running the system checks." In the corner of her vision, a list of tasks popped up, bright enough to be seen, but not so bright that it obscured Helen's view.

"Starting with hull integrity." Helen confirmed from memory, rather than consulting the checklist, and was brought up short.

"No, wait." Ted's voice rang sharply in her head. "Stick to the new protocol, Helen, personal systems first. If your waldo goes out, this all goes sideways." The mission checklist filled the right side of her vision, blurring out that side of the room.

"And if the Golfball goes out?" she asked, even though she already knew the answer he'd give. The checklist slid out of view and was replaced by another, much more intimate list.

"Good thing this waldo works in a vacuum then." Glib replies were part of the job. Confident chatter was a great defense, not just against the butterflies in your stomach, but against the analysts who would go over your comm chatter line by line if anything went wrong. Helen and Ted both had been through that wringer before; the Ferguson's Asteroid Incident had made both their careers, but it had also made them much more careful.

Helen turned her attention back to the waldo's systems. This robot-body wasn't humanoid so much as arachnoid. Eight legs folded up around a glittering central core of processing power and memory shards. Helen carefully unfolded each pair of legs, noting the fine grey dust that arose from them, and sketched her motions in the air. A quick refocus of the lenses showed her the thousands of tiny corpses, left-behind fragments of the nano-robotic eenies that had assembled the ship and its instrumentation out of interplanetary dust. She grabbed a few still images from the waldo's memory and sent them through the quantum feed to Ted's screens.

"Stay focused, Helen. We need you checked out as quickly as possible."

"Yeah, but check out the pics. Everything should have been used up in construction, I shouldn't be seeing these eenie shells all over the place." Everything, from the ship, to the waldo on down to the idiot lights had been built up from a thumb-sized packet of eenies shot through a wormhole the size of a quarter. It was a hugely efficient way to establish a presence around a far-flung system, but it took a long time to build out.

The waldo couldn't scowl, but Helen tried it anyway. Waldo Operators like herself were, in a word, interchangeable, as long as there were protocols, lists of instructions to follow. No one pilot got too comfortable with one kind of waldo because you never knew where they were going to put you next.

"Fine." Helen ran through the checklist, meticulously testing each joint, each actuator, every fiber in the robot body she was remote-piloting. The automatic checks had been run well before she'd been Entangled. These first tests were all about her ability to control the body down to the fingertips. Ninety percent of her jobs were like this, following the list, endless lists that could just as easily be run by an AI, if you asked most people.

Leg eight felt sluggish, Helen felt it before the computer gave her the heads-up. Less than a millisecond slower than its siblings to respond, it took her a little extra focus to get it to match pace with its twin. "Ted, are you getting this? Leg eight?"

"Affirmative. Still inside the workable parameters."

"Yes, but it still should be a perfect match. This whole rig is professionally built, not extruded by some kids' crappy apartment printer. It's not supposed to have that kind of slippage."

There was a pause before her NAV replied. Entangled communication meant no lag-time, which meant that Ted was considering, or maybe consulting with someone before he replied. "Helen, are you telling me you cannot work within these tolerances?"

"No, I'm handing you the opportunity to wring a mea-culpa payment out of whatever contractor slipped a decimal point." Smartass was the only response that played well. Too many complaints got you written up. Keep the NAVs laughing and they might not take every comment seriously enough to notate. Piss a NAV off and you'd hang yourself with the rope they'd given you.

Except Ted. She'd been partnered with Ted long enough to know he wasn't about to write her up for being particular. Helen handled the hardware, Ted handled the management. Between the two of them they'd managed to stay one of Far Reaches' top operations teams for the past year. A position that made high-profile gigs like running the Golfball much easier to get assigned to.

Ted's snort reverberated in her head. "Good luck collecting on that . . . it's all code by committee these days, you know that."

"Team-based engineering provides better results," she quoted, tossing a line from one of their training manuals back at him. In the years since they'd arrived at Far Reaches, they'd found their rhythm working within a structured system, but Ted's rebellious streak was always looking for an opportunity to complain. Three years ago, the Ferguson's Asteroid Incident had made them an inseparable team, which meant covering for each other's personality quirks. Ted handled the people, Helen handled the hardware.

"Committees aren't teams, Helen. In fact, they're the opposite of teams." She could hear his voice change, the words spoken so the rest of the team back at Flight Ops could hear him.

Ted never could resist an audience.

The items on the task list turned green one by one as Helen worked her way down the line.

"Are you seeing the bad sensor on memory shard three?" he asked.

"Yep." Helen stretched out an arm and popped a claw-tipped manipulator out to give the shard in question a tap. The numbers on her screen shifted, running up and down as it shifted in the socket. "It's just loose, hold on."

"I'm deploying point-one-one picoliters of mix M37 at the base to re-seat the shard." Helen rattled off the specifics so Ted could add them to the mission report. The blue gel, loaded with specialized eenies, filled the empty gaps in the socket and started to harden immediately. "Can you run the diagnostic?"

The eenies were too small to hold their own programming. They would pick up on the instructions Ted broadcast through the NAV computer and repair the chip's base to match the specs. As long as he sent the right programming streaming over the air, everything would go smoothly.

"It's not supposed to be loose, Helen."

"Congratulations, that makes two, count 'em, TWO mea-culpas on one job. Company record is five, Ted, are we going for the record on this trip?" Helen was settling into the waldo properly now; dispensing the repair mites had been as simple as drumming a fingertip on a dashboard. It was telling, the things that Ted worried about. As long as she'd known him, his focus had been on the people, the reports, what to say and how to say it—he was the medium between the managers and the waldo-jockeys like Helen.

The memory shard came back online, joining the twenty others now jostling for her attention. Helen put them out of her mind for now, focusing on getting the checklist out of the way so they could get on with the fun stuff.

"Are you seeing the readings from array two?"

"I'm breaking protocol." Something in his tone of voice shifted, a note of panic that shouldn't have been there. "NAV override one-five-five."

Helen felt the locks release and her waldo was free, unrestricted. It was amazing. It was totally off book. She didn't dare move a finger, or a claw. "Ted, what's up?"

"Remember how we were just talking about how you could fix the Golfball?"