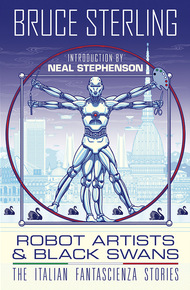 Bruce Sterling (Schismatrix, The Zenith Angle, Zeitgeist) is an internationally bestselling author, journalist, editor, columnist, and critic. He is perhaps best known as the author of ten visionary science-fiction novels and as a founder of the cyberpunk movement. He was also the editor of the quintessential cyberpunk anthology, Mirrorshades. Sterling's much-heralded nonfiction includes The Hacker Crackdown: Law and Disorder on the Electronic Frontier and The Epic Struggle of the Internet of Things. A renowned expert on technology, Sterling has appeared on ABC's Nightline, the BBC's The Late Show, MTV, TechTV, and Wired, where he is a featured blogger, as well as in Time, Newsweek, the Wall Street Journal, the New York Times, Fortune, Nature, La Stampa, La Repubblica, and many other venues. He splits his time among the cities of Austin, Turin, and Belgrade.

The Godfather of Cyberpunk has emerged in this new collection of Italian-themed fantasy and science-fiction stories. Bruce Sterling now introduces us to his alter ego: Bruno Argento, the preeminent author of fantascienza. Sterling, writing as Argento, skillfully combines cutting-edge technology with art, mythology, and history.

In the Esoteric City, a Turinese businessman's act of necromancy is catching up with him. The Black Swan, a rogue hacker, programs his way into alternate versions of Italy. A Parthenopean assassin awaits his destiny in the arms of a two-headed noblewoman. Infuriating to both artists and scientists, a robot wheelchair makes uncategorizable creations.

Bruno Argento is the acknowledged master of Italian science fiction. Yet that same popular fantascienza author also is known in America—as Bruce Sterling. In Robot Artists and Black Swans, we present the first collection of their uniquely visionary Italian-themed fiction, including tales never before published in English.

Bruce Sterling is a legend (that goes without saying) and this latest collection showcases him at his best and zaniest: be prepared to have your mind blown! – Lavie Tidhar

It embarrasses me that Italians have been to the Moon.

As a scientist, of course I admire the Moon. But why are Italian celebrities bounding around up there in an operatic spectacle? Why are we Italians always so guilty, in the sober eyes of the global public, of these undignified extravagances?

I have heard all the arguments in favor of the Italian Moon trip. Yes, I know that Italy was one of the first space powers: Italy built the Vega launcher, Italy explored comets, Italy built all the best-looking pieces of the International Space Station. Other nations had their space programs in the past century, too: the Japanese, Indians, Chinese. Why are we Italians the only people who still believe that space flight is romantic?

Of course many companies still launch hundreds of unmanned weather, communications, and observation satellites. Everyone agrees that the commercial space-launch industry is profitable, useful, and necessary. I make no protest there. My specific complaint is about my fellow Italians loudly trampling the Moon. Why are we gleefully celebrating this empty publicity stunt? Why can't we see how silly this is?

Yes, this year is the centenary of the first manned flight, of Yuri Gagarin, in April 1961. We Italians are always painfully keen on historical anniversaries. I agree that something solemn should have been done to honor this brave though long-dead cosmonaut. That should have been done in some archive in Moscow—not by two Italian celebrities in brightly colored spacesuits clowning around on the Moon.

History tells us that the Americans sent two highly trained astronaut-soldiers to the Moon. The American astronauts spoke seriously to mankind about world peace. And who did Italy send up there? Some eccentric billionaire and his busty actress girlfriend. Both of them on live global television!

I don't care how many billions of people enjoyed this silly video. His jokes about lunar science were not funny, and she's not as sexy as people say. Their new world fame, all those ticker-tape parades—that crude popular reaction only intensifies the embarrassment of intelligent, cultured people.

It's not that I oppose space tourism. I can understand space tourism. All Italians understand tourism. We Italians have been world masters of the tourism industry for seven hundred years. So of course the Italians can, and we do, make all the private spacecraft for wealthy space tourists. Who else would do that kind of work? We make the best spacecraft in exactly the same way that we make the world's best yachts, sports cars, and ski equipment.

I can also understand the appeal of some quick tourist jaunt into orbit. I wouldn't do that myself, but being weightless clearly has some attractions for certain people. You fly into zero gravity, you bring along a pretty girl, you pour some bubbly prosecco into strange fizzing spheres: things follow their natural course. I understand all that, and I don't complain about it. Millions of tourists behave in that fashion in Italy every single summer, and no one is ever surprised.

Yes, the Gabriele d'Annunzio is a very beautiful rocket ship. With such superb Italian industrial design, obviously it is the prettiest manned lunar rocket ever built. I also admit that creating a spacecraft that runs on clean, renewable Italian solar energy was a nice piece of public relations.

In fact, all the public-relations aspects of this stunt were handled very cleverly: the lunar theme music, the sleek designer logos, the sexy spacesuit costumes. Even the Eurovision dance routines at liftoff were surprisingly good.

But a Moon launch? Surely we must admit that was extravagant! We Italians are one of the world's oldest peoples: Can't we behave as adults here? Here, in the year 2061, it should be obvious to everyone that a manned flight to the Moon is an empty-headed lark! It simply does not matter in any important way! This act has no public consequence!

I don't care that they planted the Italian tricolor all over the Galileo Crater! The beautiful inflatable tent with the seamless plastic furniture did not impress me! When they took two hours for lunch, and ate their freeze-dried grissini . . . All right, I admit it, that Piedmontese grissini was an interesting choice. Eating grissini on the Moon, that took some imagination.