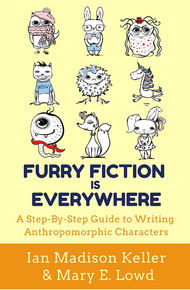 IAN MADISON KELLER is a fantasy writer currently living in Oregon. Originally from Utah, he moved up to the Pacific Northwest on a whim a decade ago and never plans on leaving. Ian also wrote under the name Madison Keller before transitioning in 2019 to Ian.

MARY E. LOWD is a prolific science-fiction and furry writer in Oregon. She's had nearly 200 stories and a dozen novels published, always with more on the way.

Have you ever read a book or novel and wondered why they even bothered to make certain character(s) in the book something other than human? Want to avoid that in your own work?

There are some simple steps you can take to make your anthropomorphic (or furry) characters stand out on the page. This guide will walk you through step-by-step how to build a believable furry species, world, and characters.

Includes downloadable worksheets to get you jump started on your furry writing journey.

Part 1: What is Furry Fiction

There are almost as many answers to this question as there are people. Furry will mean something slightly different to everyone who asks. For the purpose of this book, furry is any writing that heavily features either a character with animal-like traits or an animal-like character with human-like intelligence and personality.

As you can see, this definition is rather nebulous and broad. Lots of things fall under the furry umbrella that wouldn't at first glance be considered traditionally furry.

Another term you'll encounter in this book is "scalies" which is used for non-furry creatures like lizards, dinosaurs, fish, avians and the like. Furry is generally used as the default term, with non-furred creatures lumped in under the 'furry' umbrella.

The furry fandom itself began around the 1980s, although the exact date is arguable. The 80s date gets called into question, with some arguing the fandom started even earlier, with the release of Kimba the White Lion, Watership Down, and Disney's Robin Hood. Either way, furry has been around for at least forty years, and looks to be gaining in popularity with skyrocketing attendance at conventions around the world.

Although furry is primarily a visual fandom — with comics, movies, art, and costumes being the most popular aspects — there is also a large and growing literary tradition. Along with visual artists, there is a large contingent of writers, and many recurring anthologies that have been running for over a decade as of this writing. There are an increasing number of writers who can make a living writing furry fiction, either with commissioned stories or through more traditionally published works.

By picking up this book, you've expressed an interest in furry fiction, and it's a fair assumption that you are considering trying your hand at writing it, and are possibly wondering where to get started.

But before we talk about where we're going, let's first get ourselves grounded in where the genre has been.