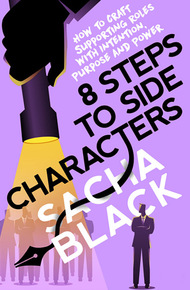 Sacha Black is a bestselling and competition winning author, rebel podcaster, and professional speaker. She writes educational nonfiction books for writers and fantasy books for both Young Adult and adult audiences. She lives in Cambridgeshire, England, with her wife and son.

8 Steps to Side Characters by Sacha Black

Do your characters fail to bring your story to life? Are they flat, boring or have no depth? Is your story lacking a little cohesion or sparkle?

In 8 Steps to Side Characters, you'll discover:

8 Steps to Side Characters is a comprehensive writing guide that will help you create the side characters your story needs. This book is packed with tips and tricks for polishing characters for writers at any level. If you want to power up your characters, eliminate dull and lifeless archetypes, and perfect your characterization, this is the book for you. By the end of this book, you'll know how to strengthen your characters to give your story, prose and plot the extra something special it needs to capture a readers and fans for life.

If you like dark humor, learning through examples and want to create better side characters, then you'll love Sacha Black's guide to crafting supporting roles with intention, purpose, and power. Read 8 Steps to Side Characters today and start creating kick-ass stories.

Where we pontificate about inevitability, break, burn, and banish the rules to the fuckit bucket, and discover why your imagination should be a rebel.

Of all the books I've written, this one was perhaps the most inevitable. Once you've spent time chiseling out your heroes into sculpted muscle-shaped weapons, and you've spent equal time crafting the ultimate villain—and yes, equal is italicized for a reason: bad guys deserve, demand, and require as much time spent on their creation as your heroes do—where else is there to go except your devious little minions?

Next in line are your friends and allies, mentors and mischief-makers, all the characters that make up supporting roles.

See, every time I write a book on characters, I impress the importance of developing that particular type of character. Villains are vital to conflict and storytelling but heroes are the lens through which your story is told… but what about side characters? It will come as no surprise to you that side characters are… you guessed it, super important. These pesky players need your attention because they are the pillars that prop up your protagonists.

Too often, writers slap a few side characters into their novel like they're nothing more than jam in a peanut butter and jelly sandwich. Tut, tut. That's not how these pillar-pumpkins should be treated. We need to paint them with as much skill and dedication as we've sculpted our muscled heroes and deadly demons.

To be clear, while this book will provide a raft of tips and tricks for helping you improve your characters and characterization overall, I focus predominantly on side characters. For the sake of simplicity, I'll mostly refer to "side characters" but insert whichever phrase is most relevant, be that supporting roles, minor players, sub characters, or any other name that tickles your nips.

Let us dwell on rules for a moment…

Teddy bears are for kids.

Well, my cat eats them for a tasty weekend snack—apologies to the baby bunny conservation society, no offense was meant in the writing of that sentence.

Why are we talking about treacle and bunnies when we're learning about characters? Come now, my sinful wordsmiths, you know me well enough by now (and if you don't you will shortly); we need at least a brief chapter of hyperbole before I give you the good stuff. The tidbits and tactics for delightful character creation are coming, I promise.

But first, where was I? Ah yes, the rules.

Rules are shaped like cuteness and fluff, but really, they're demonic restraints sent from the literary under-gods. They are the enemy of muses, fledgling writers, and seasoned pros. A rule's sole goal is to thwart your book-writing shenanigans and constrain your imagination. Oh, and I do mean "writing rules." I'm not talking about the legal ones like "thou shall not murder, thieve or harm." I happen to agree with those ones. Those ones keep the assholes in line. Don't be an asshole—they're full of shit rather than words.

I like to start my craft books discussing the merits of rules in writing because, well, there are many, and mostly they're all bullshit. Unfortunately for us creatives, bullshit seems to spread quicker than viruses.

Here's the thing, for every teacher who ever told you to "show don't tell," I can show you a dozen ways "telling" can be effective and pull out a dozen random books all with moments of telling sprinkled liberally over their pages.

There are Oxford comma preachers, tutors who hate adverbs, ones who say even purposeful repetition is bad and yet more who will say you can never filter as an author.

For every reader who adores clean prose, there will be a plethora of others who much prefer indulgent, rich prose. That's why we have R&B, Dubstep, and acoustic music. Everyone likes their own shade of sound. And readers, the darlings, like their own shade of sentence.

But… as much as I like to break a lot of rules, it would be remiss of me not to admit that these supposed rules do come from somewhere. Many of them were supposed to be guidelines, suggestions to help you say exactly what you want to say—rather than what you think you said—which actually came out more like the strangled afterbirth of a hangover. Over time, these "supposed" rules became cardinal law. Someone dipped their fingers in the ink well and played God with us lowly wordsmiths. That was a booboo.

Whatever your word fetishes are, it's okay. You can rub adverbs over your word-nipples if you like. I mean, I don't want to, but if that's your thing, you do you, baby.

Any rule can be broken if you're skilled enough. When I say "must this" and "must that," you don't have to agree with me. I'm not here to argue with you. Just to present some principles and techniques you could use to help you craft solid side characters and minions for your stories.

What I do suggest, though, is that you spend some time both reading and researching in your genre. See, while I don't care much for rules, there are many readers who do appreciate it if you give them the tropes of their genres. A romance reader is gon' be pissed if you don't give them a happily ever after. Epic fantasy readers have a penchant for the epic, crime books… well, they need a dead body—some "rules" are rather important.

I'm not going to detail the construction of supporting roles for specific genre tropes, it would take a book the size of an encyclopedia and it's your job to know your genre.

Consider this your first piece of homework, if you can't reel off at least five tropes or expectations in terms of style, length, tone for your genre without having to scan your bookshelf, you don't know your genre well enough. Take your word-booty to your local independent bookstore and buy some books. Better still, help your friendly neighborhood indie author and order a couple of their books from your genre too.

Now, I always like to caveat my books. Here's why you should put this book down:

•You've come for advice about heroes and villains. Erm… I've already written those books. If you're after specifics for improving your protagonists or antagonists, then I have two books that will help you:

13 Steps to Evil: How to Craft Superbad Villains

10 Steps to Hero: How to Craft a Kickass Protagonist

You should note though, there will be some deliciously helpful principles in this book for developing any character—heroes and villains included—but we are, in the main, focusing on those devious little side characters.

•You're not interested in developing your characters. Did you miss the title of this book? With craft, characters, or writing in general, I do insist you push yourself outside your comfort zone—it's the only way to develop. If you don't want to do the dirty and aren't willing to look at where your writing needs to improve, then you're wasting your time reading this. Yes, I'm not pulling punches, I'll always give it to you straight. It's a theme. You should probably get used to it.

•You don't like dark humor or swear words. I have a hardened potty mouth—her name is Helga, and she's at least eight hundred and fifty-six (and a half). Which means she's old, has a twisted sense of humor, and enjoys making shit up. It is what it is. It's my burden to carry. Helga is a rather delightful shade of marmite—either you love her or hate her—I understand if you fall into the hate camp of marmite fuckery.

Examples in this Book

In this book I've used examples from works I've written as well as from popular books, TV, and film. Why? Because a significantly larger proportion of the population have watched TV and movies than read books. Which means if I use a movie example, it's far more likely to resonate with a larger portion of readers. That aside, movies do in ninety minutes what authors do in four hundred pages. Movies are books on steroids—they're concise and the good ones have cracking story structure. I know it's controversial, but Disney/Pixar films create an array of excellent examples of different storytelling devices. We can all learn something.

While I love using quotes and examples from "in real life" books and Hollywood, to deliver this book to you sometime during my lifetime, it's occasionally quicker to construct an example than it is to trawl through the thousands of books I've read looking for something specific. I encourage you to do your own research and find examples from your genre for whatever devilish delight we're talking about.

I've given spoiler warnings at the top of each "step"; I've been as comprehensive as I can be, which means some of the spoiler warnings are for referencing just the first line of the story, others are full breakdowns of the novel.

Are you ready to push up your Shakespearian sleeves and dive into improving your side characters?