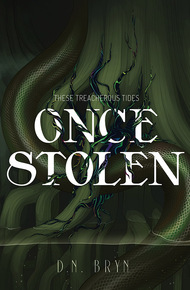 Danny Bryn is a queer, disabled, non-binary speculative fiction author of the liberal Jesus-freak variety. When not writing, they conduct infectious disease surveillance in their hometown of San Diego, where they enjoy basking in the Santa Ana winds, hiking the brush-heavy slopes, and eating too many tacos.

Once Stolen by D.N. Bryn

No one with half a brain would rob the jungle's most notorious energy cartel. The vibrations of their power-producing stones are the only thing that calms the mer-snake Cacao's agonizing sensory condition though—and after being banished from his homeland swamps for similar thefts, he's desperate.

When his attempt fails stunningly, a chaotic escape leaves him chained to a cartel prisoner: a self-proclaimed hero with a hidden stash of power stones so large, Cacao would never need to steal again. He's determined to get his hands on it, even if it means guiding her home straight through the mist-laden and monster-filled swamp that exhaled him, with scheming poachers and a desperate cartel leader on their tail.

But the selfish and the self-righteous can only flee together for so long before something snaps...

ALL THE SHADES OF GREED

Banishment isn't a curse if it means escaping all of you.

THE THRUMMING POWER OF the ignits calls to me. Five small variants of the round stones lie in the gambler's pot, their slight glow barely visible beneath the cartel boat's canopy. From the shade of the nearby mangroves, I grip the blue ignit on my wire necklace of precious stones. Blue for thunder, like two of those in the pot. But the gamblers have a yellow and a pair of small reds as well.

The ignit beneath my fingers pulses into my scales, primed to soothe whatever skull-shattering nonsense my body decides to throw at me today. But one lonely stone can be easily lost, easily taken. With one stone, the pain still stalks just behind me, waiting to strike. Besides, I want the gamblers' ignits.

Tightening my serpentine tail around the roots of the half-submerged tree, I lift my head a little farther out of the water. I flick out my tongue. The boat humans smell of oil and gunpowder, of arrogance and cowardice and anger, and a touch of fear.

Three of them sit on the boat's main deck, huddled around a table. The vibrations of their voices tingle across the patterned ridges along my scaly scalp. I feel the tug the nearest gives to their beard as they anxiously put down their cards, the slight splash of the lizard dipping into the river down-stream, and the landing of the parrot in the tree branches far above.

But the fishers don't know I crouch so still that the murky water blends with the brown and black patterns along my half-snake body. The boat humans won't notice me like this—won't try to kill me. But if I stay here, those ignits will never thrum in my hands or hang from my wire mesh necklace.

My banishers said this desire would latch inside me like claws through flesh, like my spiny retractable teeth digging into a freshly caught capybara, like a viper's toxin eating me from the inside out. And it has. Oh, it fucking has.

It's just so hard to care now that it's caught me.

The tallest human slams their cards down and strolls to the boat's railing. Their dark skin gleams with a layer of sweat as they wave to a little vessel across the river. The fan at the back of this smaller boat thrums to life, powered by an ignit buried somewhere in its engine. It pulls alongside the larger boat.

"You already out?" the driver asks with a series of hand motions stolen from the swamp natives. I assume the boat humans use them to talk over the vicious whirr of the fans and roar of their motors, though most also sign whenever they use spoken language, which I have no ability to hear.

"Lay off," the disgruntled human signs. They climb onto the smaller boat and speed down the river.

My gaze jumps to the remaining gamblers. Even with one human gone, these two still look like a challenge. The bearded player sports muscles as thick as my own, and their slighter opponent crouches in the shadows like a jaguar, hidden beneath a wispy cowl and shawl.

I guess we're all gambling today.

Unfurling my tail from the roots, I take a deep breath and slip into the water. I undulate as I swim, though my humanlike torso moves with far less precision than my flexible tail, its bulk twice as powerful and three times as long as two legs combined. The fish withdraw around me, the flex of their muscles tingling along my head ridges. I keep to the dimly lit river bottom.

As I pass over a scattering of stones in the clay-heavy soil, I skim the silt with my fingers. A round grey rock that could almost be a clingstone or maybe a perfectly worn hematite tempts me, but the blotch of red on its back proves it to be just a normal river pebble. I leave it be, the vision of those glorious ignits still burning in my mind.

The image of a fang embellishes the front of the boat's flat hull, and a large cabin sits at its back, a stairway leading up to its cargo-filled rooftop deck. Two fans swoop out from either side, their blades currently dormant. I surface beneath one. With the cabin shielding me from the human's view, I climb the fan blades like a ladder, twisting my tail into their ridges to brace myself. Unlike the massive central fan at the back of the boat, these will only bruise me if turned on. Bruises fade. The scars I received learning that lesson won't.

I near the cabin's roof, but the rumbling vibration of a shout halts me. I peek around the corner. At the gambling table, the bearded human's face shifts, their mouth and brows moving. These expressions mean little to me, but eagerness wafts from the human as potent as the sweet burst of an overripe mango on the jungle floor.

I pull myself onto the cabin's rooftop deck and slide between the crates, just out of sight. A burst of new scents hits me—leather and wine and the sun. I spot the owner through the cracks between two crates: Rubem, the newly established head of the Fang Ignit Cartel, who slipped in like a rat in the wake of the last leader's sudden death. When the crew talk about him, they keep their signs small and their mistrust big.

He crouches near the back of the boat, his mass of dark braids tied in a high bun. Three claw-like rings sprout from his right earlobe. A pistol glimmers at his belt, the sheen of the dark copper hilt matching his skin. Its embedded emeralds contrast the shock of scarlet hemming his loose brown cloth-ing.

I try not to look at his hands, at the fishnet gloves I know I'll find there, but when he flicks a vial of glowing green liquid between them, my gaze goes to his fingers anyway. My scales itch, a creeping pain that only diminishes when I focus on my ignit's gentle pulsing.

Despite the vial's impeding presence, Rubem signs with a contained sharpness, the motions fluid but precise. "You know where they are, you were her daughter. But you clearly aren't using the damn things. Let them not go to waste."

The person he speaks with looks delicate, the soft curves of her tan face placing her somewhere well beyond childhood but not quite worthy of anyone's respect yet. About my age, then. Her brown curls spill down her back, and grey and green fabrics hang off her in layers, a scarf wrapped like an ana-conda around her neck. A chain on her ankle rattles when she hugs her legs closer. "I don't care." Her hands tremble as she makes the motions, her lips remaining closed. "The cartel can't have them."

"You realize that whatever you choose, I will find them." He makes his claw-handed grabbing motion for the word will far stronger than the rest. "There are stakes here more important than you realize."

But the prisoner only stares toward the front of the boat, tapping a steady rhythm against her leg. She jerks at the vibration of a laugh from downstairs.

Rubem flinches as well, glancing over his shoulder. When he looks back at the prisoner, his expression makes her curl tighter into herself. "If—when—she finds out you're here, she'll flay you alive and string your guts from the canopy to get ahold of your mother's hoard. So, I would be quiet for a while if I were you." He pockets his glowing flask with a sharp snap, bursting to his feet. "And we'll have a longer conversation about this later. Giving up that hoard is for the best, you'll see."

I duck as Rubem marches by my hiding place and de-scends the stairs, his footsteps remarkably silent for such fury. His shouting vibrates off my head ridges a moment later. It fades as he and the shadowy gambler walk into the cabin beneath me. The bearded human continues to watch their cards—and the ignits. I rub the ignit on my necklace and clench my jaw, unhinging and rehinging it.

Motion behind me flickers along my head ridges. I turn to find the prisoner poking her head around the crates. Her eyes widen, long black lashes drawing back to reveal hauntingly blue irises. A shiver runs through me. I coil the extensive loops of my tail, preparing to lunge at her.

She lifts her hands. "Stop, please—I don't know if you understand this, but please—help me."

I can't smell her emotions, can't tell whether she's truly panicking or only trying to lure me in, but her words still make me pause. I have absolutely, positively no desire to talk to this scentless boat human. But being banished to a place where most people want to kill and eat you does weird things to a person. Things like making them hesitate