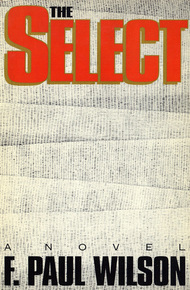 F. PAUL WILSON is the award-winning, NY Times bestselling author of nearly seventy books and dozens of short stories spanning sf, horror, medical thrillers, adventure, and virtually everything between. More than 9 million copies of his books are in print in the US and his work has been translated into 24 languages. He also has written for the stage, screen, and interactive media. He is best known for his urban mercenary, Repairman Jack. He was voted Grand Master by the World Horror Convention and received Lifetime Achievement Awards from the Horror Writers of America, the Libertarian Futurist Society, and the RT Booklovers Convention. His works have received the Stoker Award, the Porgie Award, the Prometheus and Prometheus Hall of Fame Awards, the Pioneer Award, and the prestigious Inkpot Award from San Diego ComiCon. He is listed in the 50th anniversary edition of Who's Who in America.

In 1983 Paramount rendered his novel The Keep into a visually striking but otherwise incomprehensible movie with screenplay and direction by Michael Mann. Paul has recovered US film rights and a new version will soon be in the works.

The Select by F. Paul Wilson

Coming from a farm family of modest income, Quinn Cleary can only go to medical school if she is accepted by The Ingraham, whose program is so exclusive that application is by invitation only and all expenses are absorbed. She is crushed by her rejection but some quick and devious action on the part of her friends gets her enrolled. Quinn finds the education almost too good to be true until she notices subtle changes in her classmates, a common line of opinion, and a mysterious "Ward C." Could it be that the medical students are being brainwashed? Could the school's administration be frustrated with tedious and lengthy FDA regulations and be experimenting on humans? As Quinn tackles the mystery, she puts her own life in danger as her discoveries threaten to topple a pharmaceutical empire. A suspenseful medical thriller so believable it could almost pass as nonfiction."-Library Journal

Quinn followed the rest of the tour in a state of rapture. The Ingraham's five story hilltop complex was a temple to the art and science of medical research. The third floor was actually a miniature pharmaceutical plant, producing experimental compounds for trials in the treatment of lupus and cancer and AIDS.

They've got to take me, she thought again. I've got to go here.

The fourth floor was a vivarium housing the center's experimental animals. The pungent odor of its inhabitants filled the air. The stacked cages full of doomed rats and mice didn't bother her. As a farm girl she'd learned early on not to get attached to the livestock. But the array of whining dogs, meowing cats, and wide eyed monkeys made her acutely uncomfortable. She was glad to move up to the top floor.

"This is Dr. Alston," Mr. Verran said when they reached the fifth floor. He presented a tall, sallow, gaunt, balding, fiftyish man in a lab coat. He had watery hazel eyes,slightly yellowed teeth, and a string tie. "He's not only Director of Medical Education at The Ingraham, but one of the country's foremost dermatological pathologists." He glanced at Dr. Alston. "Did I say that right?"

"Looks like Uncle Creepy," a voice whispered near her ear.

Quinn glanced around and saw Tim Brown standing close behind her. He was still wearing his dark aviator glasses. Indoors. Maybe he wanted to hide his bloodshot eyes.

"I'm going to place you in his hands for the final leg of the tour," Mr. Verran was saying. "The research they're doing up here is so secret even I don't know what's going on."

Dr. Alston stepped forward. His smile toward the security chief was condescending.

"Mr. Verran has a tendency to exaggerate. However, we do try to keep a lid on the data from the fifth floor. Our projects here have commercial applications and we wish to protect the patents. Any profits from those applications will, of course, be plowed back into more research and to maintain funding of the school and the medical center. Follow me, please."

As they trooped after him down the wide hallway, he continued speaking over his shoulder. "I can't show you much, I'm afraid. My own project is in the human trials stage and we must respect the subjects' privacy. But I can tell you that I'm working with a semisynthetic, rejection proof skin graft which I hope, once perfected, will completely change the lives of burn victims all over the world. But perhaps...there he is now."

Down the hall ahead of them, someone in a labcoat stepped into the hallway.

The other man turned. He was older, a shorter, and plumper than Dr. Alston. He sported an unruly mane of white hair and bright blue eyes.

Quinn turned and gave him a hard look that told him to knock it off.

The man called Walter looked up at Dr. Alston over the tops of his reading glasses, then at the crowd of applicants. He smiled absently.

"Yes, Walter. Walk us through your section, won't you?"

The shorter man shrugged. "Very well, Arthur. As long as you do the talking."

Dr. Alston half turned and began moving his shorter, heavier companion down the hall. The group followed, Quinn on the left end of the leading phalanx.

"Dr. Emerson is too modest to tell you so himself, but the work he is doing with a new anesthetic compound is absolutely astounding. He hasn't named it yet, but it does have a code number: 9574. If our animal studies translate to the human nervous system, 9574 will offer total body anesthesia and selective skeletal muscle paralysis. I can't say more than that, but if we're successful, 9574 will revolutionize operative anesthesia."

The tile wall to Quinn's left became plate glass and she stopped, staring.

A room beyond the glass, a ward, filled with hospital beds. And in those beds, pure white bodies. Quinn blinked. No, that wasn't pale skin, it was gauze. The bodies were gauze wrapped from head to toe. Blue, green, red, and yellow patches on the gauze. They didn't move. Seven beds, seven bodies, and not a sign of life. They looked dead. But they had to be alive. Nurses—gloved, gowned, masked—glided among them like wraiths. There were IVs and feeding tubes running into the bodies, and catheters trailing out from under the sheets down to transparent bedside collection bags filled with clear golden fluid.

She felt someone bump against her back, and knew it was Tim.

"Jesus," he said. His voice was hoarse.

What? No crack about mummies? She glanced at his face, saw his awed expression, watched his Adam's apple bob as he swallowed. He seemed genuinely moved. Quinn stared again into the ward and was startled to see a bed directly before her on the other side of the window. The body...patient...person in the bed was wrapped head to toe in thick white gauze. Only the bridge of the nose and a pair of dull, rheumy, blue eyes remained uncovered. Those eyes were staring up at Quinn. They searched her face as if seeking something there. The patient looked vaguely male...the shoulders were broad, the chest flat.

The entire tour had stopped and gravitated toward the window, crowding behind Quinn.

"Oh, dear. Oh, my." It was Dr. Emerson, squeezing toward the front. He looked flustered. "This is Ward C. Dr. Alston's ward. The curtain should have been drawn on this window. Not that there's anything confidential going on, but for the sake of these patients."

"Wh what happened to them?" Quinn said.

"Burns," Dr. Emerson replied, his voice soft as he stared through the window at Quinn's side. "Third degree burns over eighty or ninety percent of their bodies. Not fresh burns. They'd be in hyperbaric chambers at our burn center in the hospital if they were. No, these are burn center survivors. They're alive but so covered with stiff, thick scar tissue that they can barely move. Some of them are brain damaged, all of them are in constant misery." He sighed. "Arthur is their last hope."

Quinn could not take her eyes off the patient before her. Her gaze seemed to be locked into his. His eyes seemed to be trying to tell her something.

"Their beds are rotated by the outer windows and by this hallway window," Dr. Emerson was saying. "They can't move. Very few of them can even speak. It has to be boring beyond belief to spend all day staring at the ceiling. So they're moved around, to let them see the outdoors, let them watch the hustle and bustle of the hallway here. It stimulates them. The nurses have been trained to speak to them constantly. Even if they're not sure their words are being heard or understood, they're communicating continually with these patients."

Communicating...that was what the blue eyes of the patient before Quinn seemed to be trying to do. They were reaching out to her. They narrowed with the effort. Quinn sensed a silent desperation there. The patient began to move. Just a little. Twisting, writhing, ever so slightly.

"Dr. Emerson," Quinn said, pointing through the window. "Is something wrong?"

Dr. Emerson had turned away. He looked through the glass again.

He moved away and spoke through the door to a nurse in the ward. Then he returned to Quinn's side. "He'll get some relief now."

Quinn saw a nurse approach the bed with a syringe. She poked the end of the needle into the injection port on the Y adaptor in the IV line and depressed the plunger.

"As right as anyone can be with that amount of skin damage," Dr. Emerson said. Gently he took her arm. "Come, my dear. These patients and their pain are not on display. Don't rob them of what little dignity and privacy they have left."

As Quinn allowed herself to be drawn away, she glanced back and thought she saw tears in the patient's eyes, and could have sworn she saw his chest heave with a single sob before the inner curtain was drawn across the window.

The remainder of the tour was a blur. All she saw were those eyes, those pain wracked, plaintive blue eyes staring at her, calling to her from within their gauze cocoon.

They've got to take me, Quinn thought for the hundredth time today. They've just got to.