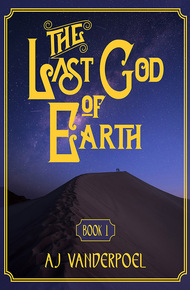 AJ Vanderpoel lives in the woods with (1) human, (3) cats, and a variable number of other random creatures. Despite a colorful work history that includes such standup careers as voiceover artist, 'semi-professional anime convention booth bunny', comic book colourist, TTRPG GM and EMT - all they have ever wanted to truly do was be a storyteller.

Vanderpoel is also the author of the ongoing, free-to-read series "The Nine" (which involves pretty men who actually sentient books, befuddled lesbian magical girls and cosmic horror librarians) and is currently working on an epic post-post-apocalyptic road trip novel.

Thank you for being a part of that journey.

The Last God of Earth by AJ Vanderpoel

Set in a spirit-haunted 10th Century North Africa that never was, Tamourte is a summoner-knight living a life of adventure on the fringes of his community. When pride and curiosity lead him to "liberate" a filthy, ranting barbarian named Sjau, bound for the distant Empire of Ghana, it leads Tam down a road filled with untold danger, wild magic and something that might turn into love – if they live that long.

But Sjau is far more than he seems, and Tam finds that even a familiar landscape can be filled with new horrors.

He always keeps his promises, but how far will Tam go to keep Sjau and his very literal demons from the people determined to recover the most powerful weapon ever created by magic and science? How far will Sjau go to protect Tam from himself?

Far to the east, Tam could see that the stars were beginning to fade into the bleached black of predawn, the distant massif indistinguishable from the sky above. He took a sip of water from the smaller skin lashed to the saddle and looked up at his passenger. "You should drink." He asked, peering up from the heavy layers he'd swaddled himself in.

The wild man, buried in whatever extra blankets he'd had, had been silent for a time, but now he was craning in the tall saddle, looking back into the darkness, the lights of Rhana long since vanished from their sight.

"What, you... want to go back?" Tam teased, but the big man didn't seem to find it particularly funny. He spat something in his sharp-edged language and began to struggle violently to free himself from the tangle of rope lashing him to the tall saddle.

"Woah, woah, stop!" Tam grabbed at him as the camel danced fretfully. "What in the hell are you doing?"

The wind shifted and the distance, the wasteland's mournful song grew louder with the cursing as Tam fought to keep his camel and his cargo from toppling over.

In the chaos, suddenly the rope snapped and one big hand shot straight for Tam's face.

Tam stumbled back, landing on the hard earth. "What that HELL?" He shouted, looking at the other's outstretched arm, then frowned. Something horrible was squirming in Kahramaan's hand.

Tam picked himself up, hand finding the hilt of his sword. It was no spirit and certainly no living thing he'd ever seen before. Clammy and corpse-pale, it scrabbled at the bandages on the big man's hands with tiny vicious claws. Its fitful, clanking wings were made of brass and fabric, and its eyes, like empty silver bowls, were luminescent in the darkness.

And despite its fleshiness, it ticked.

It ticked like the automata dancing in the city square and a shudder of pure revulsion squirmed through Tam's spine straight through to his toes.

"What... what the fuck is that?" He asked, unable to keep the disgust out of his voice. This was something that had no business even existing, that he was certain of. Snarling, Kahramaan struggled to hold on to a furious storm of beating wings, lips curled under his straggly beard, baring sharp teeth.

It threw its head back, and its mouth - far, far too large for such a small creature - hinged hideously open and let forth a chittering, shrieking laugh. The sound bounced off the distant dunes and shivered all around them. It finished by biting down on the Northman's hand with enough ferocity that the big man roared in pain and let go.

It lurched into the sky with another shriek and vanished into the dark before Tam could free the knife at his wrist and kill it. Kahramaan squinted into the darkness, then turned to look at Tam. "You. Run now." He said in a slow rumble.

The desert seemed to shift, the very air thickening with hostility, and Tam swore he could actually smell the oncoming danger. "But we've been having such a lovely night," He said lightly, hand still resting on his sword. "I'd hate to cut it short."

The Rus muttered angrily, fumbling with the rest of the ropes. Watching him struggle out of the corner of his eye, Tam would not have believed how nimbly he had caught the creature just moments before. "What do you think you're doing? You're hardly up for a fight!"

Freed, the big man fell hard off the camel, which idly wandered a few feet away. "You. Should. Run." He said, carefully enunciating every word, a low growl humming in his chest. "Idiot." Tam wasn't certain who that last invective was directed at. Bilma's shawl fell away from his hair, and the tangled strands curled around his damaged face as he scowled into the darkness.

"Weapon." He rasped, growing even more annoyed when it became clear that Tam was, in fact, not running. The Rus jerked his chin towards the desert behind them and Tam felt the unpleasant confirmation crawl up his spine. "Coming."

Tam tugged his heavy iron lance off the mounting on the saddle. "This is the only other weapon I have, and it's not going to be much use on the ground. But I can protect us, y'know." He said, tossing it with a grunt to his companion. "I mean, I may look like your average, devilishly handsome layabout, but I'm really... " his words trailed off as he watched the other man catch the huge, heavy weapon, as absently as he had the hideous little flying creature and drag himself to standing with it.

He hissed, staring out into the distance, and Tam's nose was suddenly assaulted by a whiff of rotten meat. Still muttering to himself, the Rus tore strips from his ragged robe and bound them tight across the bloody bandages already on his hands.

When he finished, the two men stood in utter silence. Even the wind had stilled.

As they looked at each other, Tam was amazed Kahramaan seemed so alert. He still looked like death - his ashy skin clammy in the moonlight, and his good eye sunken and over-bright - but he held himself with a straight back and a grim face. He gave Tam a little nod, and there was nothing Tam could do but nod back in acknowledgement.

They heard the ticking rising with each passing moment, coming from every direction, echoing off the dunes, growing louder with every passing moment. Tam shuddered, each click alone infinitely more terrible than that clockwork bird in Rhana.

He flicked the dagger mounted at his wrist into one hand and drew his sword with the other, moving to Kahramaan's back. "Oh, look." he said, queasy. "It's brought friends."