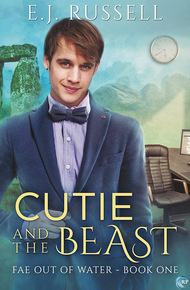 E.J. Russell (she/her) ), author of the award-winning Mythmatched LGBTQ+ paranormal romance series, holds a BA and an MFA in theater, so naturally she spent three decades as a financial manager, database designer, and business intelligence consultant (as one does). She's now abandoned data wrangling, however, and spends her days wrestling words across a rainbow of genres. Count on high snark, low angst, and happy endings.

Reality? Eh, not so much.

E.J. lives in rural Oregon, enjoys visits from her wonderful adult children, and indulges in good books, red wine, and the occasional hyperbole.

Cutie and the Beast by E.J. Russell

Temp worker David Evans has been dreaming of Dr. Alun Kendrick ever since that one transcription job for him, because holy cats, that voice. Swoon. So when his agency offers him a position as Dr. Kendrick's temporary office manager, David neglects to mention that he's been permanently banished from offices. Because, forgiveness? Way easier than permission.

Alun Kendrick, former Queen's Champion of Faerie's Seelie Court, takes his job as a psychologist for Portland's supernatural population extremely seriously. Secrecy is paramount: no non-supe can know of their existence. So when a gods-bedamned human shows up to replace his office manager, he intends to send the man packing. It shouldn't be difficult — in the two hundred years since he was cursed, no human has ever failed to run screaming from his hideous face.

But cheeky David isn't intimidated, and despite himself, Alun is drawn to David in a way that can only spell disaster: when fae consort with humans, it never ends well. And if the human has secrets of his own? The disaster might be greater than either of them could ever imagine.

Alun tried very hard not to be annoyed by Kristof's gushing praise of David, but with every new compliment, his formerly relaxed jaw tightened and his previously lifted brow ridges lowered.

No doubt his eyes had narrowed to slits as well. Even without an unforgiving reflective surface to confirm it, he could tell—he was glowering.

Kristof, either not noticing or counting it business as usual, continued on in his melodic old-world accent. "I had never considered whether a simple stomach remedy might palliate the symptoms."

He waved one long, paper-white hand. "Not anything that trivial." He stilled, as motionless in thought as the corpse he'd never been. "An apple cider base, I believe. Some magic practitioners use cider as a blood substitute in modern rituals. Perhaps that is why I found it so agreeable."

"I doubt the candies possess any magical properties." Shite, could he sound any more like a sulky schoolboy?

Kristof's lips thinned in a wintry smile. "Clearly you haven't tasted one."

"I noticed." His bland tone was its own comment.

Alun remembered that the vampire was bi and tamped down a surge of fae territoriality. David's presence in his office didn't make him Alun's property, especially since he'd be gone as soon as Sandra Fischer stopped sneezing partial panther shifts.

"Right." He forced his hands to relax on the arms of the chair. Whatever his personal issues with David, this was Kristof's treatment session, not his own. "So do you think you'll be able to feed?"

"No. The thought of blood is . . ." A ripple of distaste crossed Kristof's narrow face, the equivalent of a silent scream in a vampire of his age. "No."

"Then why don't we discuss—"

Kristof held up one index finger. "Hold." He cocked his head a fraction of an inch, gaze unfocused. "Do you hear that?"

Alun listened, hands slowly tightening again on the arms of the chair until his nails broke through the brocade. Shite. Gareth's voice. Gareth's harp. The thrice-damned CD. The soft rhythmic thumping that Alun had attributed to nearby construction work took on a different meaning, and he catapulted himself out of the chair. "Wait here."

He yanked open the door.

His entire human PTSD group was snaking around the waiting room like Maypole dancers in search of pole and ribbons, caught in the snare of Gareth's music.

Oak and thorn, had his brother run mad? He was the last of the fae bards. He knew the effect of his music when it wasn't buffered by his non-fae band-mates and the electronic interference of modern musical equipment.

Yet he'd recorded himself playing Gwydion's blasted harp, the most powerful instrument in all of Welsh lore. Anyone who heard this would literally dance until they dropped, unable to escape the spell within any defined circle.

A circle like the ring of furniture in his lobby.

The line made another circuit of the room while Alun hovered in stunned disbelief, and he realized David was in the lead. While everyone else, from the nineteen-year-old victim of an obsessed werewolf stalker to the fifty-nine-year-old witness to the transformation of an entire pack of swan maidens, danced in perfect time to the music, their arms waving with the lyrical grace that a true fae bard always inspired in his audience, David moved like an inebriated zombie.

David jerked and twitched without regard to the beat of the song, punching the air randomly, and occasionally pausing to shake his perfect arse or indulge in arcane movements with his arms, as if he were shaping letters.

If that was his intent, he was as poor a speller as he was a dancer, because the letters resembled an A, a Y, an M, and a C.

David pranced past Alun. "Woo woo woo!" he called, flapping like an agitated owl, and the rest of the group hooted in response.

"I didn't realize vampires made jokes."

"It's a privilege reserved for the highest rank."

"Good to know." Alun strode behind David's desk and killed the CD playback.

Immediately, all the erstwhile dancers blinked at one another, ducking their heads in well-deserved embarrassment. Goddess preserve him, this could set them all back months. Here, in the place where they should be safe, they'd been exposed to another supernatural phenomenon.

David stood in the middle of the room, his arms still raised overhead, the tails of his jacket flaring out like wings, his gaze riveted on Alun. One of the clients, the appliance technician who'd encountered a nest of teenaged vampires while repairing a furnace, slapped David on the shoulder on his way to his seat.

A peculiar feeling swirled in Alun's belly, attempting to climb up his ribs. He clenched his fists, fighting for control, unable to identify the sensation. Goddess, what horrifying remnant of his past had David conjured up now?

Alun glanced around, searching for an escape route, but Kristof was waiting in his office, and one of the clients was occupying the restroom. The whatever-it-was clawed past his chest to the base of his throat.

David lowered his arms and crossed them over his stomach, swallowing convulsively. "Dr. Kendrick. I . . ."

Shite. He couldn't open his mouth or it would erupt. He couldn't let it loose in front of this group, adding yet another trauma to what they'd already suffered.

He turned away from the curious gazes of his clients, from David's flush-reddened cheeks, strode down the hallway as if the entire pack of the Cwn Annwn were baying at his heels, and barricaded himself in the copy room. The space was barely a closet, housing office equipment and a shelf or two of supplies. He braced his hands on either corner of the copier, drawing in huge breaths in an attempt to dispel whatever this was that threatened to burst out of him.

Oak and thorn, he was about to explode. He squeezed his eyes shut as pressure rolled up from his belly through his chest, up his throat and out his mouth in an uncontrolled shout.

Rusty and overwhelming and nearly unrecognizable laughter. He hadn't been tempted to so much as chuckle since the night of his curse. No wonder he hadn't recognized the feeling, but Gwydion's bollocks, it was bloody brilliant.

So he surrendered to it. Completely.

He chortled. He guffawed. He roared. He ran through the entire menu of laughter, gorging on it as if at a feast. Finally, he was reduced to a breathless wheeze.

This was all his doing. Stubborn, impudent, maddening, human David, with his wildly colorful office accessories, constant challenges, and the worst dancing Alun had seen in over two millennia.

Goddess strike him blind, but the man was bloody wonderful.

Now what in all the hells was Alun supposed to do about him?