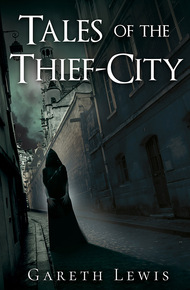 Gareth Lewis has written a number of novels and shorter works in a few genres, including fantasy, science fiction, and thrillers. He lives and writes in Wales, and can be found on Twitter @gdlewis23.

Tales of the Thief-City by Gareth Lewis

It's been years since Rax Darkthorn escaped the hold of the thief-city, Nexi. The death of a friend, and his own addiction to the secrets that permeate the city, draw him back.

In a city of secrets, dying gods, and doors to everywhere, Rax hunts the shadowy figure manipulating events. A trail that'll lead him to Nexi's secret.

'Hey,' he says. The distracted irritation of his expression says he's given up trying to recall my name. 'How are you, my friend?'

Okay, that's way too friendly. Either he has friends sneaking up behind us, or something's wrong. The secrets I see hovering around him don't offer much. In fact, there's fewer than I'd expect from someone with so many buried skeletons. The few secrets on show are indistinct, requiring too much focus.

He smiles at Niv. It isn't a pleasant smile, or a particularly smart one given the blade at her belt. I'd better hold his attention to avoid unpleasantness. Or at least delay it until after I've gotten answers.

His brow creases. 'Baltryn...' he says in a vague voice.

There's a glimmer of recognition in his gaze, and he starts to point behind him. Then he loses interest.

I don't like this. While his state must be due to the demon, I can't be certain what it's done. But I have an idea.

I grab Niv's hand to prevent her rushing ahead, but any attempt to get her out of here without assuaging her curiosity is doomed. I'll admit my own curiosity is piqued, but I have a more developed self-preservation instinct.

'We take it slow until we know what we're dealing with,' I say.

'Oh, come on, you've probably got a good idea.' As, it appears, does she. I'm less eager to be proved right.

She looks at me oddly. 'Bad things happen whether you're cautious or not, so why waste time?'

There's no arguing with her sometimes, but she humours me as we advance. The streets grow desolate before we come into view of the void docks, and the figure's hard to miss, standing alone on the weathered stone pier that juts out into the nothingness surrounding Nexi.

Even from a distance, and from behind, one look is all I need to confirm my fears. It's a lethe demon. It devours the memories of anyone who gets too close. It'll cause a panic as soon as people realise.

She's quiet for a moment. 'I don't remember. I remember I was hired, and the details of the job and where I'm supposed to deliver, or at least I remember knowing them. But I've forgotten the initial-'

I drag her away.

'Where are we going?' she asks.

'Away from here for a start.'

'But I have to do something about it.'

She isn't struggling yet. I lead us at a fast walk before that changes.

'So we do nothing?' she says in an accusatory tone.

'We keep clear until we have a plan, so we can come up with one using our full faculties. Or what's left of them. We'll start with where you got the casket.'

She's silent, but I know without looking that she's frustrated. At least she doesn't fight me.

I have no intention of going back. There'll be some heroic idiot willing to face that thing once I've a way to deal with it. Thinking is what I bring to this, and I won't risk my ability to do so.

Secrets are my life, and no price is worth me losing my mind facing that demon.