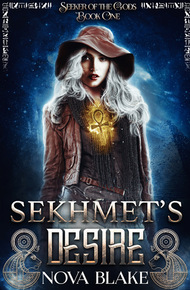 Nova is a lover of pizza, coffee, and zombies (in no particular order). She was raised on a healthy diet of fantasy, horror, and science fiction, and despite many attempts by various English teachers has refused to budge on her position that these are the best genres ever.

When she's not raising her horde of wonderfully creepy children, or dreaming of the day she'll have an army of ninja kittens, she's writing, reading, or playing games.

My name is Never, Seeker extraordinaire.

Or at least I was until I almost got a Prince killed, and now, no one will hire me.

Except for Jacqui Walker, my childhood nemesis. She offered me an olive branch dipped in gold, a way to win back my status. All I have to do is find the missing ankh of Sekhmet.

Never mind that it was lost a century ago. Never mind that others are looking for it too. Or that the Twelve – the very organization she hopes to present it to, the people who rule everything in this world – have asked me to work for them instead.

Torn between two powerful factions, either way I go, I'm screwed. And the closer I get to finding the pieces of the amulet? The louder I can hear the purring in my ears.

I looked up at my building. The lights were off in my apartment, but that didn't really mean anything. I headed around the back and fetched a knife from the lockbox I had connected to fire escape, gripping it tightly in one hand as I climbed the stairs. I unlocked the door and let it swing wide, reaching inside to flick the switch.

Still no sign of life. I reached out, pushing my magic to a use it wasn't made for, but I couldn't sense anyone else there. I shut the door and threw the bolt before moving room to room, clearing each of them before I could drop my arm and relax.

It was only when I put the knife down on the kitchen counter that I saw an off-white card with a crisp, tight fold. I picked it up tentatively. The card was thick stock, expensive, with a texture to it that I couldn't place. I opened it and read the words inside.

We have a job for you. Please contact us on the following number.

Well, that was interesting. Funny way to start a business arrangement—breaking into your prospective employee's house. Still, it didn't seem like they'd had any ill intent, nothing appeared to have been moved or touched, aside from the door, obviously. I dropped the card back on the table and rummaged around in the third drawer down, pulling out the bug finder.

It never hurt to be too cautious.

A quick scan of every room revealed nothing new; the only device in the house was the one linked to a black box device Bran and I had rigged. Each of us had a device in our homes that recorded everything and sent it to a secure site. Just in case.

As I said, it never hurt to be too cautious. We'd been bitten before, and it was bound to happen again.

Job done, I emptied out my pack and grabbed a beer from the fridge before setting up at the table. I let the footage and photos filter down from the drone into my cloud software and called Brannigan.

"Yeah, no drama. She was hot and heavy. If I'd been a few minutes later it would have been all over with." I took a sip of my beer and clicked open a new email to my client.

Bran huffed a laugh. "Lucky you got there then or it could have been a long night waiting for a replay."

"Tell me about it." I attached the files and hit send, leaning back in my seat with a smile.

"Hey, thanks for checking in. I know it wasn't a risky job but still..."

I licked my lips and leaned forward, picking up the card again, tracing a finger over the number. "Yeah, I know," I said absentmindedly. Did I tell him now, or wait to see what the job was? I didn't want to get his hopes up, and yet at the same time, I didn't want to lie to him... "I think I've got a lead though, could be a good job. I'm going to give them a call and see what it actually entails, but as soon as I've got the details, I'll let you know."

"Really? Where did the lead come from?"

"The sign, I guess? I don't even know. I came home and there was a slip of paper under my door." I swallowed another mouth of beer so that the bitter taste in my throat was from the alcohol rather than the lie. I didn't want him to worry about me, because he always did. Had to let him take a night off now and then.

"Right, well, don't stay up too late, and let me know about the job as soon as you do. Papa's gotta pay the bills, or you know, buy some food." He sounded glummer than I'd like, and I wished there was something I could do right now to alleviate it. But I was tired and his boat was too far away. And the fact that someone had been in my apartment made me want to stay here and double check—make sure no one else was getting in.

I'd need to research some better locks...

"I'll bring dinner to your boat tomorrow, okay? I should have been paid by then."

"Chinese?" he asked, hope soaking through the word.

"From your favorite place."

"Fuck yes, thanks Nev. Go get some sleep and I'll catch you tomorrow."

He ended the call and I tossed my phone onto the table before knocking back the rest of my drink. I was just about to go to bed when my gaze came to rest on that card again. I glanced at the clock. 11pm. It was too late, really. But they did say to call...

I pulled the card over and pinned it open with my empty bottle, the condensation on the outside soaking into the thick card stock, then I grabbed my phone and entered the number. My finger shook ever so slightly as I pressed the call button.

"Hello, Walker Incorporated. Who may I say is calling?"

"Thank you, Never. I'll put you right through."

But it was too late, the light melody of hold music drifted through my eardrum. In less than a minute there was a click, and a silky voice said, "Never, so pleased you could call."