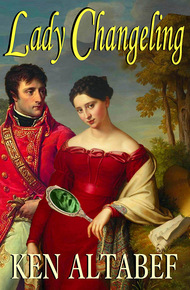 In the summer of 1750, Eric Grayson discovers his wife of ten years is a faery spy, a member of a treacherous race the British—and the Grayson family in particular—have hunted and reviled for many years. As his dark family secrets unravel, will Eric ever break the cycle of death and madness that haunts him?

Lady Theodora is caught in a desperate situation of her own. In order to fend off a monster from her past, she must completely destroy the man she loves. Who can she trust? Not Amalric, the deranged alchemist. Not Redthorne, the seductive faery assassin. Not Draven 'The Raven' Ketch, a mad pirate. And certainly not Meadowlark, Theodora's vengeful faery ex-lover.

Lady Changeling offers a satisfying mix of high fantasy and gothic romance with a touch of Lovecraftian horror.

A whiff of myrrh. The reek of faerie musk where it should not have been. That's all it took. And Eric Grayson awoke to a nightmare.

His wife of ten years lay beside him on their bed. He could see only the back of her head, a tangle of chestnut brown hair wild across the pillow, a small beauty-mark dark against the perfect skin at the nape of her neck. And yet, he was deadly certain. His wife was some kind of a monster.

A cold sweat gathered across his bare shoulders like an icy shawl as he listened to her gentle breathing. Tranquil appearances aside, something was terribly wrong. He felt it in the pit of his stomach like a thousand sour needles churning up a witch's brew. The silky cocoon of comfort and familiarity had begun to fray, the illusion parting at the seams to reveal a glimpse of the writhing horror that lay below.

Or maybe it was just a dream. The first few physical sensations of the day—a cold draft invading through the bedroom window and an ache in his shoulders and arms, a result of hard lessons doled out by his master-at-arms during the previous day's sparring session—these very real sensations slowly washed the lingering dream away.

The sun had just broken the horizon, the room still swathed in semi-darkness. The four-poster bed was as it had always been, the fine linen canopy, the sturdy oaken furniture. A vase of daisies and daffodils on the nightstand. Nothing had changed.

"Momma?" A sleepy voice called from the doorway.

Theodora rolled over, still half-asleep herself. She had a long, slender face with prominent cheekbones, a strong jawline and slightly pointed chin. A delicate mouth with thin but appealing lips curled upward at the ends to form a sensuous half-smile. Her nose was long and slender and just a little bit sharp, a proud, genteel nose worthy of any lady of high court. Her eyes fluttered open. Slanting slightly upward at the corners, they were caramel, a honey-tinted version of her long wavy hair, and just as soft.

"Momma?" asked James again. The boy remained squarely in the doorway, a slender ten-year-old dwarfed by the high mahogany molding. Eric watched silently from the bed as if he were merely an observer to his own family drama. He wondered what night terror had awakened his son at this misty hour. Perhaps the same nightmare which had roused him?

She took a slow breath and smiled. "It's too early to be up. Look—it's still dark outside. Back to bed."

The boy whimpered his disappointment.

"Come and give mummy a hug."

James ran into his mother's arms. She purred contentedly and planted a firm kiss on his forehead. "Back to bed now. And quietly, so you don't wake your sister."

Eric, propped up on his elbows, watched the boy scoot out of the room. Soundly ignored, he grumbled softly.

"What's the matter with you?" she asked.

"Hmm. Nothing. I suppose little boys only think of their mothers in the dead of night."

Theodora chuckled. "It's only fair. Nora always calls for you when she's having bad dreams."

Bad dreams. As far as bad dreams go, he was sure he'd just been having a whopping big one. But now the details had already faded away into the morning mist. He sat up in the bed, struggling to recollect. Something about Theodora…

"You look so grim," Theodora noted. She snaked a hand under the blanket and ran it across his thigh.

"Too early for the children to play," she added. "But what about us?"

Without thinking, Eric placed his hand over hers and pushed it away. He immediately regretted it. Was that really what he wanted to do?

Theodora rolled atop him, resting her elbows on his chest, her knees straddling his hips. Her long, fine hair brushed his face. She swept it across his cheeks and out of the way with a flick of her chin. Smiling, and so very beautiful, she kissed his cheek and neck, flicked a tongue against his earlobe. "Want to play?"

Eric was lost in the lush apricot and wildflower smell of her. Theodora ran a fingernail along his bare chest. She arched her hips, shifting her weight down against his groin. She leaned back, rocking slowly, her head thrown back, eyes closed.

Eric reached up for her lips with his own.

Across the cobbled courtyard, Meadowlark sneered. Perched high in an ancient oak tree, his legs propped atop a sturdy branch, his hands clasped behind his head, he would have appeared an errant schoolboy taking an unsanctioned break from his studies—that is, if anyone could see him at all. Mere human eyes would never pierce his disguise of green and brown, of feathered leaf and shaggy bark.

Shaggy bark, he thought, but my sight is keen in the dark. Not seen, but seeing. He had no trouble witnessing all the fervent gyrations of Lord Eric and his wife through a slit in their gauzy bedroom curtains. He heard clearly the lady's groans of pleasure, the sweet nothings she whispered in her lover's ear. Were they genuine? Even after so many years, he still couldn't tell.

He'd heard similar sounds from her honeyed lips when he and Theodora had intertwined years ago. He remembered a tryst under a moonlit sky. How she'd caressed him, so young and desperate, in those days. How tight she held him as they joined. He could still smell her, apricots and honeysuckle. He remembered her little cries of pleasure. Her startled gasp as lightning had flashed above their heads, cold splashes of rain as a sudden summer storm buried them in blue water.

The memory faded, the dream evaporating like the long-ago sheen of rainwater on lovers' skin.

Moans, groans, and bumps in the night. So what of it? She was skilled at feigning love now, with her fancy British Lord, but what about then? Had it ever been real? What was real? For ten years he'd watched and waited, wearing the crook of this branch smooth with the curve of his ass.

Fie! What did he care? What was ten years?

He flicked an acorn dangling from the branch. It plunked against the side of the manor house, but the distracted lovers did not notice.