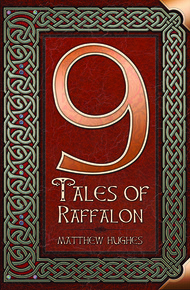 Matthew Hughes writes fantasy, space opera, and crime fiction. He has sold 24 novels to publishers large and small in the UK, US, and Canada, as well as nearly 100 works of short fiction to professional markets.

His latest novels are: A God in Chains (Dying Earth fantasy) from Edge Publishing and What the Wind Brings (magical realism/historical novel) from Pulp Literature Press.

9 Tales of Raffalon by Matthew Hughes

A THIEF IN THE DYING EARTH

In an age of wizards and walled cities, Raffalon is a journeyman member of the Ancient and Honorable Guild of Purloiners and Purveyors. In other words, a thief.

His skills allow him to scale walls, tickle locks, defeat magical wards. He lifts treasures and trinkets, and spends the proceeds on ale and sausages in taverns where a wise thief sits with his back to the wall.

But somehow things often go the way they shouldn't and then Raffalon has to rely upon his wits and a well calibrated sense of daring.

Here are nine tales that take our enterprising thief into the Underworld and Overworld, and pit him against prideful thaumaturges, grasping magnates, crooked guild masters, ghosts, spies, ogres, and a talented amateur assassin.

Raffalon clung to the wall of Hurdevant's keep, the adhesive on his palms holding him tight to the gray stone. Above him, no more than arm's reach above his head, the hinges of the small window creaked again. A moment ago, someone had opened the left-side panel; now it was the right's turn. Logically, the next event would be the poking out of a head. Raffalon would be discovered, if he hadn't been already, and the consequences would not redound to his credit.

Raffalon's profession was the transfer of valuables to his possession without consultation or consent of their owners. He'd been practicing it since boyhood and had become quite good at wall-scaling, lock-tickling, and ward-hoodwinking. He was particularly versed in the art of the rapid exit when circumstances turned adverse.

In order to avoid such exits, he preferred to choose his own targets, but he was not averse to hiring out his hard-won skills to others, so long as they met his fee. And provided that the proposed operation's level of risk fitted the thief's definition of acceptable.

Neither condition applied to the present situation, however. The risk of at least one thing going wrong, he had calculated when informed of the nature of the mission, approached near certainty. Worse, he was about to incur the enmity of Hurdevant, whose reputation for stringency had led his fellow magicians to dub him Ironhand—and he wasn't being paid so much as a bent sequint.

The griptight on Raffalon's left hand was losing its strength. He pulled it free and spat into the palm, re-activating its adhesive power, then pressed it again to the wall. In a few moments, he would need to do the same to the right hand, unless by then he was already being consumed by a blast of flame from the wizard's wand, or carried off by a summoned demon to its smoky lair, there to be used for unspeakable purposes.

A thief's credo is to avoid capture and punishment by any means necessary. But Raffalon had added a corollary to that code: when all is lost, at least go out with a bold face. He now set his features into as intrepid an arrangement as he could manage, and turned his gaze upward. He found himself staring, as expected yet hoped against, into the uncompromising visage of Hurdevant the Stringent.

"And there you are," said the wizard, as if continuing a conversation.

"Indeed," said Raffalon, seeing nothing to be gained by dissembling.

"Come up the rest of the way and through the window. I have disabled the spell that guards it."

Raffalon spat on a hand again and used the griptight to climb another arm's length. "Was it, by any chance, Bullimar's Differentiating Portal?"

Hurdevant snorted. "For a small window set high in a tower? Of course not. It was Pilasquo's Pinch."

"I don't know that one," the thief said, working his way up to the window sill.

The magician explained that, once Raffalon was halfway through the window, its frame would have closed upon his middle, squeezing it so tightly that he would have resembled one of those wasps whose thorax and abdomen are connected by a narrow tube of chitin.

"It won't do that now?" the thief said, one leg over the sill.

Raffalon dropped to the stone floor of the tower. He scowled when he saw that the small, circular room was empty—another element of the operation that the one who had sent him into peril had got wrong.

"What made you think I would use the Bullimar?" Hurdevant was saying. "It's for doors. Especially for hidden trapdoors."

The thief was too disgusted to answer. A moment later, he realized that Hurdevant was not accustomed to wait for responses to his queries. The soles of his feet became convinced that they were in contact with live coals. Hopping about, though instinctive, brought no relief. "Glabro!" he managed to shout.

The magician made a subtle gesture and the burning stopped. "Glabro Malaprop?" he said, and his grim lips almost achieved a smile. "You're another one of his?"

"Not by choice, I assure you!" Raffalon scuffed the soles of his climbing boots against the stone floor in an attempt to cool his feet. The action had no great effect, but the burning sensation was gradually subsiding of its own accord.

"But Glabro sent you? And told you that the window would be warded by the Bullimar?" The wizard snorted again; Raffalon was beginning to think it was a characteristic action. "Feckless scantbrain," Hurdevant concluded. "What made you a give credence to—"

But then a suspicion further clouded the grim face. He sketched an invisible figure in the air and Raffalon saw an arrangement of lines of green light, some straight, some curved, come to hover before the magician's eyes. After a moment, the thief realized that he was seeing a schematic of Hurdevant's estate. His captor studied it a while then wiped it away with a wave of one long-nailed finger.

"It occurred to me," the wizard said, "that you might be a diversion. But, no, Glabro does not rise even to that lowly rung on the ladder of cunning." He pulled his nose then stroked its end, apparently as an aid to thought. "I presume you were after the Sphere of Diverse Utility again?"

"I have never been here before," Raffalon.

"I am lumping you in," said the wizard, "with all the other thimblewits and donnydunces Glabro has sent since I won the Sphere from him—quite legitimately—in a contest of skill."

"He seemed to think you had bested him unfairly," Raffalon said.

"Well, that's precisely the problem with the poor dolt: he only seems to think." The wizard clapped his hands to signal that a new chapter was about to open. "Now, what to do with you?"

"You may not." Hurdevant spoke a syllable and moved three fingers in an unusual way. Raffalon's power of speech deserted him. "I sent back the last one inverted, wearing his innards on his outside. It doesn't seem to have made a useful impression."