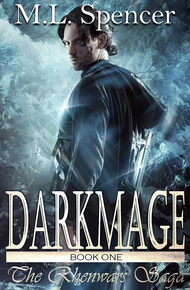 ML Spencer lives in Southern California with her three children and two cats. She has been obsessed with fantasy ever since the days of childhood bedtime stories. She grew up reading and writing fantasy fiction, playing MMORPG games, and living, as mom put it, "in her own worlds." ML now spends each day working to bring those worlds into reality.

Darien Lauchlin has already lost everything. Now the only thing he has left to lose is his soul.

The Well of Tears was created to harness the power of the Netherworld to prevent a magical apocalypse. Now Darien Lauchlin is the last surviving mage capable of reversing the destruction the Well unleashed. Darien will be forced to sacrifice everything of himself and everyone around him—all to preserve a nation of people who despise him.

Darkmage is the first installment of the Rhenwars Saga, a sprawling epic set in a morally gray world where there is no clear distinction between hero and villain.

Thunder ripped the sky, amplified to a throbbing din by the stone walls that rimmed the square beneath the Hall of the Watchers. Meiran Withersby felt the sound of it physically in her chest. Sheets of rain poured from blackened skies, pounding down on the roof of the cloistered passage above her. She glanced out through the narrow arches that lined the walkway but could make out nothing. Just a thick, choking blackness so complete that it seemed as if a dark pall had been draped down over the entire city, perhaps the entire world. The only light was the dim glow of the lantern that dangled from her fingers.

Lightning crackled and, for the briefest instant, Aerysius winked into existence around her and then disappeared again as abruptly. Meiran hastened her pace, wrapping the black cloak she wore more tightly about herself. Her feet moved with a pressing urgency, motivated by more than just the desire to find shelter from the elements.

In her right hand, she fingered a strip of parchment she'd found on the pillow in her bedchamber. It was written in the same, bold script as similar notes she had received in the past. The last one had been two years before and had contained an almost identical message: Meet me in the greenhouse. Fourth Watch. There was no signature—there never was. But Meiran already knew who the author must be.

She couldn't wait to share her secret with him, the one she'd been waiting two long years to whisper in his ear.

Finding that note had filled her with a dizzying thrill of anticipation. Her stomach had been in knots all day. She hadn't been able to concentrate on the simplest task. She had walked around feeling giddy, catching herself daydreaming at the worst possible moments. She couldn't help it, even though it was no way for someone of her station to behave. She was, after all, the most powerful Grand Master in all of Aerysius.

She was also a woman in love.

Lightning strobed the sky, followed immediately by a peal of thunder that shook the air. The wind was at her back, pushing her forward with icy fingers that rippled her cloak out before her. Her dark hair spilled like a fan before her face, whipping at her skin.

She reached the end of the cloister and burst through a massive, iron-shod door. It was not more stone, or even cold marble, that greeted her feet. Instead, Meiran found herself on a narrow path within an old-growth forest.

There were many greenhouses in Aerysius. Most were used to grow food crops, some for herbs or even flowers. But the enormous structure she found herself within was the duplicate of a temperate rainforest. A miniature environment filled with ponds and streams, vegetation and animals.

Soft magelight glowed from behind stands of trees, filtered up from the ground, filling the forest with an ethereal glow. Overhead, rain beat distantly on the shutters drawn over the glass rooftop to protect it from the storm.

As she moved deeper into the forest, it became impossible to tell the environment was artificial. The air was warm and heavy with humidity. Meiran followed the trail around the edge of a pond to a small meadow aglow with magelight that moved like mist over the dark blades of grass. As she stepped onto the spongy lawn, Meiran halted with a sharp intake of breath.

He was there, at the far end of the meadow. Standing with his back to her.

Heart pounding, she crossed the meadow in quick, soft strides. She was so excited. It was hard not to giggle as she dashed through the swirling magelight on the grass. When she reached him, she laid her hand on the soft fabric of his shoulder, her touch hesitant. Slowly, he turned toward her.

She recoiled her hand in shock.

"Were you expecting someone else?" uttered a cold, malicious voice.

An intense feeling of horror overwhelmed her as Meiran shook her head in confused disbelief. She turned, wanting to run away, but froze instead. The lantern slipped from her fingers.

Twin shadows moved toward her over the grass. Not shadows. Something much, much worse. As they neared, the dark forms coalesced into shapes that were vaguely human but featureless, like demonic silhouettes.

Meiran tried to scream, but her throat constricted instead. An intense pang of dread spasmed her stomach. The feeling intensified, became choking, immaculate terror. She couldn't move. She couldn't breathe.

A shadowy hand rose toward her, dark fingers groping to touch her face.

Instinctively, she reached within. But the attempt was pointless. There was only silence inside. The constant rhythm of the magic field was absent, as if it had never existed at all. She was powerless against this enemy.

When the chill shadow of the necrator touched her, Meiran collapsed.