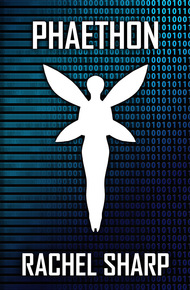 After a decade of touring the country, Rachel Sharp now lives in Vermont with several plants and her questionable sense of humor. She is the author of the Planetary Tarantella & Phaethon trilogies. Her short stories have been featured in Unburied Fables, Gay Apparel, and the upcoming Home for the Howlidays anthology from Tyche Books.

She also lives with chronic illness, plays ukulele, and tries to save the planet.

Hacker couple Jack and Rosie crack technology, but the newest device, the Phaethon, isn't like other phones. The parts are junk, yet it can do the impossible. Through gentle prodding and data theft, they learn it's powered remotely...by a living creature.

Cracking the Phaethon enters them into a war. Some, like Calthine, the bitter Bogle, are on their side. Others are controlled by a new type of fae; the bosses of the Phaethon corporation, who have steel for eyes and iron for souls. Now, the hackers have to fight creatures they've never heard of to save the friends they've just made.

Jack glared suspiciously at the Phaethon while peeling the plastic cover off of his noodle cup. Not just independent hovering movement, he thought, but full-on interaction with the physical world. There was no way. He was done trying to explain the Phaethon as a new and improved mobile device. The thing was impossible. Not just plain old futuristic-science-fiction impossible, which many people felt about perfectly reasonable advances in technology over the last twenty years. Alien-invasion impossible. Mermaid impossible. Straight-up magic impossible. The technology for this kind of artificial intelligence, situational adaptation, and natural-language responsiveness just didn't exist and wouldn't for a long time, if ever. It certainly wouldn't run on parts and software from before the advent of the camera-phone.

"Lassie, why don't you have a battery? How are you getting power?"

"I do not understand the question."

"First time for everything, then. Lassie, what do you run on?"

The Phaethon blinked at him and bobbed as if considering the question. Then, with a more lifelike voice than ever, it focused on him and said, "What do you run on?"

The apartment felt darker and more cramped every second. He realized that he was tempted to either run or throw the Phaethon out the window.

"Lassie, you told Rosie that you are alive. I thought you meant you were working, that you had power and were functioning. Was I wrong? Are you alive like I'm alive?"

"If that's true, then why didn't Rosie find...you...when she opened the case? It's all junk parts in there." He poured the water from the kettle into his cup, wiped a fork clean on the leg of his pants, and started stirring. The foam cup bordered on scalding in his grip.

The thing had told Rosie that it was a machine, and that it was alive. It couldn't be both. Even if someone had created sufficiently advanced A.I. to jump the sci-fi barrier and start thinking it was a real boy, that technology wasn't running on this shiny hunk of scrap. He sat back down in the folding chair, noodles balanced on his knee.

"All right. If you are alive, and Rosie didn't find you in the case...Lassie, are you in the room with me?"