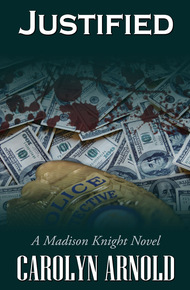 Carolyn Arnold is the bestselling author of the Madison Knight series, the Brandon Fisher series, and the McKinley Mysteries. Her love for writing dates back to her teen years, but her passion was reignited in 2006 when a fellow employee said "tell me a story." Since then Carolyn has never looked back.

Her writing has since been compared to New York Times Bestsellers such as JD Robb, Mary Higgins Clark, Sue Grafton, Michael Connelly, Tess Gerritsen, and more.

Carolyn was born in 1976 in a rural town of Ontario, Canada, and she currently lives with her husband and two beagles in a city near Toronto.

Madison Knight should have ignored the call. Now she is spending Christmas Eve dealing with her least favorite thing...blood and lots of it.

When a female victim is found in her home it has Madison and her partner tapping into the vic's personal life. With a rash of former business partners and lovers, all of whom wanted her dead, there are not enough hours to question them all.

But trying to find the person who had the most motive isn't all that's on Madison's mind. As she struggles to establish balance in her own life, she knows she has to get her focus back. Justice requires it.

When I decided to put this bundle together, Carolyn Arnold was one of my first picks. She’s a solid writer who hasn’t gotten nearly as much credit or success as she’s deserved, which I say without hesitation because Madison Knight is one of the most likeable characters out there. – Jason Letts

He had to do it. He had no choice. Pushed into an unpleasant corner, he had no other option. How could he allow himself to be walked all over, manipulated? All that he had sacrificed for her, laid on the line.

It was pitch black, the wind moaned and small flakes dared to precipitate. It was a bitter cold, the type he felt through to his bones.

He knocked on the door.

He had chosen the back side of the house for added seclusion. If the cover of the night wasn't enough, surely this approach would diminish the possibility of a curious neighbor trying to play hero. He didn't need any cops showing up. This was to be a private visit.

He knocked again, harder and more deliberate. A light came on inside followed by one on the back porch. Finally, he was getting some attention.

She opened the door the few inches the chain would allow. "What are you doing here?"

"Trying to reason with you." The chills left his body and a calm, radiant heat overtook him.

The door shut. The chain rattled. The door reopened. "You can't just show up whenever you feel like it." She let him in, more likely for her own comfort given the way she was dressed. Arms crossed in front of her chest, an act of modesty over a lacey piece of lingerie. He had seen it before. Shivers trembled through her, and she gripped her arms tighter. "What is it?"

He disregarded the tone in her voice, the condescending overture it carried. He ignored the body language that screamed for him to leave. He went to touch a ribbon that served as a strap.

She stepped back. "Please don't—"

"Claire, we're meant to be together." His lack of control surprised him; his voice had risen in pitch with each word.

There was more to her words. And the way she was dressed. "You move on already?" He took steps forward, heading for her bedroom.

She grabbed his arm and pulled him back. She didn't deny his accusation, and she refused to look at him when she did speak. "It was your choice. I gave you the option."

He swore her eyes misted over. "Not really much of one."

He shook his head, as if it would bury the jealousy. But the fact there was someone else here, lying in her bed, waiting on her to come back…

He would do what he came to do—regardless. He had too much to lose.