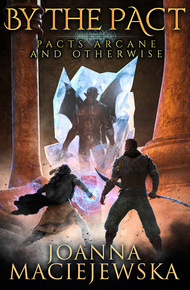 Born in Poland, Joanna spent most of her childhood in Poznan, then moved to Dublin, Ireland, where she lived for over 8 years. In 2016 she moved to the US, where she hopes to finally settle.

She writes speculative fiction, so it goes without saying that she's a fan of science-fiction and fantasy - mainly books, but also movies, comics and games (both video games and tabletop RPGs).

When she's not busy writing, reading, or gaming, she enjoys crafts and drawing.

By the Pact by Joanna Maciejewska

High mages lied: Veranesh, the demon who destroyed the continent is still alive. And it's up to their former student to expose the truth—even if it means another Cataclysm.

When Kamira, a once high mage student turned arcanist, discovers an imprisoned demon in underground ruins, she is forced into a pact that grants her powerful magic, but also ties her to the very demon that once devastated the continent… and Veranesh wants his freedom.

With one friend by her side, Veelk, a mage killer bound on protecting her, Kamira will have to outwit the archmages, other demons, and possibly her own demonic benefactor to survive. Her chances are slim, but with Veelk's ever-present sarcastic repartee, Kamira might just pull through.

Plots and schemes, power and means—sometimes the price for victory is choosing which friend will die, but when you only have one friend, the choice is… easy?

By the Pact – Chapter 3 Excerpt

When Veelk re-entered the chamber, Kamira was backing away from the demon. He stopped in the entrance, hoping to gauge the threat, but she seemed unharmed, and no malicious magic lingered in the air.

"You're insane! I'm not going to do it!" Kamira's shouts matched the horror on her face. "This is not what we agreed on!"

"I promised you your magic back." Veranesh's calm voice suggested no immediate danger. "How can I keep my part of the agreement if you're refusing it?" The light still emanated from the crystal, drowning the chamber in a cold blue.

"This isn't my magic! I want my pact back! I want my demon back!" Even though Kamira spoke with force, Veelk caught the panicky undertones in her words.

"That's impossible." Veranesh's calm voice, on the other hand, suggested he either didn't notice or didn't care about her reaction. "You'll have a new pact."

Holding in a smirk, Veelk entered the chamber. "Negotiations going well, I take it?"

Kamira's bewildered gaze sought his eyes. "He wants to make a pact with me, and I keep telling him it's impossible." She glanced at the demon, not bothering to hide her contempt. "His idea of an agreement is to kill me."

"I've never seen a ritual that would cause a pactee's death." Veranesh's mockery echoed within the walls. "Unless they did something foolish, like slicing their veins open."

She let out a groan, then took a deep breath. "You're too powerful for me. If we make a pact, I'll die the first time I cast a spell. I need… someone with less power."

Even though frustration still emanated from her, Veelk gave a nod to her somewhat composed explanation. It seemed that no matter her feelings toward the demon, she was willing to make things work, and that meant they'd both stay alive for a little longer. Unless, of course, either she or Veranesh lost their patience, and Veelk wasn't sure the demon would be the first one to give up. When it came to dealing with stubborn people—and demons—his companion rarely exercised her otherwise praiseworthy discipline.

Veranesh's laughter filled the chamber, and Kamira gave him a nasty look, the one Veelk knew she reserved for the people she really wanted dead. Many of them, in fact, were those stubborn ones who refused the reason.

"If you prefer a more promising arcanist, I can always try to find you one," she grumbled.

"I think you have enough promise within you. I wouldn't waste my time otherwise." Amusement still lingered in Veranesh's words.

Kamira huffed. "You don't understand. I had a pact with a minor demon."

"Have you ever tried to summon a more powerful one?"

"I was told that no powerful demon would make a pact with me." She looked away, and Veelk had no doubt it wasn't easy to admit, especially for someone who'd turned down all the prestige and true power and was left with scraps of magic from a mediocre pact.

Veranesh's lips stretched into a grin, making his expression almost amiable. "Told by your own yalari, I presume?"

Silence followed as Kamira stared at the demon, dumbfounded. Then she cursed, and Veelk smirked at her creative use of the arcane language to express her anger.

"That lying, treacherous… Of course she'd tell me that. I'm such a fool."

Veelk refrained from a comment, and Veranesh seemed to have enough sensibleness to remain silent as well, so Kamira muttered to herself for a while, and the aggravated tone of her voice left no doubt about what she wished for her former pact demon.

"You'll have to get used to such power, but until you do, I'll make sure you don't draw too much and kill yourself by chance," the demon said when Kamira's bickering hushed. "Any kanayalari can do that. Only the minor yalari can't control how much you draw."

She nodded but kept eying the demon with suspicion. "You could be deceiving me as well, since you're of the same kind. But I'll make a pact with you."

"If you wanted me dead, you wouldn't have to trick me in the pact, and I need my magic back, or I'll be useless." Kamira shrugged.

Veelk smirked at that. They both suspected Veranesh was lying to them, but magic was only magic, no matter which demon granted it. And with it at her disposal, they could find a way to thwart Veranesh's plans, whatever they were.

Kamira fished out a piece of chalk from her bag and found a rubble-free spot on the floor. In the blue light, she drew symbol after symbol.

Veelk took that time to approach Veranesh. "I've found the creatures you asked for. Two nightflies and a lizard, stunned but alive."

"Leave them by my prison, mage killer. I'll do the rest."

Veelk didn't ask any questions as he set them down. The sooner they were done, the sooner they could get away from the wretched being.

Kamira seemed preoccupied with her task, and he had to admit that with all her loathing comments toward demons, she respected the old ways, the ways of arcanists: her circle was perfect, with each line carefully drawn and each symbol in the right place, and all of it done in a half-ruined chamber filled with rubble, dirt, and barely enough light. Such dedication and precision would've seen great achievements had she stayed in the High Towers, and Veelk smiled at the thought. Had she not shunned the high magic and became an arcanist, she would have never saved his life. Instead, he might have taken hers.

But there she was, an arcanist, and a bloody good one. On that, Veelk and the demon agreed.