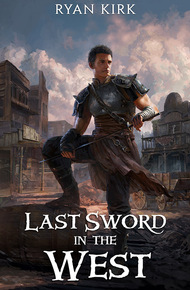 Ryan Kirk is an author and the founder of Waterstone Media. He is best known for his bestselling Nightblade series of fantasy books. When he isn't glued to a computer screen, he can often be found outdoors, hiking through any woods or mountainous terrain nearby. To learn more about his works, visit www.waterstonemedia.net

Last Sword in the West by Ryan Kirk

Never bring a gun to a sword fight.

Years after the conclusion of a civil war, Tomas wanders the endless grasslands of the frontier, still searching for an elusive peace. He dreams of finding a quiet place, far beyond the ever-expanding reach of civilization, where he can sheath his sword for good.

But he can't look the other way when he passes through a town caught in a duel between two powerful organizations. The graveyard outside of town is full, and innocents hide in their homes, hoping to survive the coming battle.

Before long, Tomas is caught within the web of the escalating conflict, a lone swordsman standing against two violent forces that seek to control the town and the unnatural power it contains. He quickly appears destined to join countless others in their unmarked graves.

But Tomas has a secret, too. And it would be a mistake to underestimate him.

His war isn't over yet.

A cold wind snapped through the tall grass, and Tomas glanced behind him as though worried the ghosts of his past had finally caught him.

No spectral shadows pursued him this night, though. Tolkin set on the western horizon as Shen rose in the east, the dual moons casting plenty of light. The grasses surrounding him stood tall enough to hide an army, but armies rarely traveled this far west. He saw no one, living or dead, for as far as his sight could carry.

Tomas kept his arms folded across his chest inside his robes. The wind stole the warmth from his body when it gusted. He felt Elzeth stir, but did not wake him. The night wasn't that cold.

The trail he followed barely deserved the title. It had once been used by local game, perhaps, but not recently. And there wasn't a single footprint to be found. He wouldn't have been surprised to find his feet were the first human ones on the trail.

Just as he desired.

But even out here, humans marched relentlessly west. A sliver of Tolkin was still visible on the horizon when Tomas came across the road.

It was little more than two rutted wheel tracks, but Tomas growled quietly at them anyway. He looked east, where the carts had all come from, and he clenched one of the long daggers hidden underneath his robes.

His anger wakened Elzeth. "Haven't seen any sign of others for three days," he said.

Tomas looked to the west. It was the same direction he meant to travel. The game trail hadn't been much more than a passing hope, a vague dream of roasted meat. But prey around here was either scarce, or better at avoiding him than he was at finding it.

His stomach rumbled at the thought of a full meal.

He followed the road west. Where there were humans, there was food.

Only a few miles later the road split in two. One set of ruts turned slightly to the north. The others went straight west. Tomas bent down and felt each set with his hand. Most travelers apparently preferred the path that led west.

No sign or marker gave him any further guidance. He found a stick on the ground and tossed it in the air. It spun lazily over his head, then landed, pointing roughly north. Tomas took the road that turned that direction.

He found his destination sooner than he expected. Shen hadn't even reached its zenith when he spotted the flickering lights of a watchtower off in the distance. Elzeth stirred again, and Tomas' eyes sharpened.

There wasn't one watchtower, but two. The closer of the two almost blocked Tomas' line of sight to the second. He frowned as he looked around. One tower was unusual enough in these parts. He'd never heard of a town with two. Both had watchers within.

"What do you think?" Tomas asked.

Tomas grunted. He felt the same. But the idea of a warm meal proved a temptation too great. He continued on.

He heard the town not much later. It sounded like a celebration, like the town knew just how unlikely their continued survival was, and they shouted their defiance to any who dared come close.

Or, Tomas thought as he approached, everyone was simply raging drunk.

The sounds brought a hint of a smile to his face. Once, this town might have been his kind of place. Perhaps someday, it would be again. A place where he could happily disappear into a crowd of faceless revelers.

Despite the din from the town, Tomas heard her before he saw her. The tall grasses and softly rolling hills hid her until he was almost next to her.

He slowed but didn't stop.

There was no mistaking the sound of a mother weeping.

Tomas stopped beside a fence, short enough to easily step over. Straight lines of grave markers proclaimed the purpose of the small plot of land. The markers were in the style of the old faith, a simple square post, the deceased's name and age at death inscribed in the wood. There were quite a few markers for a town this far west.

A man and a woman knelt next to one of the graves. The dirt of the grave was dark and loose. Quite a few of the plots nearby looked new, too. The wild grasses hadn't even had time to grow on most.

Though Tomas stood a dozen paces from the grieving couple, he could read the name and age of the dead. Their son, he assumed, had been young. He watched in silence for several long moments, feeling like an intruder on an intimate scene. The couple was so wrapped up in their grief they didn't even notice him.

A particularly strong breeze arose, and Tomas' cloak snapped in the wind.

The man's head twisted rapidly at the sound. He took a step back at the sight of Tomas, but Tomas held up his hands in a gesture of peace. The woman made no motion at all. Grief had become her whole world.

His presence noticed, Tomas stepped over the fence into the cemetery. Entering the grounds by any means except the gate was considered a sin by the faithful, but Tomas had long since stopped caring about their opinion.

The grieving man looked torn between anger and fear. In a few moments, one would take over, but Tomas paid him little mind. Moving deliberately, so as not to further frighten the man into rash action, Tomas reached into a pocket of his cloak to pull out a small bottle.

He stopped beside the grave, and the mother's eyes saw him for the first time. Before she could react, he pulled the stopper from the bottle and took a sip.

The fine wine was a blessing for his dry lips and throat. The vintage was one of the best he'd ever tasted. Complex layers of flavor coated his tongue, and for a moment, he hesitated. The wine was likely worth several times whatever this couple made in a year.

And it was really good.

He took one more sip, savoring the experience, relishing the pleasure the wine gave him.

Then he took the rest of the bottle and poured it on their boy's grave marker. "No one should pass without having tasted a fine wine," he said.

When they realized what he had done, both parents bowed deeply to him. When the mother rose, she reached out to clasp his hand. Her grip was cold as ice, and Tomas let his hand warm hers. Tears streamed down her face, and although she couldn't bring herself to speak, she nodded to him.

Tomas returned the gesture and let her hands drop.

When he raised his eyes, he met the hard glare of the father. The older man's gaze traveled down to the sword at Tomas' side, then back up.

"You another mercenary?" he asked, the word a curse.

The man laughed, the sound bitter and harsh. "You will be soon, if you're going into town."

Tomas glanced that way, the town barely visible from where he stood. Only the dual watchtowers served as obvious landmarks.

He turned to leave the couple to their grief. But he had loosened something in the father.

"A tough man, eh?" The insult was practically shouted, and Tomas winced against the disregard to the dead. "My boy was strong, too. One of the best swords in town. Ask anyone. Didn't matter one bit, though. Not with a dagger in his back. And it's all because of you and your lot. I hope your soul burns!"

Tomas nodded, then left the cemetery.

He didn't know if the father's last words to him were meant to be heard or not. Tomas didn't turn to see, and they were spoken softly.

"You better know how to use that sword, son. If you die a stranger in this town, no one will dig you a grave."