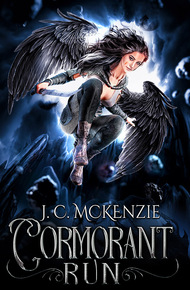 J. C. McKenzie is a book loving, gumboot-wearing, unapologetic science geek. She predominantly writes urban fantasy and post-apocalyptic dystopian fantasy with strong romantic elements. When she's not spinning tales, she's in the classroom sharing her passion for science and mathematics while secretly warping the young impressionable minds of our future to carry out her evil plans for world domination. She lives in the Pacific Northwest with her family and a feisty dog named Angus.

Nobody crosses the Carrion Channel.

As a messenger for the Eyrie's spymaster, Cora regularly braves the dangerous passage infested with sea monsters to reach a land filled with vicious arrow-toting humans.

As if her job wasn't hard enough, she's now responsible for escorting the arrogant heir of the Eyrie across the treacherous stretch of water. Prince Ronin needs to broker a truce between two feuding realms and Cora needs to keep her former crush alive without throttling him or revealing the key to her success.

With everything she holds dear on the line, Cora needs to succeed, but Ronin seems intent on pushing all her buttons and someone else appears determined to sabotage their plans. In a land filled with unknowns, Cora is only sure of one thing: she's not the only one with a secret.

J.C. McKenzie is one of the few authors in Magic & Mystery that I've had the pleasure of meeting in person. She is a bright and lovely lady who doubles down on the niceness—a Canadian and a schoolteacher. Don't let appearances fool you, however. Her stories are packed with action and romance, as well as spectacular world-building. I am thrilled to have J.C. participating in this collection with her urban fantasy Cormorant Run.

Isle and Eyrie is a two-book series and a spinoff of her fan-favorite, Crawford Investigations. – Melissa Snark

"Do you always talk when ordered not to?" she bit out through clenched teeth. Now was not the time to strike up a conversation. The Sea Beast had stirred. Cora felt his energy rising and vibrating in her bones.

Ronin said something, but she tuned out his deep rumbling and focused on the beast. His hunger was so strong, it was palpable. Her stomach rumbled. The feeling intensified, growing stronger.

"Up!" she yelled. With a strong pump of her wings, she strained upward.

The bird-brained prince gaped at her.

She swooped down, gripped a fist full of his hair and yanked.

"Up!" she screeched again, straining for the angry sky.

The tension from pulling his hair eased as he caught up to her.

"Move!" she hissed and let go of his hair. The energy pooled in the depths directly below them. The monster was too close.

"Move!" She beat her wings frantically. It wasn't enough. They weren't going to make it.

The Sea Beast burst from the ocean. Only his gaping mouth with rows of sharp jagged teeth and the dark depths leading to his empty stomach were visible. An ambush attack from below. The giant monster thrust upward from the ocean, driving his toothy mouth closer and closer toward them.