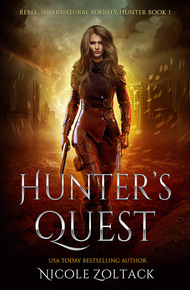 When she's not writing about knights, superheroes, or witches, she enjoys spending time with her loving husband, three energetic boys, and two precious girls. She enjoys riding horses (pretending they're unicorns, of course!) and going to the PA Renaissance Faire dressed in garb. She'll also read anything she can get her hands on. Her current favorite TV shows are The Witcher and Stranger Things.

Rebel has the best job in the world. She's a bounty hunter. And her targets are vampires, werewolves, shifters, and other supernatural entities.

Being a supernatural bounty hunter isn't an easy job, but it's necessary, and it's training. Because Rebel has a quest, one that might kill her, but then, that's a typical day in the human's life.

Yes, she's human, but that hasn't stopped her yet, and it won't stop her now. She will learn who or what exactly killed her brother.

Nicole Zoltack is a USA Today Bestselling Author whose stories encompass sweeping fantasy subgenres from superheroes to fairy tales to urban tales. The author and I have worked together professionally on several projects, and I am proud to call her my friend. It is my pleasure to have her returning to StoryBundle as part of Magic & Mystery.

Hunter's Quest is an Urban Fantasy about a supernatural bounty hunter and heroine named Rebel. Come along on a storytelling adventure full of exciting twists and turns. Hunter's Quest is the first book in the three-book Rebel, Supernatural Bounty Hunter series. – Melissa Snark

The vampire doesn't come for me. No. It's the whisper of clothing on clothing that catches my attention. Not the normal sound of clothing when someone's walking but from an arm being grabbed. It's a subtle difference, but it's one I've had to learn to distinguish.

I glance into the nearby alley. Two forms are there, one taller and leaning over the other. Even if it's not the vampire, I want to check this out. I don't normally interfere with matters between people, but if I need to, I will.

"You will hold still," the man says, his words hardly audible, the strength and power of conviction in them enough to make me pause mid-step.

He's a vampire all right, and he's using his power of forced will on the woman.

But is he the right vampire or not?

Doesn't matter. I don't want her to be bitten.

I take a step closer and eye his ears. They're pointed. Yes, this vampire has a fairy ancestor somewhere along the way.

This is the one I'm to take out.

Without delay, I whip out my pistols. "Leave her alone!" I call out as I shoot both of my weapons.

One of the shots goes wide, but the other buries itself into his shoulder. The vampire draws back and hisses at me. At the sight of his bloodstained teeth, I curse myself. I had been too late. The human has been bitten.

But that's only one strike—one stake?—against me. Strike or stake two is from the vampire not falling to the ground. He's not dying.

The vampire releases his hold on the human, and she slinks to the ground. He brings his hand up and wipes the blood from his chin with the back of his hand.

I fire again and again, but the vampire stalks toward me at an exaggeratedly slow pace. Even though I'm hitting him, he's not reacting from pain.

The stupid genie. He got the age of the vampire wrong. Fangs here is far older than my client thought, so I didn't use a strong enough dose.

I toss my worthless pistols aside. They're too hot from being shot so many times for me to put them away immediately. My right hand opens the pouch attached to my upper thigh, and my fingers curl around small iron balls as my left retrieves a dagger from inside my boot.

The vampire's foot slams against my chest, and I go down hard. In seconds, he's on top of me.

I wiggle beneath him, more to distract him than to try to dislodge him, and I bring the hilt of the dagger against his throat.

He goes to knock the dagger from my hand. "You do not tell me—"

I shove an iron ball into his mouth.

The vampire gags and tries to spit it out, but I use the hilt of the dagger to keep the ball in place. Not all paranormal creatures can be injured by iron, but a good majority can.

The vampire foams at the mouth. His body twists and convulses. His body is like a dead weight on me, and by the time I can shove his fallen off my body, I realize he's actually dead.

That was fast. The bullets must've hurt him some even if he didn't outwardly show it.

Abandoning him for now, I rush over to the woman. Her glassy, lifeless eyes don't see me, and I mutter a curse. Stake three. I didn't prevent her from being bitten or from dying.

From my pouch, I remove a small vial and sprinkle some fairy dust onto her wound. Although she's dead, the skin still heals. I can't have anyone realizing she died from puncture marks from fangs.

Furious, I march back over to the vampire. He won't turn to ash until the sun rises. With my dagger, I cut out his fangs.

Once it's dawn, I call the police and leave an anonymous tip for them to check the alley. I don't want the woman to be left in the alley longer than is necessary. She deserves to be claimed by her loved ones.