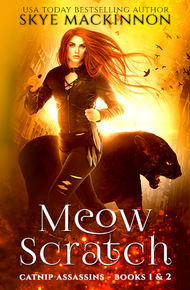 Skye MacKinnon is a USA Today & International Bestselling Author whose books are filled with strong heroines who don't have to choose.

She embraces her Scottishness with fantastical Scottish settings and a dash of mythology, no matter if she's writing about Celtic gods, cat shifters, aliens or the streets of Edinburgh.

When she's not typing away at her favourite cafe, Skye loves dried mango, as much exotic tea as she can squeeze into her cupboards, and being covered in pet hair by her tiny black cat.

Two books in one!

Kat is used to killing people, but for a handsome donation to her catnip budget, she's willing to do the opposite and help solve a murder - even though it sounds boring as hell. That is, until she finds some body parts in her fridge, makes friends with the neighbourhood cats and realises there may be an assassin better than her.

Add in a bunch of enemies determined to harm those she loves, secrets from her past, and three pesky men she can't shake, and her life is nothing short of chaos.

An urban fantasy romance full of cats, secrets and murders. Books one and two in the bestselling Catnip Assassins series.

Skye MacKinnon is a USA Today Bestselling author who embraces her Scottish heritage by penning fantasy action-adventure set in her homeland. She loves tea, mythology, and cats, so it is no great surprise that her series is named Catnip Assassins. The author is always a pleasure to work with, and I am delighted to welcome her to the Magic and Mystery StoryBundle. Her two-book bundle includes Meow and Scratch. – Melissa Snark

There's a head in the fridge. I sigh. Not again.

My friend laughs. "Until you fix the morgue's cooling chamber, the fridge is the only place to keep them."

I groan. We've had a problem with that cooling room for two months now. Whenever I think it's fixed, it stops working again. It's like the basement is haunted.

"I'll get on it," I promise. "We just got a very rich new client, so I'll be able to afford a professional handyman this time."

Not Jock from around the corner who did it for free in the hope for a kiss from Lily. I think he made it worse. And didn't get a kiss, obviously. Lily isn't into guys although she doesn't usually tell them. She likes to use her looks to her advantage.

I close the fridge, unwilling to stare into the dead woman's eyes for much longer. To be fair, one of her eyes is missing, but while it's not enough to put me off my dinner, it's also not very appetising.

"Get a second fridge for now," I tell Lily. "I think you need it often enough to warrant the cost."

She grins widely. She likes to play with her prey when she gets the chance. Sometimes, that involves taking random body parts home to later send them to her marks' families. That may sound evil, but actually, Lily is a really nice girl. She just has a bit of a violent streak.

"What's for dinner?" I ask, now that I know that there's nothing edible in the fridge.

"Benjamin was going to bring home some takeaway," she says with a shrug. "He's not home yet though, so we may have to wait for a bit longer. Hungry?"

I nod. "Could eat a dinosaur."

She laughs. "I don't think they're on the menu. Let's see what's left in the living room. I think there was half a bag of crisps left last night."

I don't meet her gaze. "Not anymore."

Lily puts her hands on her hips and glares at me. "Glutton."

I shrug. "They were there. I'm an assassin, I kill things. Even if it's just crisps. They're basically dead potatoes."

She chuckles. "So, what's this new rich client about? The one who's financing our new cooling chamber?"

I follow her into the living room, where she magically produces a bar of chocolate and a handful of dried peanuts. They look drier than they should, so I stick with the chocolate for now.

We throw ourselves onto the biggest sofa. It's not my furniture, at least I didn't buy any of it. It came with the house. I've been planning to get something more to my taste at some point, but money's been tight. When the mysterious man offered me a 'cash injection' to start my business off with, he was talking about a rather small syringe, and I used most of that to pay off the Pack. I shouldn't complain though. I've got a house, an office, even a morgue. I had none of that before. And I even got rid of my collar. Win-win.

"He wants me to find whoever killed his brother," I say with a certain distaste.

I shrug. "I've got permission to kill the killer, if I find them."

"That's weird. Why would he come to you?"

"No idea. Maybe the Pack refused his request. Maybe he only knows about me and not about any of the others in town. I have no clue, but the pay is totally worth the confusion."

She raises an eyebrow. "How much?"

I give her a cheeky wink. "Enough. We'll be able to fix the house, pay ourselves some nice salaries and feed a few stray cats at the same time."

Lily chuckles. "You need to stop feeding them. I had two kittens sitting on the doorstep this morning, begging for food. I think they're beginning to learn to come here if they're hungry. That's all your fault."

I sigh. "Okay, and friends. Felines and non-feline friends. Better?"

"Much. How are you going to find the killer, though? You don't have any experience with solving murders."

"I'm sure I'm going to come up with something. First of all, I'm going to inspect the crime scene, then find some witnesses. That's how they do it in books."

She laughs again. "You're going to crack this case, I'm sure. Let me know if you need my help, although I'm quite busy with my current mark. He's such a bore, but he loves his new girlfriend." She chuckles. "Pity she's not actually real."

Lily grins widely. She's a predator playing with her prey before killing it. She loves to make men go crazy for her, then kills them right when they realise that they've been fooled. Breaks their hearts before stabbing them. She's evil in a fun way. Just like all of us. M.E.O.W., my team of outcast assassins and ragtag thieves. So far, there are only four of us, but we've already managed to make a name for ourselves. Our reputation is increasing with every kill, and we're very efficient at killing. I still can't believe that six months ago, I was a slave, working for the Pack because they had me collared. Now, I'm my own woman. A businesswoman. I work for myself, pay myself, even employ other people. And not a single one of them is collared. They're all here because they want to be.

I yawn, tiredness catching up with me. I was up late last night, running over the roofs of the town, checking out the location of an assassination we're planning. I'm likely going to pass it on to one of the others now that I have a more lucrative job. This strange murder case is getting priority. We need the money.